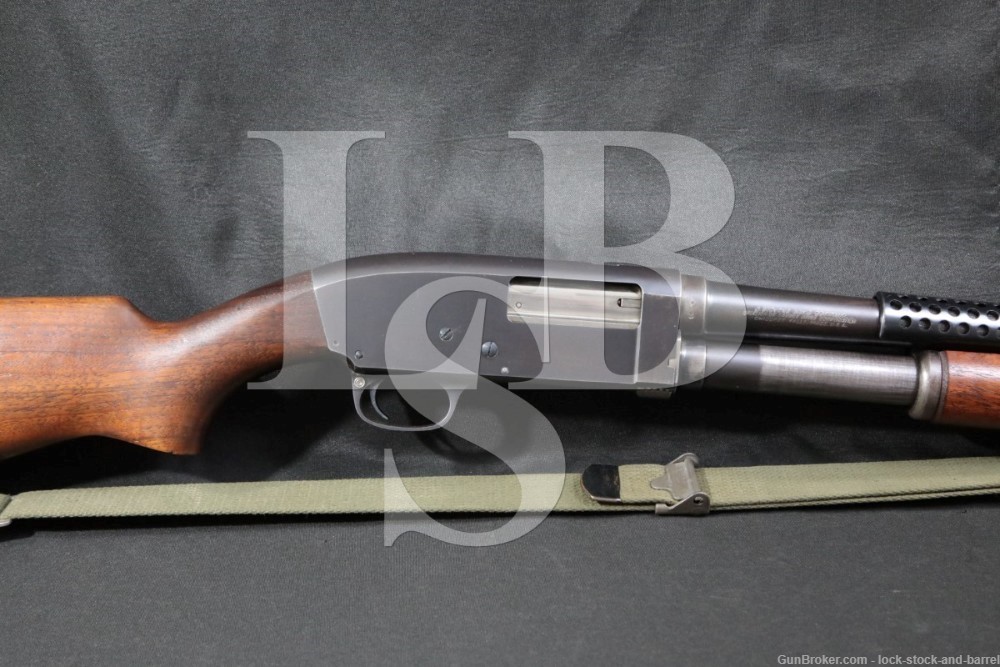 Markings: The left side of the barrel is marked “PROOF TESTED – 12 GAUGE / -2 3/4 INCH CHAMBER-“, the right is marked “J. STEVENS ARMS COMPANY / DIVISION OF SAVAGE ARMS CORPORATION / CHICOPEE FALLS, MASS. U.S.A.” (correct marking placement for a trench-gun). The right of the chamber boss is marked with “P” over a flaming bomb Ordnance mark. The left of the barrrel extension is marked with an ovalled “SP” over “25774” (the barrel must be removed to view this marking). The left of the receiver is marked “U.S.”, “MODEL 620”, the left-front is marked “P” over a flaming bomb Ordnance mark. The front face of the trigger assembly at the rear of the loading port is marked “25774”. The bottom of the grip has an Ordnance eagle cartouche.

Sights / Optics: There is a brass bead at the front of the bayonet mount/handguard assembly. The barrel is NOT drilled for a bead.

Stock Configuration & Condition: The stocks are two piece smooth walnut with semi-pistol grip, straight comb and serrated black hard rubber buttplate. There is a sling plate inlet to the belly. There are a few scattered light nicks, scuffs and scratches. The left of the buttstock has a few more notable marks above the sling plate and there are a couple of more notable nicks at the bottom edge of the grip. There are no chips or cracks. The LOP measures 13 7/8? from the front of the trigger to the back of the buttplate. The plate has light wear at the heel and toe with one more notable nick at the heel on the left and well defined serrations. Overall, the stocks are in Very Good-plus condition. The Ordnance cartouche on the bottom of the grip is not a WWII period marking, it’s not clear if it was applied during some sort of refurbishment or if perhaps the stock has been replaced.

Finish Originality: The bayonet lug/heat shield appears to have been refinished. Otherwise, the finish is Original.

Bore Condition: The bore is mostly bright. There is some minor oxidation in the bore at the muzzle-end.

Overall Condition: This shotgun retains about 87% of its current metal finish. The finish is thinning at all edges. There some scattered light wear on the barrel, mostly at the rear-end. The action shows operational wear, most notable on the mag tube. There is discoloration on the bayonet lug an don the front of the heat shield. There are a few scattered light nicks, scuffs and scratches with infrequent minor surface oxidation. The screw heads range from sharp to tool marked with strong slots. The markings are clear. Overall, this shotgun is in about Very Good-plus condition.

Mechanics: The action functions correctly. This shotgun will slam-fire as designed. We have not fired this shotgun. As with all used firearms, a thorough cleaning may be necessary to meet your maintenance standards.

Our Assessment: John Browning filed a patent for a “hammerless” shotgun with a unique take-down barrel and locking breech block on 10 Jul 1903, it was approved on 7 Feb 1905 and along with a separate 27 Aug 1907 patent, which applied to the connection between the slide arm and the fore end, became what would be the Stevens Model 520 shotgun. The same design would also be used for brand-name guns made for Western Field and Sears and would slowly be developed and improved for the next few decades with the model 620 introducing a more modern rounded receiver shape. When the United States entered WWII, Stevens was one of the manufacturers called upon to produce arms for the military, and many of the 520/620 shotguns would be used for aerial gunnery training, recreation, guards and MPs. This model 620 has the proper markings, configuration and is in the correct serial range for a trench-gun, with its 20? Cylinder Bore barrel equipped with a combination bayonet lug/heat shield. With approximately 12,000 620A models procured during WWII, it is one of the less common martial shotguns of the war. This example appears to have had its heat shield/bayonet lug refinished/refurbished, and there is a cartouche on the stock which may also imply refurbishment, but its serial-matching barrel and receiver retain their original brushed blue finish. The placement of the barrel markings, where they are not covered by the heat shield, tells us that the gun was originally produced as a Trench Gun, so this would make a great addition to a combat shotgun or WWII small arms collection. It probably wouldn’t do too bad as a home defense gun, especially if you put a M1917 bayonet on the lug. Please see our photos and good luck!