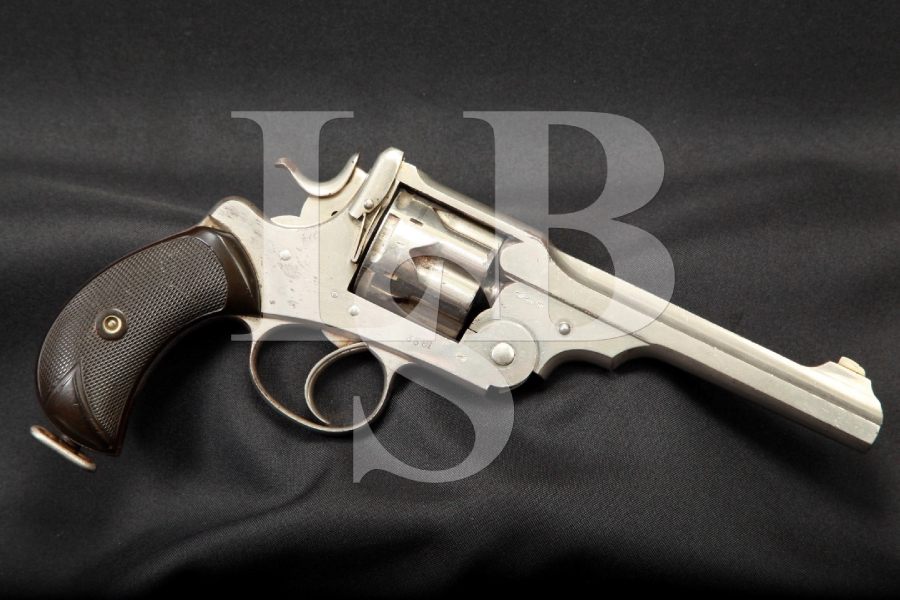 Barrel Length: The 6” barrel is round on the bottom with flat sides and a full length top rib.

Sights / Optics: The front sight is a German silver rounded blade fixed to a raised base on the barrel. The rear sight is a “U” notch at the bottom of a “V” in the top of the barrel latch.

Stock Configuration & Condition: The grips are black checkered hard rubber on a birdshead grip frame. The grip is comfortable to hold, but we wonder how much the revolver would have twisted in the shooters hand when firing one handed. We have never seen a birdshead grip on such a large revolver before. When this model was introduced, a ‘flared” grip was a six shilling option. The grips show a few light handling marks and small compression marks on the inside bottom front corner of each grip.The right grip has a chip off of the top rear corner. The checkering shows light wear in the left grip and light to moderate wear in the right grip with mars on both sides. The grips are in about Very Good to Fine overall condition.

Type of Finish: The finish is nickel plated.

Bore Condition: The bore is bright and the rifling has seven wide grooves with narrow lands. The lands show light wear on their inner edges but flare into the grooves with no hint of a sharp angle. As near as we can measure, the groove to groove diameter is 0.452”. Metford rifling is supposed to have grooves of 0.150” and lands of 0.0506”, with a groove depth of only 0.005”, and if this isn’t Metford rifling, is it pretty close to it. There is very light erosion near the muzzle.

Overall Condition: This handgun retains about 85% of its metal finish. There is surface loss on the backstrap and front strap, with spots of surface loss scattered around the rest of the revolver. The exposed metal shows erosion. The barrel shows small compression marks on its edges with numerous small marks and a few larger marks on its underside. There is a small compression mark on the top right of the top strap, and small compression marks on the lower edges of the frame, The left side of frame has several deep scratches below the barrel latch and the right side shows several scratches with compression marks below the front edge of the cylinder window. There are several moderately deep compression marks on the underside of the frame in front of the trigger guard and the cylinder has a light drag line. The hammer checkering is sharp with moderate wear on the back edge. The barrel latch checkering is also sharp but distressed on the outside surface of the latch. The screw heads are mainly sharp but with marks of a screwdriver. The markings are clear except for those on the circumference of the cylinder and right rear of the frame which are tiny and not well stamped. The lettering on the top of the barrel is very sharp. Overall, this handgun rates in about Fine to Excellent condition.

Mechanics: The action functions correctly. There is a barely perceptible amount of play in the cylinder and just a hint of play in the barrel lockup. The single action trigger pull is crisp. The extractor has three equally spaced pins to guide it as the barrel is opened and keep the extractor from binding. We did not fire this handgun.

Our Assessment: From “Webley Revolvers” by Bruce & Reinhart: “The Webley W.G. Model 1889 revolver was the first to have a year of issue date stamped on them. Prior Webley models are almost impossible to identify correctly except by very experienced collectors. The revolver’s “W.G.” marking was meant to represent “Webley Government” model. This model was sold to both civilians and to officers of the British Army, and there was also a target version available with target sights. A conventional flared grip in lieu of the birdshead grip frame was also available. The W.G. revolvers achieved almost immediate success in shooting matches. At the 1889 NRA Wimbledon Camp matches, celebrated American shooter Chevalier Ira Paine found his revolvers were not eligible, picked-up a Model 1889 he had never shot before, and obtained three “Highest Possible” scores with it.” This revolver has a 6” barrel marked with the distributors name in large lettering. It is nickel plated and both the frame and cylinder have the same serial number, although there are three different numbers on the frame that could be construed as a serial number. The revolver is in about Fine to Excellent condition with 85% of its original finish remaining. There is surface loss on the backstrap and front strap, with small spots of surface loss scattered around the rest of the surface, with the exposed metal showing erosion. There are also handling marks and compression marks in finish. The grips are checkered hard rubber on a birdshead grip frame and show two small compression marks and light wear in the checkering with mars on both sides. The bore is bright but with some light erosion. We believe the rifling to be Metford. This is a very well made revolver and we can see how the target version could have won so many matches. With minor modifications and refinements it went on to become the W.S. Model of 1902 and eventually the MK VI, which served the British Army until 1963. This revolver is sure to catch the eye of a Webley collector, and to collectors of British service weapons as used from the Boer War of 1899-1902 through the World Wars, Korean War and the Irish Troubles.