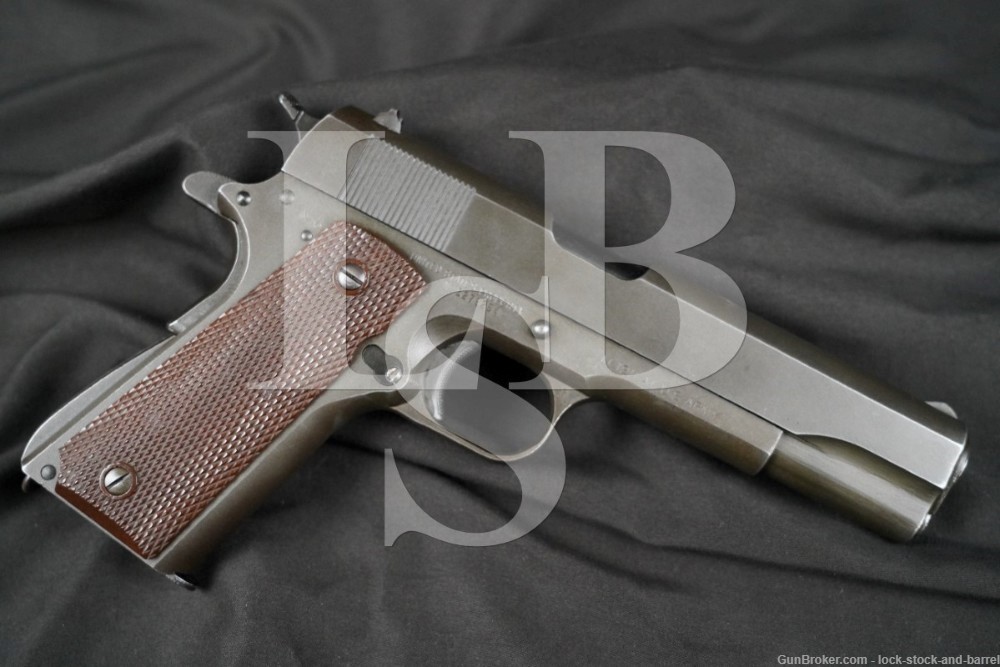 Markings: The left side of the slide is marked “ITHACA GUN CO., INC. / ITHACA, N.Y.”. The left of the frame behind the magazine release and the top of the slide in front of the rear sight are marked with a “P” acceptance proof. The left side of the frame above the magazine release is marked “FJA” (Frank J. Atwood Lt. Col., Sub-Inspector for Ithaca, Remington Rand and Union Switch). The right side of the frame is marked “UNITED STATES PROPERTY / No 1276254”, “M1911 A1 U.S. ARMY”, and at the rear there is an Ordnance mark. The left link-lug of the barrel is marked “P”, the right “HS” (High Standard, used on most Ithaca mid-1943 to end of production). The right front bow of the trigger guard is marked “7”. The left front bow of the trigger guard is marked with an Ithaca proof mark. There is a partial flaming bomb mark on the inside of the dust cover at the rear, there is another flaming bomb under the firing pin plate on the rear of the slide.

Overall Condition: This pistol retains about 95% of its metal finish. The finish is thinning at most edges. There are some spots of light finish wear on the top-left of the slide above the flat. There are two small punch-marks on the right slide flat above the front of the dust cover, likely hardness test-punches. The grip areas show some minor discoloration and light wear, with a spot of more notable finish wear on the frontstrap where there is an odd lump. There is nothing corresponding with this lump on the interior of the magazine well at this location, so it appears to be from improper machining, polishing or from the forging. The action shows light operational wear. The screw heads are sharp. The markings are generally clear, but the Ordnance wheel is incomplete (as is common). Overall, this pistol is in about Fine condition.

Box, Paperwork & Accessories: Included is a single 7-round blued magazine, marked “R” on the top of the floorplate. The magazine has minor operational wear, infrequent minor surface oxidation, intact feed lips and a strong spring.

Our Assessment: The 1911 and 1911-A1 pistols served the military of the United States from 1911 to 1985, through two World Wars and the Korean and Vietnam wars. They gained a reputation as a reliable handgun with plenty of stopping power, and are held in high regard by those who have used them. As was the case in the First World War, the demands of the U.S. Military in the Second would require expansion of production of arms beyond the ability of individual companies and factories besides Colt’s were selected to produce 1911A1 pistols during the war.

Prior to the United States entering the war, the Singer Sewing Machine company was tasked with an “Educational Order”, creating detailed instructions on how a factory could produce 1911-A1 pistols. This plan included the required tools, measurements, finishing processes, everything soup to nuts. With America’s entry into the war, this production study was provided to the Remington Rand typewriter company, Union Switch & Signal, and to Ithaca Gun Company. While Union Switch & Signal would soon move on to manufacturing other military devices, Remington Rand and Ithaca would build hundreds of thousands of pistols along with Colt until the end of the war.

This example was made by Ithaca in 1943. It is in about Fine condition, retaining the great majority of its original parkerized finish, a great bore, and strong mechanics. It is something of an interesting piece as there is a lump in the frontstrap, but by all appearances this is how it left the Ithaca factory. Without any corresponding depression inside the magazine well, this is the result of additional material which was either left when the frame was machined and polished, or was the result of a forging which had extra material at this location. The employees of Ithaca can hardly be blamed for missing something like this, there was a war on! Any M1911A1 in this condition would be worth adding to a collection, but this distinctive example will certainly make a nice conversation piece among those who study WWII production pistols. Please see our photos and good luck!