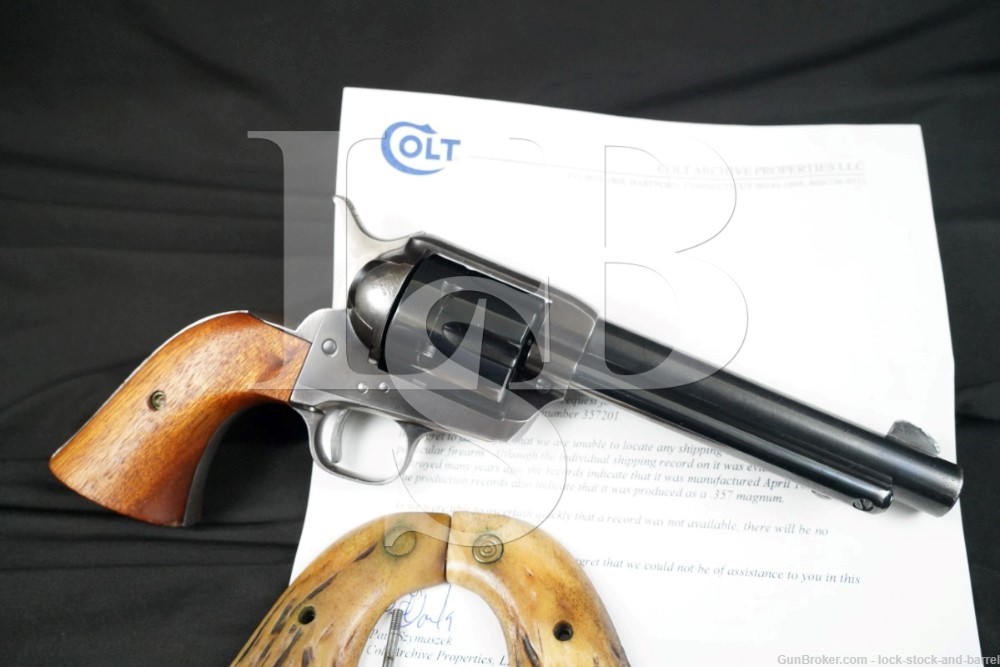 Stock Configuration & Condition: The installed grips are two-piece smooth wood panels. The right panel has a small chip loss at the bottom edge toward the front. Otherwise, there are only light handling marks. There are no cracks. Overall, the grips are in Very Good-Fine condition as not original to the gun.

Also included is a set of stag panels with brass medallions at their tops. The stag grips show light handling wear and discoloration with some verdigris around the medallions. There are some depressions on the left panel above the grip screw, it is unclear if this is damage or part of the natural contour of the material. There are no chips or cracks. Overall, the stag grips are in Very Good condition as not original to the gun.

Type of Finish: Blued & Case Hardened Hammer (the top and front face have been polished bright)

Finish Originality: The included letter does not specify finish, most finish appears original to the parts. The frame’s blue finish is not standard, though it has good raised edges on its markings. It is possible that the frame was simply blued over its original case color. The non-matching number on the cylinder indicates that it is not original to the gun.

Bore Condition: The bore is mostly bright with sharp rifling. There is light erosion at the muzzle-end.

Overall Condition: This revolver retains about 75% of its current metal finish. The finish is thinning at all edges. Most of the balance is handling wear in the grip areas, with much of the grip straps worn to white. The hammer has been polished bright on the top and front face with good case color visible in the rear and muted color on the sides. The loading gate has finish wear and a cluster of nicks and scratches. There is finish wear along the left of the barrel and along the topstrap. There are concentrations of nicks and scratches on the muzzle and butt with some other scattered light marks. The cylinder has a thin turn-line. There are very light tool marks on the head of the cylinder pin and some marks on the bottom of the barrel above the pin. The screw heads range from sharp to tool marked with strong slots and there are tool marks around most screw heads. The markings are clear. Overall, this revolver is in about Very Good condition as partially refinished and not parts-original.

Mechanics: The action functions correctly. Lockup produces very little play on all six chambers. The trigger is crisp. The cylinder has a removable bushing. We did not fire this revolver. As with all used firearms, a thorough cleaning may be necessary to meet your maintenance standards.

Box, Paperwork & Accessories: This revolver comes with the additional grips as described and a letter from Colt Archives. The letter is not a typical shipping record letter, it notes that Colt Archives was not able to locate any shipping information for this revolver. The letter does state “the records indicate that it was manufactured April 10, 1940. The production records also indicate that it was produced as a .357 magnum.”.

Our Assessment: Colt’s Single Action Army is, perhaps more than any other, an iconic American pistol. It was the U.S. issue sidearm for the last two decades of the 19th century, used by pioneers, outlaws and lawmen across the expanding nation, and captivated audiences on the silver screen and television (and still does, today). Produced for nearly a century and a half, they are still being made, today! The 1st Generation Single Action Army was produced from 1873 to 1941, though sales did fall off toward the end of the 1st Generation. While more than 344,000 of the revolvers were made from 1873 to 1922, in the last 18 years of production there were only about 13,000 made. This is one of the very last of the 1st Generation, made in April of 1940 and with a serial number in the last 1,000 made before the United States entered WWII. It was produced as a .357 Magnum, though we suspect that its current cylinder is a replacement. The revolver has honest wear for a gun which was actually used for its intended purpose, ironically somewhat scarce in the late 1st Generation as most were purchased for gifts or display and not for actual use. It is in Very Good condition, retaining a fairly nice bore, strong mechanics and much of its finish. Any 1st Generation SAA would make a great addition to a Colt collection, and this very late example should be no exception. Please see our photos and good luck!