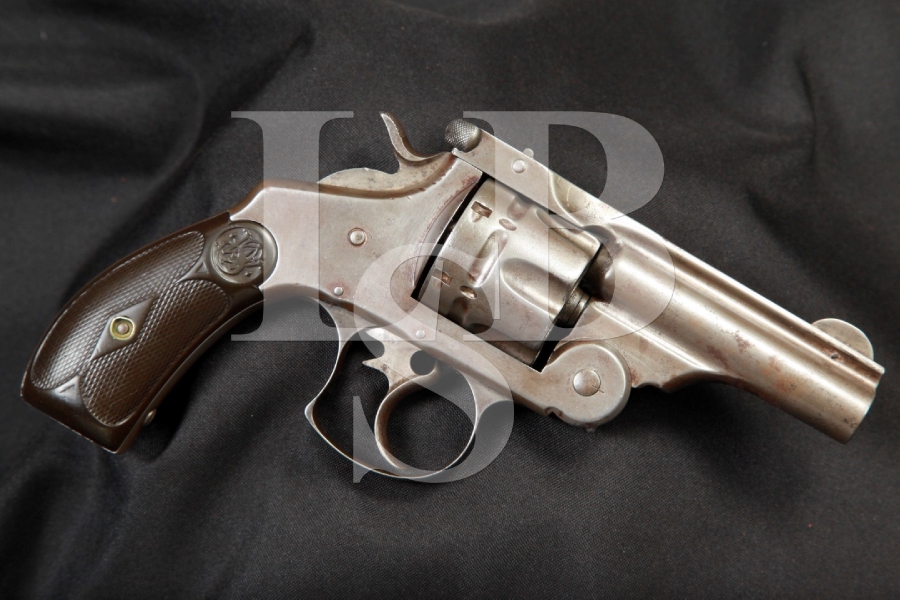 Year of Manufacture: circa 1880s

Sights / Optics: The front sight is a pinned half round blade. The rear sight is a “V” notch with a smaller “U” notch at the bottom, located on the barrel latch.

Stock Configuration & Condition: The grips are checkered hard black rubber that have turned brown with age. There is an S&W in a circle at the top of each grip panel and a diamond around the escutcheon. The left grip panel shows handling and compression marks along with worn checkering. The right grip panel shows fewer handling and compression marks. The checkering is not as worn as the other side, but it does have a misshapen brass grip screw escutcheon. There are no chips, cracks or scratches on either grip panel. The grips rate in about Very Good Plus overall condition as antiques.

Bore Condition: The bore is gray and the rifling is clearly visible. There is scattered erosion throughout the bore, but none of the pitting often seen in black powder arms.

Overall Condition: This handgun retains about None of its metal finish. There appears to be traces of nickel surrounding the barrel latch screw and at the barrel assembly hinge. There are traces of what may be bluing visible on the underside of the barrel and on the left side adjacent to the forcing cone. The revolver was aggressively cleaned at some point, but quite a while ago. Although there is some shallow pinprick erosion, especially under the barrel, the lack of general erosion we believe suggests the revolver was protected by nickel plating originally. Perhaps it was stripped and blued years ago when the barrel was shortened, with that finish having worn or been cleaned off. The screw heads all show use. The hammer checkering is unmarred while the right side of the barrel latch checkering shows some flattening. The markings are clear but incomplete due to the barrel being shortened. Overall, this handgun rates in about Very Good condition as an antique.

Mechanics: The single and double actions function correctly. There is just the slightest play in the cylinder lock up and barrel latch, with no play at the barrel hinge. We did not fire this handgun.

Our Assessment: This is a Smith & Wesson .44 Double Action First Model chambered in .44 S&W Russian. It has been aggressively cleaned until there are more marks from cleaning than finish left. It has had the barrel bobbed to 3 ¼” with the front sight reinstalled. Cosmetically the revolver probably rates as Good Plus, maybe Very Good for an antique. Mechanically it easily rates Fine, regardless of its age or status as antique. If you participate in NCOWS matches, this would be a great revolver, shooting black powder .44 Russian loads. If you collect Old West pocket revolvers, this was apparently customized just for that purpose.