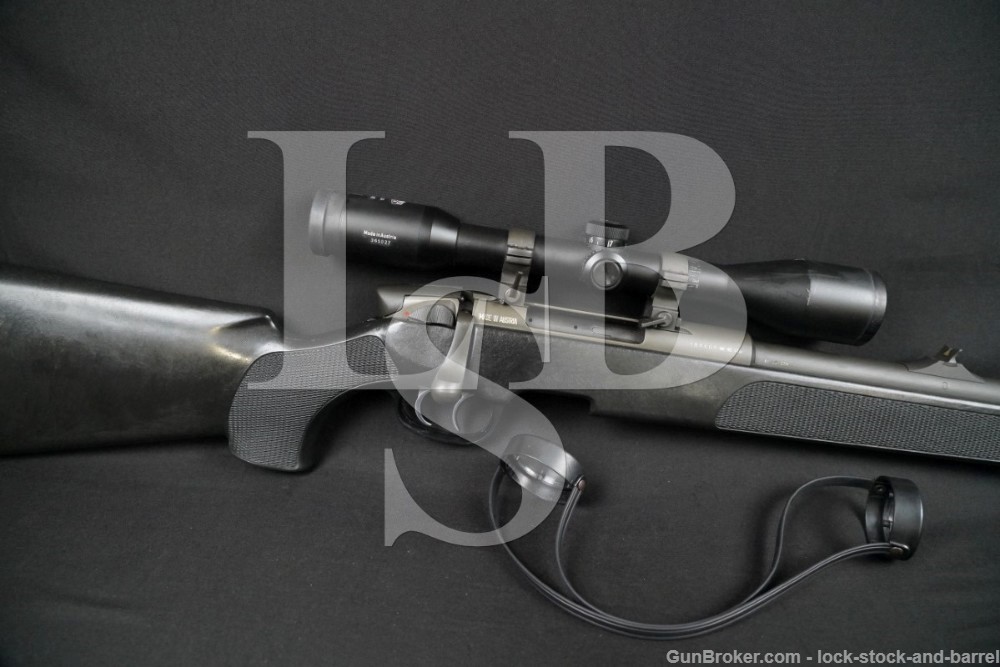 Sights / Optics: The front sight is a blade in a hooded, serrated, ramped base fixed to the front of the barrel. The rear sight is a square notch at the bottom of a wide “V” with a white triangle aiming reference dovetailed and screw-set to a base fixed to the rear of the barrel. The top of the receiver is slotted with 1″ rings holding a Kahles ZF 84 10×42 scope with #103 reticle. The scope body has some light wear and a few scratches, the glass is still clear, in about Very Good condition.

Stock Configuration & Condition: The stock is checkered black synthetic with a pistol grip, a sling bar on the left of the buttstock with a swivel on the front of the forend, and a solid black rubber Steyr buttpad with four installed 1cm spacers. There are a few scattered little marks and scuffs. The checkering is well defined. There are no chips or cracks. The LOP measures approximately 14 1/2? and 13 5/8″ from the fronts of the triggers to the back of the buttpad. The pad has no notable wear or damage. Overall, the stock is in about Fine condition.

Overall Condition: This rifle retains about 97% of its metal finish. The barrel has a few scattered minor nicks and scratches. The bolt shows light operational wear and the knob has minor handling wear. The screw heads are sharp. The markings are clear. Overall, this rifle rates in Fine-Excellent condition.

Mechanics: The action functions correctly. The safety locks the bolt and disengages the trigger. There is a cocking indicator in the rear of the bolt sleeve. The trigger has a smooth, very light takeup followed by a crisp break when not set. When set, the trigger has a very light, smooth first stage and breaks with a barely perceptible second stage. We did not fire this rifle. As with all used firearms, a thorough cleaning may be necessary to meet your maintenance standards.

Our Assessment: The Steyr SSG 69 was developed as a purpose-built sniper rifle for the Austrian armed forces, one of if not the first such factory produced sniper rifles. It featured a hammer-forged barrel which had a long engagement with the receiver, locking lugs on the rear of the bolt with a short, 60 degree throw, detachable rotary box magazine with a transparent rear face allowing the user to visually check how many rounds remained (though no magazine is included with this rifle), and featured a synthetic stock and some synthetic parts for weight reduction. As the model designation indicates, the rifle was adopted by Austria in 1969 and continued in production through 2015 with a few different variants. The original has a fairly light profile hammer-forged barrel with iron sights but also has provision for mounting optics. This one has been equipped with a Kahles ZF 84 10x scope and shows signs of light, responsible use. This model is no longer in production and would be a great opportunity for anyone who always wanted an SSG 69 but hasn’t managed to get their hands on one. Please see our photos and good luck!