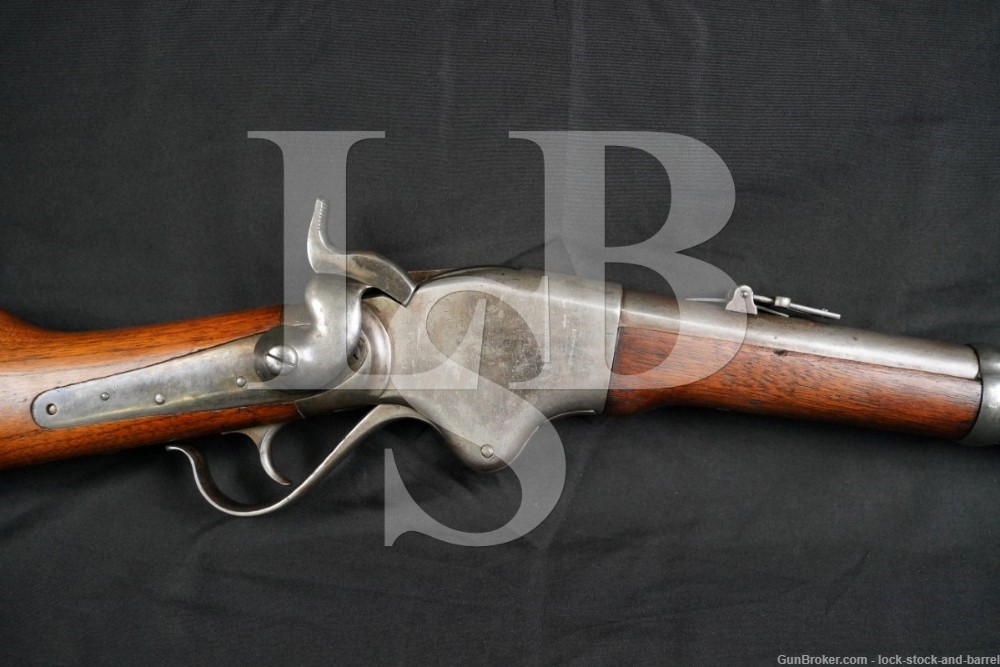 Sights/ Optics: The front sight is a blade fixed to a base by the muzzle. The rear sight is a ladder sight which presents a “V”-notch in the down position. When raised the ladder presents an integral “V’-notch at the top and a “V”-notch slider. The ladder is marked 2-8, inclusive.

Stock Configuration & Condition/ Grip: The stocks are two-piece wood featuring a forend secured by a screw, a barrel band, a straight wrist, a straight comb and a metal butt-plate with a slot for the tubular magazine. There is a sling-bar on the left side of the wrist with a fixed saddle ring. There is a sling-swivel fixed to the belly. The stocks have light-moderate handling marks, compressions, nicks and scuffs. Notably, there is a crack at the top of the wrist which originates from the receiver, there is a small and long crack which both  originate from the tip of sling bar assembly and extend onto the butt, there is a light crack which originates on the right side of the bottom tang and extends onto the wrist and there is some light wear at the toe. The LOP is 13” from the trigger to the rear end of the butt-plate. Overall, the stocks are in Good condition for Antiques.

Finish Originality: The carbine appears to have been refinished at some point.

Overall Condition: The carbine retains about 15% of its metal finish. The remaining blue finish is concentrated on the barrel, concealed under the forend. There is some trace case coloring on the receiver and lock-plate. The metal parts of the carbine are coated in light surface oxidation. There are scattered light handling marks, nicks and scuffs. The marking at the top of the receiver is faded but the rest remain clear. The screw-heads have tool-marks but they remain serviceable. Overall, the carbine is in Good condition for an Antique.

Mechanics: The action functions correctly. We have not fired this carbine. As with all previously owned firearms, a thorough cleaning may be necessary to meet your maintenance standards.

This Spencer Carbine is serial number 61802 and was manufactured between 1863-1865. It appears to have been refinished at some point, but most of the finish has worn off. The upper portion of the falling block appears to have been replaced and the rifle has been altered so that it can fire centerfire rather than rimfire cartridges. The serialization and characteristics (ie. barrel length) rules out this carbine having been a Model 1865 variant of the Spencer Carbine. There are no visible cartouches on the stocks, it is unclear if they wore off or this was a privately acquired specimen. This gun remains a beautifully preserved Civil War weapon system with a nearly immaculate bore which is mechanically sound. This is one collectible you do not want to miss out on!