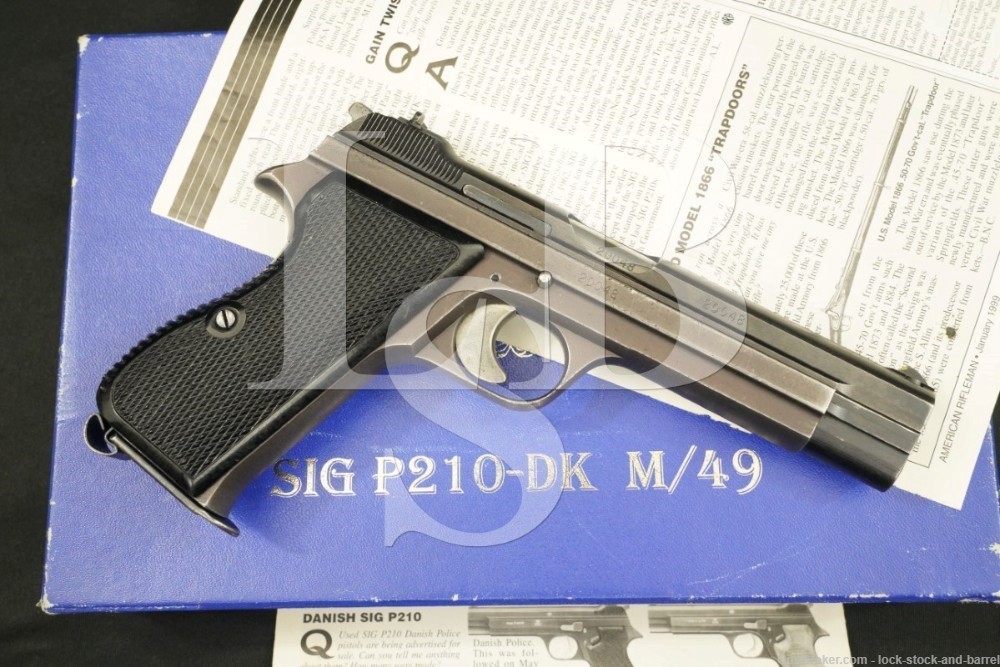 Stock Configuration & Condition: The two-piece grips are checkered black plastic with grooves on the backstraps. The grips show light crazing on the smooth portions with a light scratch or two. The checkering is mostly sharp with a few damaged peaks, notably on the right side. There are no chips or cracks. Overall, the grips rate in about Fine condition.

Bore Condition: The bore is bright and the rifling is sharp and deep. There is no erosion but there is some light fouling in the grooves.

Overall Condition: This handgun retains about 85% of its metal finish. There is light thinning at the leading edges. The frame shows a pleasant plum hue. There is some faint erosion on the front strap and some freckles of oxidation on the left side of the frame. There are infrequently dispersed light scratches and dings. The screw heads are sharp. The markings are clear. Overall, this handgun rates in about Very Good condition.

Mechanics: The action functions correctly. The slide-to-frame fit is snug. The trigger is crisp. We did not fire this pistol. As with all used firearms, a thorough cleaning may be necessary to meet your maintenance standards.

Box, Paperwork & Accessories: Included is an 8-round magazine, a Q&A article from the January 1999 issue of American Rifleman, and an original serial matching box. The magazine has some light thinning to the body from use and some finish loss and little scuffs to the baseplate, in about Fine condition. The box shows minor edge thinning with some light minor finish loss on the sides. The box rates in about Fine overall condition.

Our Assessment: The P210 pistol was originally manufactured in 1947 and became the standard military pistol of the Swiss Army in 1949, thus the Military designation P49. It was manufactured continuously for over 55 years. The pistols were decommissioned and replaced by the SIG P220 (Swiss Army designation Pistole 75) but P210s are greatly valued by shooting sports competitors. This example is a SIG M/49, usually called only Neuhausen in Denmark, is the Danish military issued version for officers, military police, and special forces, chambered in 9 mm Luger, and is a specially marked version of the P210-1 or P210-2. This was the standard sidearm in the Danish military for nearly 60 years. This one has been kept in very nice condition by its previous owner and comes with one magazine and a serial matching box! These guns are regarded by collectors as one of, if not, the best-constructed handgun ever, and the originals are always increasing in value. It should be a great investment and a wonderful addition to your collection. Please see our photos and good luck!