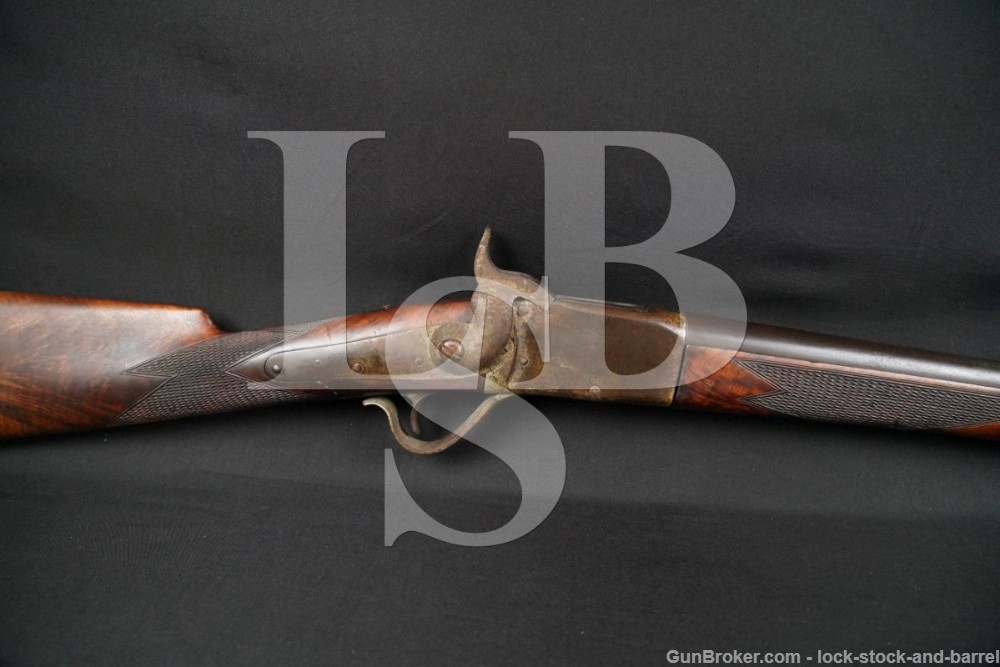 Caliber: The bore is approximately .45 Caliber, but the chamber will need to be cast to determine exact chambering. We have tested and confirmed that this rifle is not chambered for .40-70, .45-60 or .43 Spanish

Sights / Optics: The front sight is a blade dovetailed to the front of the barrel. The top-rear of the barrel is drilled and tapped with mounting screws and there is another screw in the top of the wrist, presumably for mounting a tang sight (none present).

Stock Configuration & Condition: The stocks are two-piece checkered select walnut with wedge-secured forend, pewter nosecap, straight grip, straight comb and nickel-plated steel crescent buttplate. The stocks have a few scattered nicks, scuffs and scratches. There is a break in the wrist toward the rear of the lockplate and the forend has a notable gap to the receiver. The LOP measures 13 1/4″ from the front of the trigger to the back of the buttplate. The remaining nickel on the buttplate has discolored and most surfaces have light-moderate surface oxidation and erosion. Overall, the stocks are in Fair-Good condition as not original to the gun.

Finish Originality: There are no distinct signs of refinishing, but we suspect this is a custom rifle and that the receiver was nickeled when the barrel was installed.

Bore Condition: The bore is gray with strong rifling. There is scattered light-moderate erosion and some light pitting in the bore.

Overall Condition: This rifle retains about 15% of its metal finish. The balance is in remaining nickel finish on the receiver. The barrel has gone to a moderate-dark patina with scattered minor surface erosion. The receiver has scattered finish loss, discolored with oxidation. There are some light nicks, scuffs and scratches. The action shows operational wear. The screw heads range form sharp to tool marked with strong slots. The markings are worn, but legible. Overall, this rifle is in Good-plus condition as Antique.

Box, Paperwork & Accessories: None. Please note, there is a ferrule and provision in the forend for a clearing rod, but none is present.

Our Assessment: Patented by Henry Peabody in 1862, the Peabody rifle would see development during the Civil War and was submitted to U.S. trials in 1864, but the war ended before the rifle could see standard military adoption. The Peabody rifles did see foreign contract sales with many chambered for .43 Spanish, sold to Spain, Mexico and France. They also saw adoption by some American militias, including Massachusetts and Connecticut. This example appears to be a custom rifle built on a Peabody action, though it is possible that it was a commercially sold gun. It has a 28″ barrel with a .45 caliber bore, though the chamber will need to be cast to confirm exactly which cartridge the barrel is chambered for. It has a nice set of stocks, though there is a break through the wrist and a gap at the rear of the forend, but the grain is beautiful and the checkering is still strong. This will make a great addition to a collection of early American cartridge rifles, and would even fit with a Martini collection due to the similarity of the design. Please see our photos and good luck!