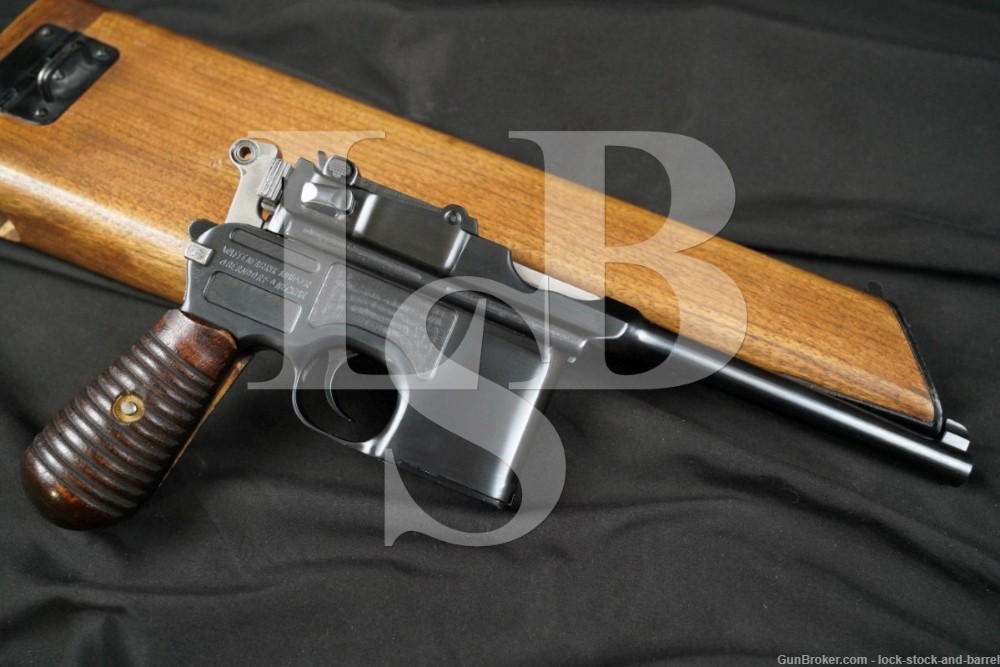 Make: Mauser, the markings are consistent with pistols refurbished by Federal Ordnance (Fed Ord), though it is not specifically marked with their company name.

Stock Configuration & Condition: The grips are two-piece grooved wood panels. The grips show minor handling wear with a few scattered light marks. The wood is generally proud to the metal. There are no chips or cracks. Overall, the grips are in Fine-Excellent condition as not original to the gun.

Type of Finish: Blued & Some Parts In The White

Overall Condition: This pistol retains about 97% of its current metal finish. The new finish is generally strong throughout. There is some scattered light erosion under the finish, most notable on the bolt-face and on the barrel extension’s rails in the relief cuts. There are a few scattered light marks, most notable is a nick on the bottom of the barrel toward the rear. The action shows light operational wear. The screw head is lightly tool marked with a strong slot. The markings are clear, some markings have been re-struck or are not original to the gun. Overall, this pistol is in Fair-Good condition as refinished (see Mechanics).

Mechanics: The recoil spring feels a little weak, especially when the bolt is most of the way forward. The bolt stop does not appear to be sitting in its correct position on the right of the barrel extension under the rear sight. During our function check, the trigger did not consistently trip the sear. This appears to be due to the weak recoil spring as the trigger did properly drop the hammer when the barrel was pulled firmly forward. The trigger is crisp. We did not fire this pistol. As with all used firearms, a thorough cleaning may be necessary to meet your maintenance standards

Box, Paperwork & Accessories: This pistol comes with a wood stock/holster. The holster is a reproduction, the bracket is marked “501154”, appearing to have been refurbished or a reproduction. The stock/holster has light wear on its belt loop and bracket, but otherwise has only handling marks.

Our Assessment: The Broomhandle Model 1896 Mauser is certainly an interesting looking firearm. Its features are the most distinctive of any other pistol. In addition to being popularized in Soviet films as the iconic weapon of the Russian revolution and civil war, it was even used as a basis for futuristic weapons like the blaster used by Han Solo in Star Wars. This pistol was originally made between 1923 and 1930. It has since been refurbished, likely by Federal Ordnance based on the caliber marking on the left of the barrel. The result looks gorgeous, though there are some mechanical quirks that should be addressed before the pistol will be ready to fire. It comes with a nice reproduction stock/holster which looks equally handsome and functions properly. This will make a great addition to a Mauser or early autoloading handgun collection, but with its unique and iconic appearance would add to any collection. Please see our photos and good luck!