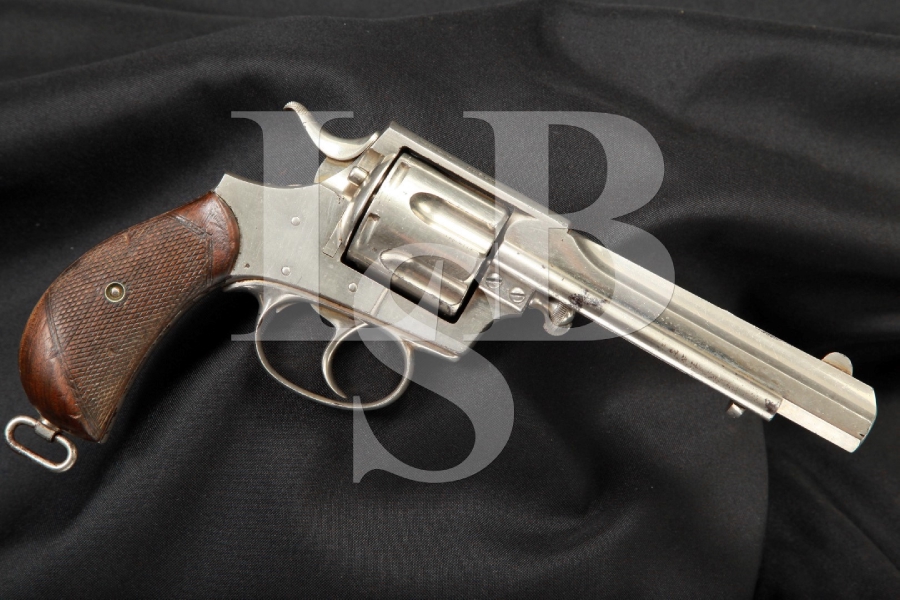 Sights / Optics: The front sight is a rounded blade fixed to the top rib. The rear sight is a “V” notch milled into the rear of the top strap.

Stock Configuration & Condition: The two piece hard wood checkered bird’s head grips show multiple marks in the finish and wood. The checkering is very shallow and the points are flat. Two notable compression marks are present on the right panel as well as on the left. Surface thinning is present near the butt of both panels and a small mar in the checkering is evident on the left panel. The grips were probably refinished long ago. The grips rate in about Good overall condition.

Bore Condition: The bore is bright and the rifling is sharp. There is very faint erosion in the first inch of the bore near the muzzle.

Overall Condition: This handgun retains about 70% of its current metal finish. The finish has thinned and dulled. A patch of surface erosion is visible on the top of the barrel and two patches as well as scattered small spots of erosion appear on the ejector rod housing. Finish thinning is present at the muzzle and multiple small shallow marks appear on the barrel. The edges of the barrel are sharp. Marks from the cylinder pin head and a cluster of small compression marks are visible on the underside of the barrel. A compression mark is present on the front top edge of the frame and a tool mark in which erosion has formed is evident at the sear screw head. A patch of erosion is evident on the left forward side of the frame, the front surface, and on the right side of the frame near the grip. Patches of surface loss and erosion are visible on the edges of the grip frame and along the junction of the grip and frame. Shallow drag marks are evident on the cylinder which also exhibits finish thinning on the leading edges, handling marks and small patches of erosion. A lanyard swivel loop is present on the butt. The screw heads are sharp except the two screws which attach the ejector rod housing to the frame show moderate deformation but should be serviceable. The grip screw head is deformed and the screw is difficult to turn. The markings are shallow but clear. Overall, this handgun rates in about Very Good condition as antique.

Mechanics: The action functions correctly and the cylinder lock up is tight. We did not fire this handgun.

Our Assessment: There is very little information available about Trulock & Harriss. The best information we have that the origins of the company can be traced back to Thomas Truelock (1720 -1798), Gunmaker and Sherriff to Lord Mayor of Dublin, Henry Hart (1774/5), and was passed down through the family until Joseph Harriss married into the family and joined the family business in the mid 1850s, forming “Trulock & Harriss”. The company name was changed to Trulock, Harriss & Richardson in 1898. We also found a photograph of a Webley & Scott R.I.C. No. 1 stamped with the Trulock & Harris name and the Dawson Street address, indicating that Trulock & Harris were retailers as well as manufacturers. This revolver is a very nice Webley #5 New Model Army Express. Webley had a very cooperative policy about private label markings and would apply the store brand markings at the factory. This is a very unusual pistol, very similar in design and function to a Colt Single Action Army, the octagonal barrel with a full length top rib gives this pistol a unique appearance. It is chambered for .455 Webley which is a shortened version of the .45 Colt. A full length .45 Colt round will not chamber in the cylinder. This pistol was designed for black powder only and must never be fired with smokeless rounds. The pistol is in Very Good condition as antique and functions correctly. If you are a collector of antique firearms, it is a pretty safe bet that you do not have a Trulock and Harris marked Webely No.5 New Model Army Express revolver.