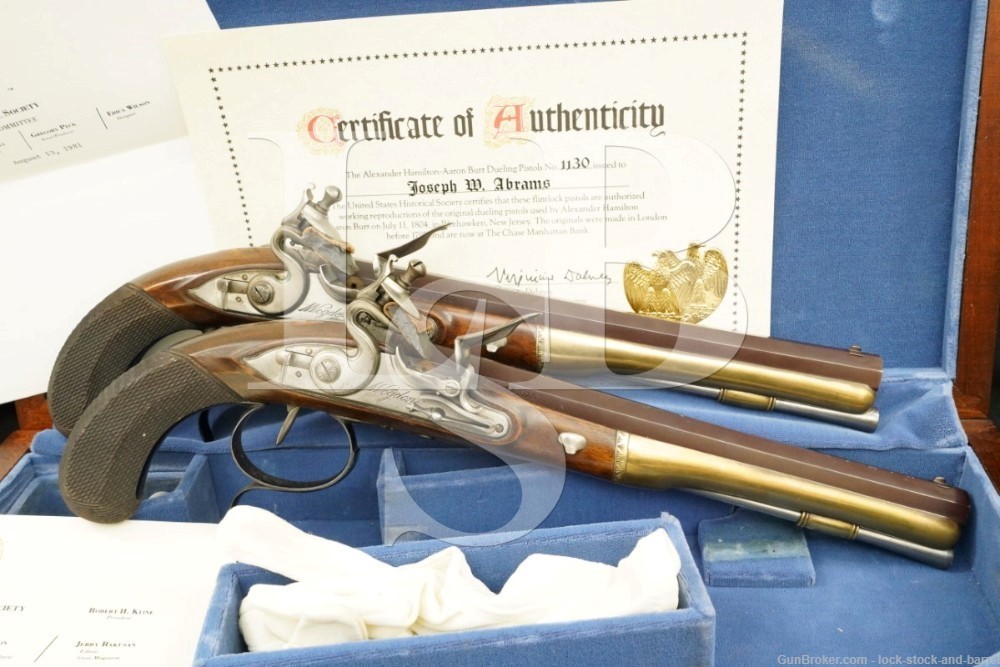 Make: Uberti for the US Historical Society

Barrel Length: Approximately 9.5”, Octagonal
Sights/ Optics: The pistols have identical sights. The front sight is a brass blade dovetailed to the muzzle end of the barrel.The rear sight is a square notch fixed to the top-tang.

Stock Configuration & Condition/ Grip: The stocks are identical on the two pistols.  The stock is two-pieces featuring a solid brass forend with a ferrule and slot for the included ramrod, a lock-plate and checkered wood pistol grip.

The stock on 1130A has some light patches of tarnish on the brass forend, a nick on the bottom of the wooden half of the forend and a nick under the lock-plate. There are some additional light handling marks. The checkering remains sharp. There are no chips or cracks. Overall, the stock is in Very Good-Fine condition.

The stock of 1130B has some light handling marks and some light spots of tarnish on the brass forend. The checkering remains sharp. There are no chips or cracks. Overall, the stock is in Fine condition.

Bore Condition:
1130A: The bore is mostly bright with a small patch of stubborn fouling on the left side of the bore.

1130B: The bore is mostly bright with some stubborn fouling in the bore.

Overall Condition:
1130A: The pistol retains about 85% of its metal finish. There are some scuffs, nicks and handling marks on the pistol’s metal surfaces. Notably, the top and left sides of the barrel have some scattered spots of finish loss and there are some light spots of tarnish on the lock-plate. The markings remain clear. The screwheads are serviceable. Overall, the pistol is in Very Good condition.

1130B: The pistol retains about 90% of its metal finish. The pistol has some light handling marks, nicks and scuffs. Notably, there are some spots of finish loss concentrated at the rear end of the barrel and the lock-plate has some light spots of tarnish. The markings remain clear. The screwheads are serviceable. Overall, the pistol is in Very Good condition.

Mechanics: The action functions correctly on each pistol. There is a set-trigger mechanism in each pistol which is activated by pushing the trigger forward slightly, with the pistol cocked. There will be a slight click when it is set. We did not fire either pistol. As with all previously owned firearms, a thorough cleaning may be necessary to meet your maintenance standards.

Box Paperwork and Accessories: The set of pistols come with their original case, some lead balls, a pair of white gloves, a pamphlet on the pistols, a dated receipt, certificate of authenticity, operating instructions and a letter describing the set from the US Historical Society. The box has some light handling marks but it remains in Very Good condition.

Our Assessment: This US Historical Society Alexander Hamilton-Aaron Burr Dueling Pistol set is a pair of .54 caliber flintlock muzzle-loaded pistols which were manufactured by Uberti. The set pays homage to one of the most consequential duels in American history: when Alexander Hamilton squared off against Aaron Burr. Alexander Hamilton was one of the most famous Founding Fathers of the United States but he was a controversial figure even in his day. Hamilton was an outspoken Federalist who sought a more centralized model for the newly formed United States and he laid the foundations for America’s often dreaded modern financial institutions. The greatest political challenge to Hamilton’s Federalist Party was Thomas Jefferson’s Republican Party which sought a limited role for the Federal Government and a more decentralized society. In the election of 1800 the Federalists were defeated and Thomas Jefferson was elected President with Aaron Burr assuming the Vice Presidency. By 1804, as Jefferson’s first term was nearing its end, Burr ran for Governor of New York to the dismay of Hamilton who personally loathed him. Burr lost the election and was convinced that Hamilton had attacked his honor, thus Burr demanded an apology. After failed attempts at reconciliation a duel was agreed upon by the two men. They met for their fateful duel on July 11th, 1804 and Burr won. According to the US Historical Society Hamilton may have lost because the construction of his pistol was unique and he did not quite understand how to use it. Although Burr had won the duel he won little popularity for killing Hamilton and lived the rest of his life in relative obscurity, his political career had been devastated. Hamilton’s death also resulted in the collapse of the Federalist Party. Both men remain controversial figures even today, but the duel between them was certainly one of the most important events in American history. These pistol’s pay tribute to that fateful meeting in 1804 and can now be yours. They come with paperwork from the American Historical Society describing some of the history around the duel and the pistols. This is a wonderful set of beautifully crafted pistols that you do not want to miss out on!