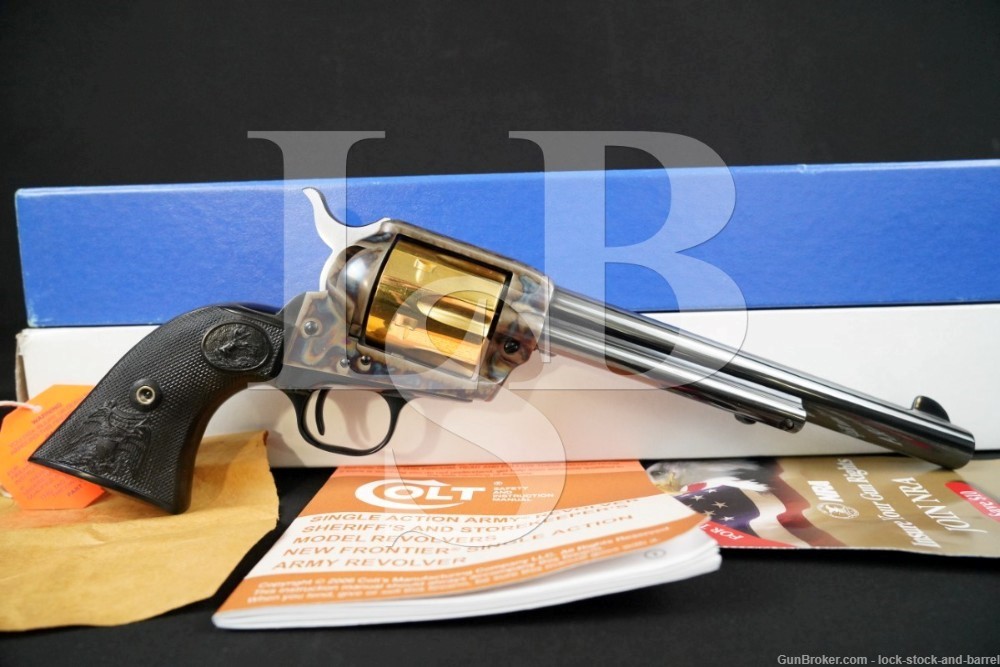 Stock Configuration & Condition: The grips are two-piece checkered black hard rubber with rampant colts in ovals at their tops and American Eagles at their bottoms. The right panel has some smoothed checkering at the front edge under the rampant colt which appears to be from factory fitting. Otherwise, there are only light handling marks. The checkering is generally sharp. There are no chips or cracks. Overall, the grips are in about Excellent condition.

Finish Originality: The blue and case color finish are Original. The cylinder’s markings are crisp, but we were not able to find any other contemporary examples of this model with gold cylinders and we believe that the cylinder has been refinished.

Overall Condition: This revolver retains about 97% of its current metal finish. There is a cluster of light nicks and scratches on the bottom of the barrel forward of the ejector housing and some light nicks on and around the front sight. There are a few other scattered minor marks. The cylinder has a very faint turn-line, not through the finish. The case color is vibrant. The screw heads are sharp. The markings are clear. Overall, this revolver is in Fine-plus condition as partially refinished.

Mechanics: The action functions correctly and smoothly. This revolver’s cylinder has a removable bushing. The lockup produces very little play on all six chambers. The trigger is crisp. We did not fire this revolver. As with all used firearms, a thorough cleaning may be necessary to meet your maintenance standards.

-Two-piece blue cardboard Colt box. There is a tear at one corner of the tray portion which has been repaired with tape on the interior.

Some changes were incorporated in an effort by Colt to keep prices down. One new change was a pressed-in cylinder pin bushing instead of the removable ones used in 1st and 2nd Generation cylinders. Also, the ratchet at the rear of the cylinders was re-shaped, which also necessitated a different shape on the rotating hand. And for some unknown reason, the pitch of the barrel’s threads was changed from the 20 threads per inch (TPI) as used on 1st and 2nd Generation SAAs to 24 TPI for these new ones. Toward the end of 2nd Generation production Colt had begun using some investment cast parts, but the frames continued to be forged. The introductory caliber for 3rd Generation SAAs was .45 Colt, but other chamberings would be added to the catalog in the following years.

Everyone should have a Colt Single Action Army, and this would be a beauty to add to any collection. Manufactured in 2009, this revolver has had the cylinder finished in gold, which gives it a very distinctive appearance. The cylinder has a removable bushing, a feature which was reintroduced in some later 3rd Gen SAA models. Chambered for .38 Special, ammunition for this revolver should be easy to come by and it should be a very comfortable shooter. The revolver is in Fine-plus condition, appearing to have seen little use, though there are some light nicks on the barrel toward the muzzle-end. This revolver is more than suitable for addition to a collection, but it would also make an attractive “BBQ Gun” or could be used in Cowboy Action Shooting competitions. Please see our photos and good luck!