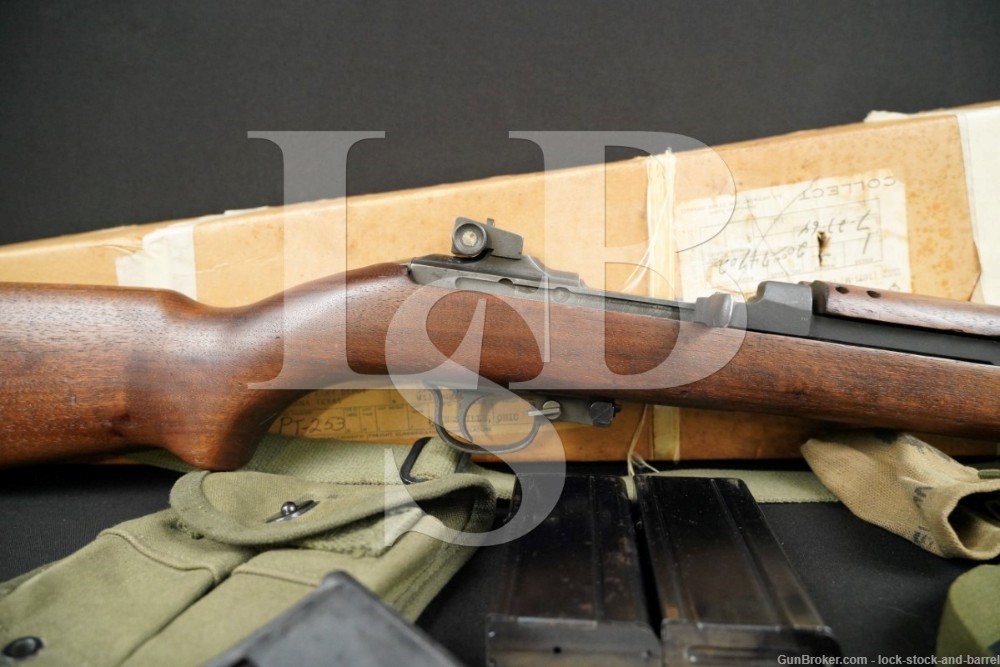 Stock Configuration & Condition: The stock has a pistol grip, Type III barrel band with sling loop & bayonet lug, sling well, sling pass through, and a metal buttplate. The wood shows several scrapes, scratches and compression marks which have been oiled. The LOP measures 13 1/4 inches from the front of the trigger to the back of the buttplate. The stock rates in about Very Good Plus overall condition.

Bore Condition: The muzzle and grooves are semi bright. The rifling is sharp. There is erosion at the muzzle and in the grooves near the muzzle. The bore shows an M.E. of 1.2.

Overall Condition: This rifle retains about 95% of its metal finish. The rear of the barrel and bottom of the receiver have been treated with cold blue. The finish shows scrapes, small scratches and thinning on the leading edges of the metal. The receiver & bolt show light operational wear. The screws show use. The markings are deep. Overall, this rifle rates in about Very Good Plus condition.

Box, Paperwork & Accessories: The rifle comes in its shipping box from the Red River Army Depot and with paperwork from the Red River Army Depot. It also comes with a green canvas sling, canvas muzzle cover, dual mag pouch and two 15 round magazines.
The magazines show scrapes & small scratches. One mag is in Very Good Plus condition. The other mag also shows some surface erosion and is in Very Good condition.
The 15 round magazine is not available to residents of California or any other state with magazine capacity restrictions.
Please see photos as to the condition of the listed items.

This Inland M1 Carbine was made back in 1943. At some point it was rebuilt at the Benicia Arsenal and is marked accordingly on the stock. The rifle was eventually placed into storage and purchased through the Office of the Director of Civilian Marksmanship (DCM). The DCM became the Civilian Marksmanship Program (CMP) in 1996. The rifle comes in its shipping box from the Red River Army Depot and with paperwork from the Red River Army Depot.
This M1 Carbine looks good and has clear markings on the metal & wood. It will add to your WWII collection.  Good luck.