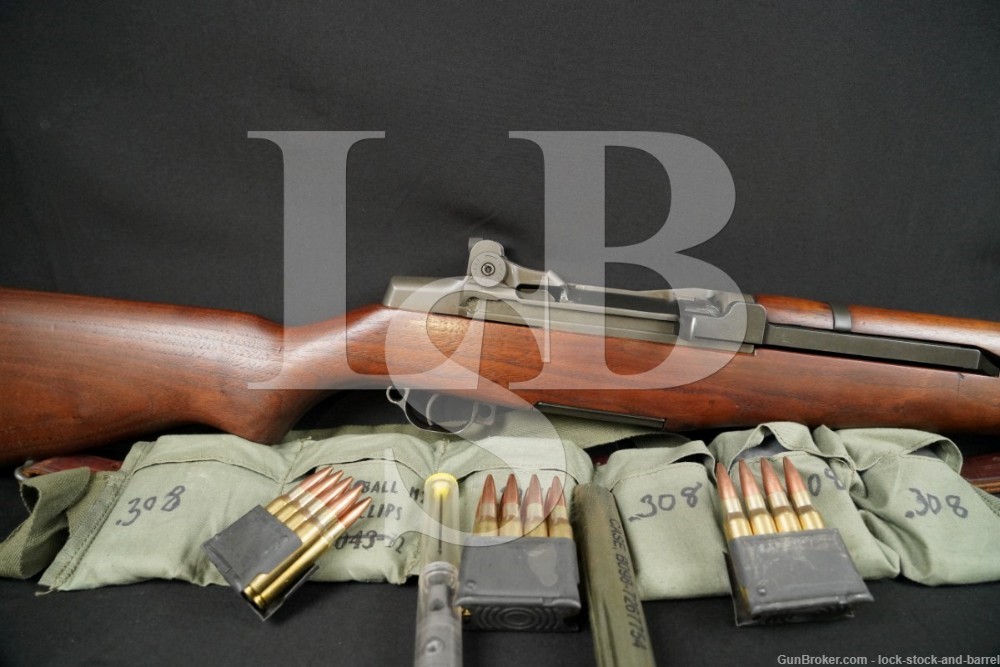 Stock Configuration & Condition: The left side of the stock, above the trigger, is marked “GHD in box” above a “crossed cannons” stamp. These are not original marks. These marks have been added.
The oil stained hardwood stock has a pistol grip, metal nose caps, stacking loop, two sling loops, and a metal buttplate with hinged door for storage in the butt. The refinsihed buttplate has small scratches and surface erosion showing through the new finish. The wood shows scattered scrapes, scratches, and compression marks. The LOP measures 13 1/8 inches from the front of the trigger to the back of the buttplate. The stock rates in about Very Good Plus overall condition.

Bore Condition: The bore is bright and the rifling is deep. There is no erosion.

Overall Condition: This rifle retains about 94% of its metal finish as refinished. The bottom of the receiver shows areas of discoloration from oxidation. The metal shows scrapes, scuffs and handling marks. The gas tube also shows some small scratches. The gas tube and trigger group show discoloration from both oxidation and oil residue. The bolt and receiver show light operational wear. The markings are well defined. Overall, this rifle rates in about Very Good Plus to Fine condition as refinished

Mechanics: The action functions correctly. We did not fire this rifle. As with all used firearms, a thorough cleaning may be necessary to meet your maintenance requirements.
A metal spacer block has been installed to prevent .30-06 clip from being loaded into the rifle.

Box, Paperwork & Accessories: The rifle has a USGI T-37 Flash Suppressor installed and an unmarked leather sling attached.
The rifle comes with a cleaning rod & nylon case, plastic oiler tube, combination tool, bandolier, 9 clips and 72 rounds of .308 ammo.
Please see photos as to the condition of the listed items.

This Springfield Armory M1 Garand was built back in 1942. It has been converted to fire .308 Winchester ammo. A new production .308 barrel, spacer block, National Match op rod and National Match sights have been installed. The spacer block prevents loading .30-06 clips into the rifle. The rifle has been refinished and has a T-37 Flash Suppressor installed. This is a distinctive looking rifle with a strong & bright bore.  It comes with cleaning gear, clips and ammo. It should be a lot of fun at the range. Good luck.