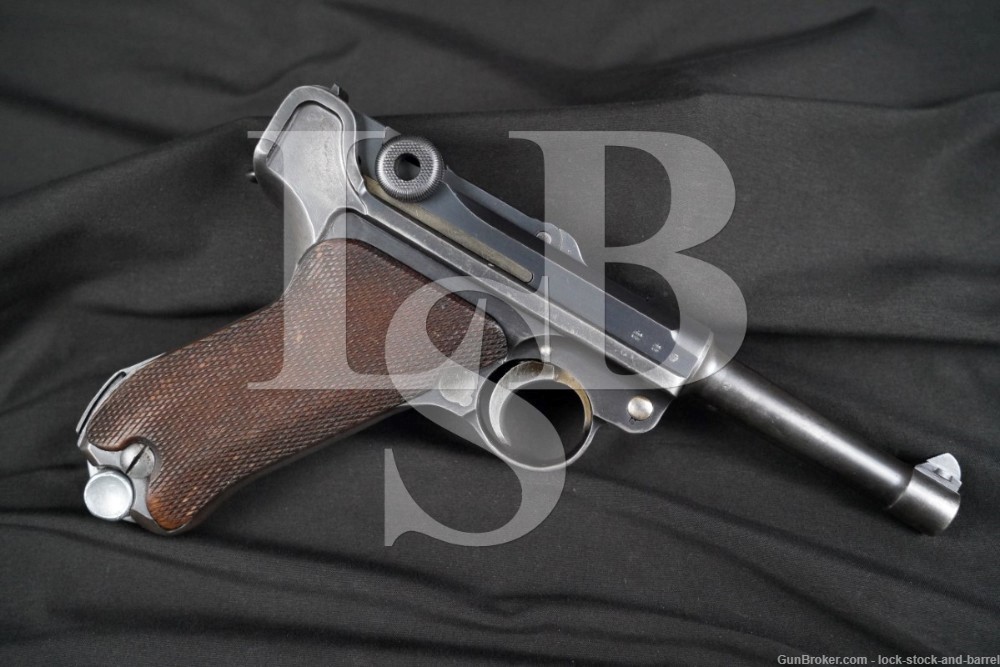 Stock Configuration & Condition/ Grip: The grip panels are two-piece checkered wood. The grip panels have light handling marks, nicks and scuffs. Notably, the panels have some scattered patches of black discoloration. The checkering remains mostly sharp. There are no chips or cracks. Overall, the grips are in Very Good condition.

Bore Condition: The bore is mostly bright with sharp rifling. There is only light erosion concentrated in the grooves.

Overall Condition: The pistol retains about 70% of its metal finish. There are some light-moderate handling marks, nicks and scuffs. Notably, there is finish loss along the leading edges, finish loss around the muzzle and the finish has thinned on the grip straps. There is some light surface oxidation visible where the finish has worn which is concentrated around the bottom of the grip straps. The markings remain clear. The screwheads have light tool-marks but they remain serviceable. Overall, the pistol is in Very Good condition.

Mechanics: The action functions correctly. There is light play between the barrel assembly and frame. We did not fire this pistol. As with all used firearms, a thorough cleaning may be necessary to meet your maintenance requirements.

This particular Luger was manufactured in 1936 three years after the party came to power in Germany. That year Germany began to openly flex its military might and trample over the Treaty of Versailles provisions. In March German soldiers reoccupied the Rhineland which was an outright violation of the Versailles agreement. Although this pistol was made several years into Hitler’s rule, it lacks the Waffenamts with overtly inspired symbols, the fied markings were not introduced until 1939. The pistol’s Waffenamts are consistent with army issued small arms, and almost all of the gun’s parts are serial matched. The only mismatched item is the included magazine. This is an aesthetically pleasing and ergonomic pistol, and while it has some handling wear it remains nicely preserved. If you are a fan of German military arms and WWII history then this is the handgun for you. Good luck on your bid!