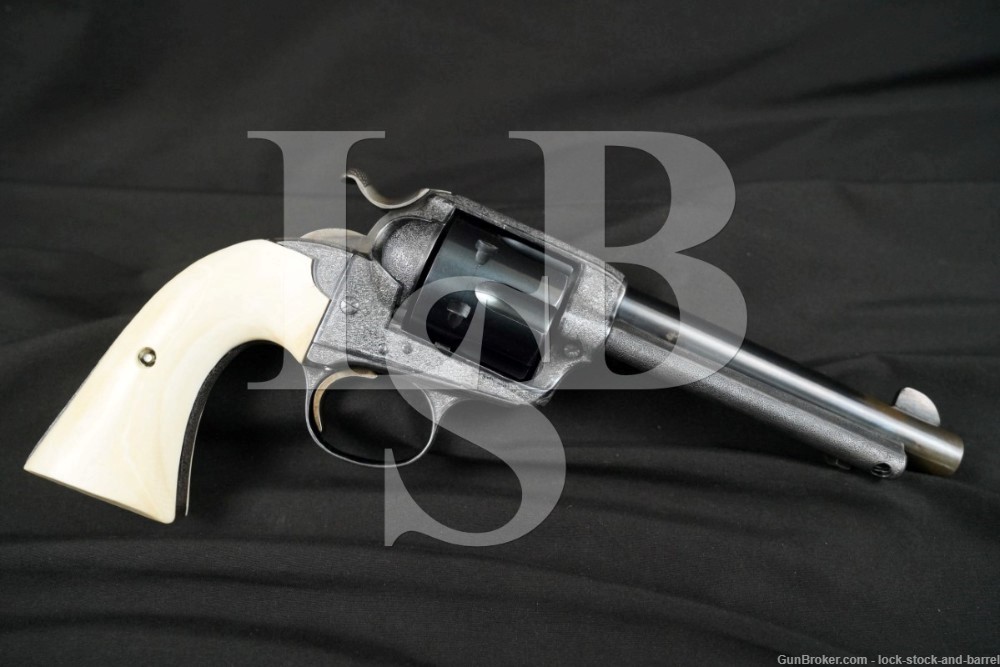 Markings: The top of the barrel is marked “COLT’S PT. F.A. MFG. Co. / HARTFORD CT. U.S.A.” The left side of the barrel is marked “(BISLEY MODEL) / COLT SINGLE ACTION ARMY .44 SPECIAL”. The patent markings and Rampant Colt logo on the left of the frame have been obscured by the frame’s stippling, though there are remnants, and it was a two-line patent date marking. The loading gate is marked with assembly number “907”. The frame is marked “219893”, found again on the trigger guard. The back strap is marked “219 / 893”, this marking is also obscured by stippling, though not as much as the left-side frame markings. The front face of the cylinder is marked “A”. The ejector housing, frame, loading gate and grip frame have extensive stippling.

Sights / Optics: The front sight is a fixed blade. The rear sight has been filed out to a square notch in the top strap.

Stock Configuration & Condition: The grips are two piece smooth bone panels. The grips have some scattered minor nicks and scuffs, but no notable damage. The grips are generally well fit to the frame, slightly shy in some areas. There are no chips or cracks. Overall, the grips are in Fine condition as not original to the gun.

Finish Originality: Refinished, the barrel and cylinder are not original to the gun.

Bore Condition: The bore is mostly bright with sharp rifling. There is no erosion in the bore, but there is some stubborn leading in and just in front of the forcing cone.

Overall Condition: This handgun retains about 92% of its metal finish. The most notable defect in the finish is discoloration around the front sight on the barrel. As the front sight does not appear to be original to the gun, this may have been caused by whatever process (such as soldering) which was used to mount the front sight. There is some discoloration from oxidation in the grip areas’ stippling. The finish is thinning at most edges. The cylinder has a thin turn-line, mostly not through the finish and most notable in the lead-in grooves. The screw heads have decorative engraving, having sharp or lightly tool marked slots. Most markings are clear, some have been obscured by the stippling, as noted in the Markings section. Overall, this revolver is in Very Good-plus condition as refinished.

Mechanics: The action functions correctly. The cylinder locks up with minor play on each chamber. This revolver’s cylinder has a removable bushing. We did not fire this handgun. As with all used firearms, a thorough cleaning may be necessary to meet your maintenance standards.

Our Assessment: The Colt Bisley was introduced in 1894 as a target pistol. The name Bisley came from the famous firing range in Bisley, England. The Colt Bisley can be distinguished by the longer grip, the wider hammer spur, and the wider trigger. Bisleys were serial-numbered in the range of 156300–331916, in the same sequence as the Single Action Army. This example was made in 1901 and has since been extensively customized. The barrel and cylinder have been replaced, the revolver is now chambered for the .44 Special cartridge. The frame, grip frame and ejector housing have been extensively stippled through the new blue finish, giving the revolver an attractive two-tone appearance which is set off by its handsome grips. All of the 1st Generation Single Action Army revolvers are collectible and the Bisley models are no exception. The work done on this one makes it very distinctive and will be sure to catch eyes on display or at the range. Please see our photos and good luck!