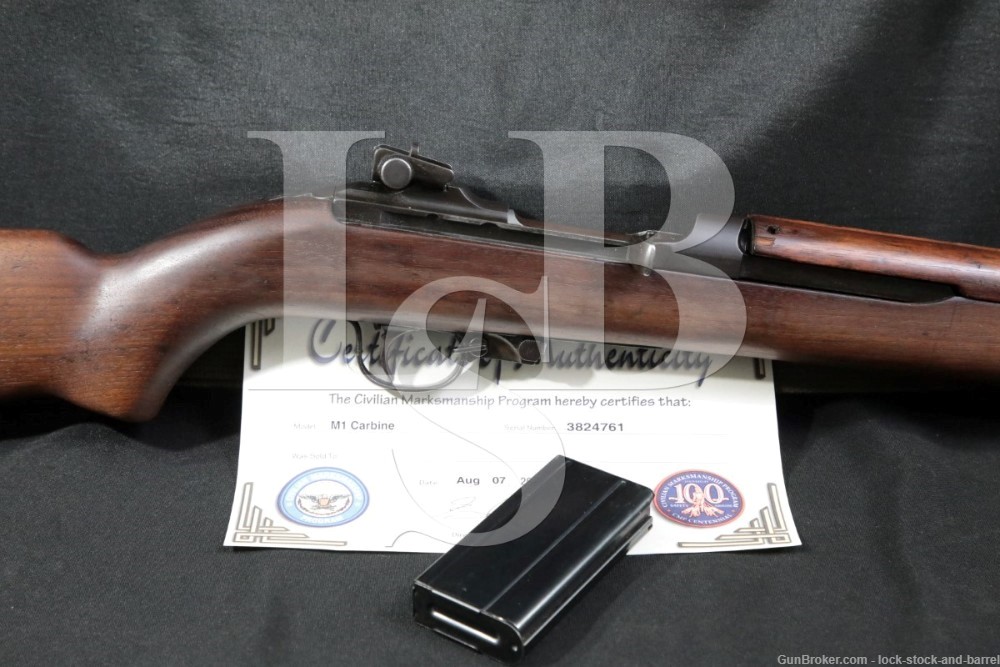 Sights / Optics: The front sight is a post set between two protective wings. The rear sight is a Type III flip up dual aperture assembly.

Stock Configuration & Condition: The hardwood stock has a pistol grip, Type III barrel band with sling loop & bayonet lug, sling well, sling pass through, and a metal buttplate. The handguard and the bottom of the forearm shows scrapes, scratches and compression marks. The remaining wood  scattered scrapes & handling marks.  These marks have been oiled. The LOP measures 13 1/4 inches from the front of the trigger to the back of the buttplate. The stock rates in about Very Good Plus overall condition.

Overall Condition: This rifle retains about 80% of its metal finish. The receiver and trigger group show areas of thinning below the wood. The trigger group also shows surface erosion and pitting. The covered portion of the barrel shows light thinning and patches of oxidation. The exposed metal shows scrapes, scratches and discoloration. The discoloration is from both oxidation and oil residue. The receiver & bolt shows operational wear. Most of the markings are well defined. Overall, this rifle rates in about Very Good condition.

Box, Paperwork & Accessories: The rifle comes with a Certificate of Authenticity from the Civilian Marksmanship Program (CMP), a green canvas sling and a 15 round magazine. The magazine shows several small scrapes & scratches. It is in about Very Good Plus condition.
The 15 round magazine is not available to residents of California or any other state with magazine capacity restrictions.
Please see photos as to the condition of the other items.

This IBM M1 Carbine was made back in 1943. It has been rebuilt using a mix of USGI parts but still retains several IBM parts. The most notable (for collectors) is the “I.B.M. CORP.” marked barrel. The rifle was purchased through the Civilian Marksmanship Program (CMP) and comes with a Certificate of Authenticity. This collectible wartime military rifle should keep you smiling out at the range. It also comes with a magazine and a sling so all you need is some ammo. Good luck.