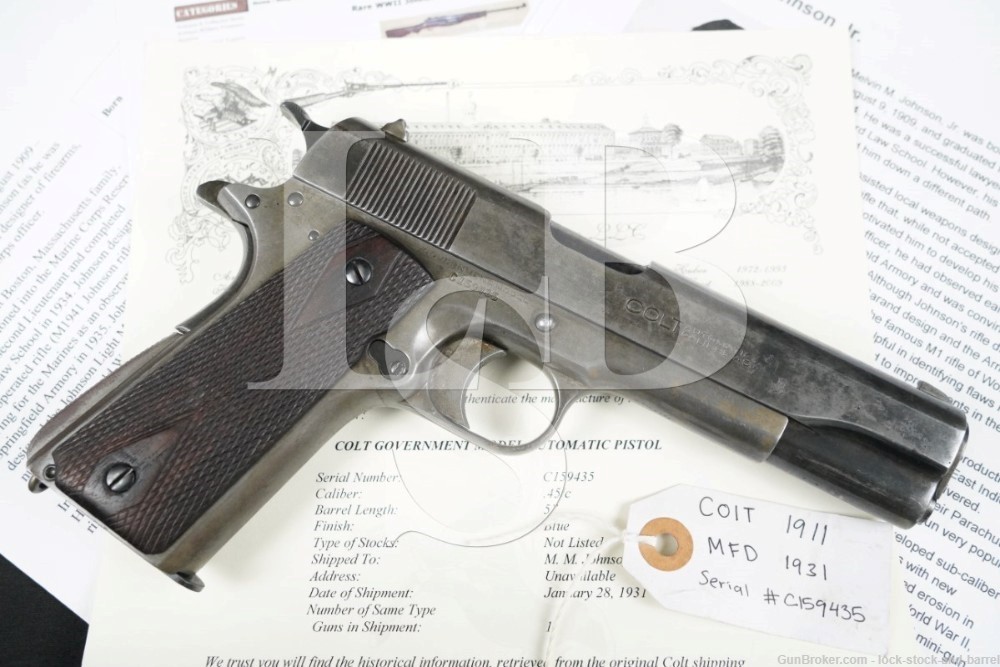 Sights / Optics: The front sight is a blade fixed to the front of the slide, it is not original to the gun. The rear sight is a square notch dovetailed to the rear of the slide.

Stock Configuration & Condition: The grips are two-piece checkered wood with smooth diamonds around the grip screws. There are some places, mostly at the bottom of the panels, where the checkering pattern is not complete, missing some cuts. There are some scattered light nicks, scuffs and scratches. There are tool marks around the grip screws. The checkering is generally well defined. There are no chips or cracks. Overall, the grips are in Very Good condition as not original to the gun.

Bore Condition: The lands are light gray, the grooves are dark. The rifling shows wear, but is well defined. There is scattered erosion in the bore, most notable in the grooves.

Overall Condition: This handgun retains about 40% of its current metal finish. Most surfaces have the mottled gray appearance of old cold blue and there are a few scattered areas of stronger blue finish. Some areas are worn to white, most notable in the grip areas. There are some scattered light nicks, scuffs and scratches, most notable in the top of the frontstrap. The action shows operational wear. The barrel has generally strong blue finish. The screw heads are sharp to lightly worn with strong slots. The markings are generally clear with rounded edges, the left side trigger guard markings are worn and incomplete. Overall, this pistol is in Good-Very Good condition as refinished.

Mechanics: The action functions correctly. The trigger is crisp. The slide has light play to the frame. We did not fire this handgun. As with all used firearms, a thorough cleaning may be necessary to meet your maintenance standards.

Box, Paperwork & Accessories: This pistol comes with a single two-tone 7-round magazine, a Colt Archives letter and a series of printouts with information about Melvin Maynard Johnson Jr. including a copy of his original commission as a 2nd Lieutenant in the Marine Corps Reserve of the United States. The Archive letter indicates that this pistol was shipped January 28, 1931 to M.M. Johnson as the only gun of its type in the shipment. The magazine is marked “COLT / 45 AUTO.” on the floorplate, showing minor operational wear, some light surface oxidation on the right side, intact feed lips and a strong spring.

Having secured a contract for the US Military sidearm, Colt also offered the pistol to the commercial market as the “Government Model”. This is a Colt commercial Government Model made in 1931, after the M1911A1 changes had been adopted, including relief cuts at the trigger and arched mainspring housing. This pistol appears to have been someone’s favorite, having had a new front sight installed, a new barrel, and showing wear consistent with use over the last 90 years, with the pistol having been refinished at some point in the past.

As to whose favorite pistol this was, that is an intriguing mystery. Colt’s records indicate that this pistol was sold to an M.M. Johnson, but does not note where the gun was shipped, possibly indicating that it was picked up from the factory. It is too bad that the buyer’s address was not recorded, as it would help to pin down exactly who this M.M. Johnson was. Firearms fans may be scratching their heads now, thinking that this name sounds familiar, and it should. Right around 1931, a man named Melvin Maynard Johnson would have been in his early 20s, two years from being commissioned as a 2nd Lieutenant in the Marine Corps Reserve, three years from graduating Harvard Law School, and seven years from filing a patent for an autoloading rifle mechanism he would later use in the design of his 1941 rifle and light machine gun, now known as the Johnson Rifle and Johnson Light Machine Gun.

This is an intriguing possibility, and Melvin Johnson certainly displayed an interest in firearms, as well as living on the East coast. To be sure, it would have been something of a trek from Boston to Hartford just to pick up a pistol, but if Mr. Johnson found himself in town well, who among us could have passed up the chance to pick up a Government Model from the Colt factory in 1931? It is even possible that the pistol was purchased by Johnson’s father, who had the same name.

All of the old 1911 Colts are collectable, and we are sure this isn’t going to be an exception. It will certainly make for a fun research project to see if you can pin down a connection between this pistol and Melvin Maynard Johnson. Please see our pictures and good luck in your bidding!