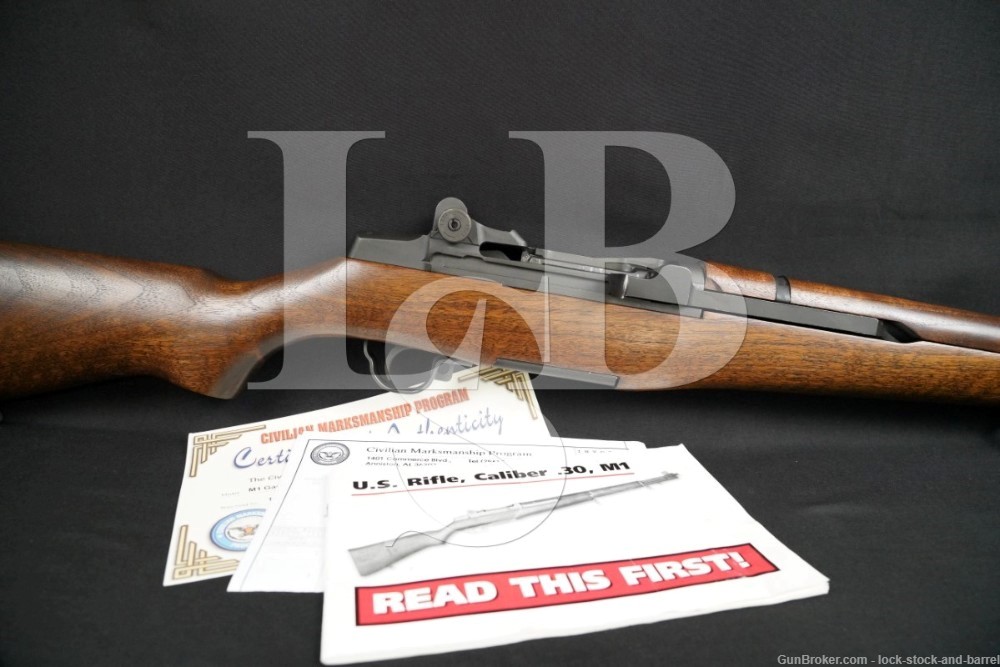 Stock Configuration & Condition: The left side of the stock is marked with a Civilian Marksmanship Program stamp “C.M.P. / eagle holding arrows”.
The new production hardwood stock has a pistol grip, metal nose caps, a stacking loop, two sling loops, and a metal buttplate with hinged door for storage in the butt. The right side of the grip shows several small light scratches. The wood shows some other scrapes and handling marks. The LOP measures 13 1/4 inches from the front of the trigger to the back of the buttplate. The stock rates are about Very Good Plus to Fine condition.

Overall Condition: This rifle retains about 97% of its metal finish.
The bottom rear of the receiver has some surface erosion showing through the new finish. This area also shows a few small scrapes. The metal shows scuffs, light scrapes & light handling marks. The receiver and bolt show light operational wear. The markings are deep. Overall, this rifle rates in about Very Good Plus to Fine condition.

Box, Paperwork & Accessories: The rifle comes with an owner’s manual, shipping invoice and Certificate of Authenticity from the Civilian Marksmanship Program (CMP). The certificate & invoice are marked with the rifle’s serial number.
Please see photos as to the condition of the listed items.

This Springfield Armory M1 Garand was built back in 1955. It eventually was placed into storage and refurbished by the  Civilian Marksmanship Program (CMP). The rifle was refinished and dropped into a new production CMP stock during the refurbishment. The rifle was eventually sold through the CMP. A shipping invoice and Certificate of Authenticity from the CMP are included in the auction. This is a good looking M1 Garand with a strong bore. The rifle’s action uses all Springfield parts which makes it quite collectible. Good luck.