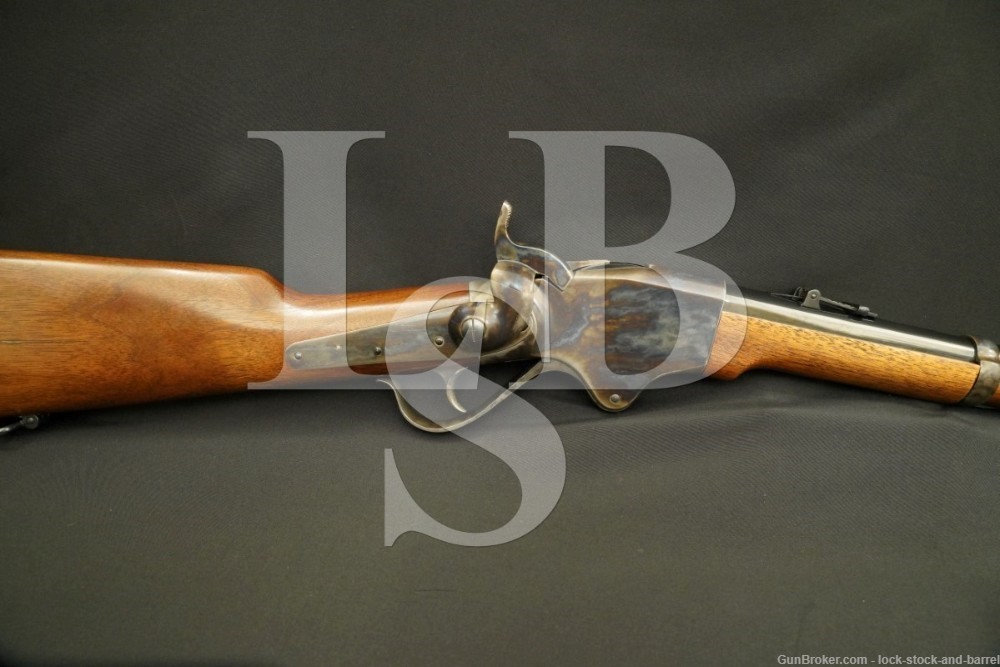 Sights/ Optics: The front sight is a blade marked with a white dot fixed by the muzzle. The rear sight is a ladder which presents a “V”-notch in the down position. When raised the ladder presents a “V”-notch slider and a “V”-notch integral to the top. The ladder is marked 2-9, inclusive.
Stock Configuration & Condition/ Grip: The stocks are two-piece smooth wood featuring a forend with a barrel band, a straight wrist with a bar on the left side that has a fixed saddle ring, a straight comb and a metal butt-plate with a slot for the included magazine tube. There is a fixed sling swivel on the belly. The stocks have only light handling marks and lack any notable defects. There are no chips or cracks. The LOP is 13” from the trigger to the rear end of the butt-plate. The butt-plate has only light handling marks. Overall, the stocks are in Fine-Excellent condition.

Overall Condition: The rifle retains about 97% of its metal finish. There are only light handling marks on the rifle’s metal surfaces and it lacks any notable defects. The markings remain clear. The screwheads have light tool-marks but they remain serviceable. Overall, the rifle is in Fine-Excellent condition.

Our Assessment: This Chiappa manufactured replica of the Spencer Carbine Model 1865 is a lever-action repeating rifle chambered for .45 Long Colt rounds. The Spencer Rifle was invented by the prolific inventor Christopher Spencer around 1859. It was one of the first lever-action rifles. When the Civil War broke out in 1861 the US military did not accept his rifle for service (he lived in Connecticut and had no contact with the Confederates). In 1863, Spencer met with President Abraham Lincoln to get his rifle accepted for service with the US military. Lincoln was impressed with the gun and the following day Spencer gave a demonstration of the gun’s capabilities to Lincoln, Secretary of War Edwin Stanton and several other officials on the Mall. The demonstration must have left a positive impression because the US ordered approximately 13,000 rifles and carbines in addition to 58 million cartridges soon thereafter. By the end of the Civil War in 1865, nearly 100,000 Spencer rifles and carbines had been manufactured for use by the US military. Following the war, the over-abundance of surplus rifles left little demand for new ones from the factory. Spencer went bankrupt and his company’s assets were acquired by Oliver Winchester. This is a beautifully crafted replica which remains mechanically sound. Good luck on your bid!