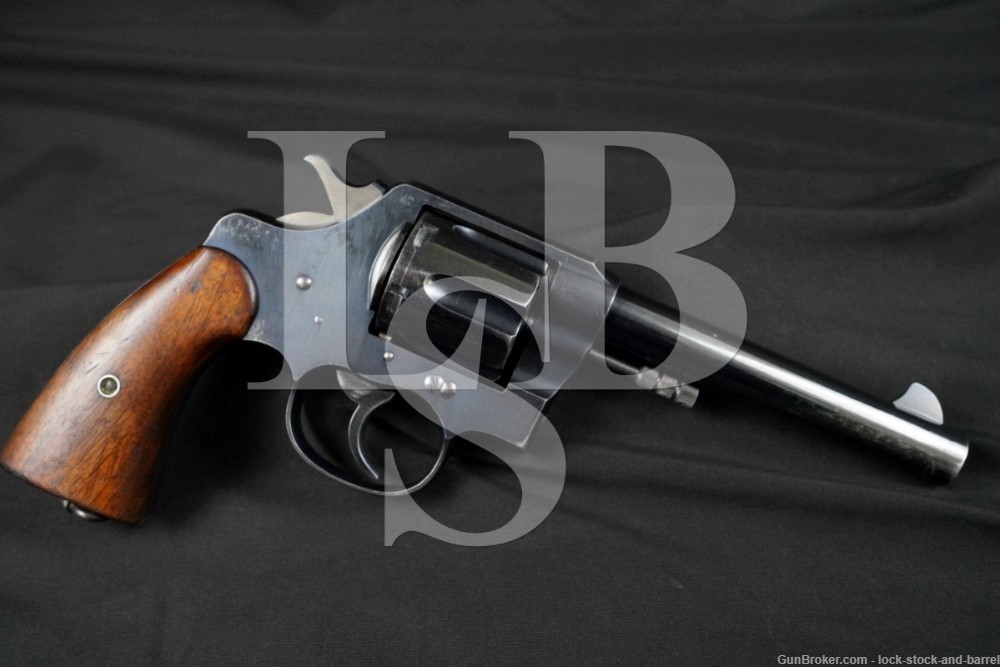 Sights/Optics: The front sight is a tall shark’s fin style blade. The rear sight is a “U” shaped groove in the top of the receiver.

Stock Configuration and Condition: The grips are two-piece smooth wood. The grips have some scattered light nicks, scuffs and scratches with more notable marks on their bottom faces. The left panel has a tiny loss at the bottom-front corner. There is thinning finish at the bottom edges. There are no cracks. Overall, the grips are in about Very Good condition.

Bore Condition: The bore is bright with sharp rifling. There is no erosion in the bore, but there is some stubborn leading in front of the forcing cone.

Overall Condition: This revolver retains about 90% of its current metal finish. The finish is thinning at all edges, most notable at the muzzle and on the trigger guard. There is some light finish wear on each side of the barrel toward the muzzle-end. The backstrap has handling wear and there is finish wear in the top of the frontstrap behind the trigger guard. There are some scattered minor nicks, scuffs and scratches. There are infrequent spots of minor surface oxidation with one spot above the cylinder latch which is more notable, though small. The butt has some light erosion near the lanyard ring and finish wear which has gone to a light patina. The action shows operational wear including a turn-line on the cylinder. The screws range from sharp to lightly tool marked, all have strong slots. Markings are clear. Overall, this revolver is in Very Good-plus condition.

Our Assessment: Colt came out with their large framed double action New Service revolver in 1898. The Army was looking for a large caliber double action pistol to replace their .38 caliber S&W and Colt pistols that had proved to have inadequate stopping power during the Philippine-American war, and adopted the New Service revolver chambered in .45 Colt in 1909. The Model 1909 would eventually be replaced as the US Army sidearm by the 1911, but the 1909 played a part in ensuring that America’s first autoloading sidearm would be a .45. This M1909 Colt New Service was made in 1911, and is dotted with R.A.C. stamps for inspector Rinaldo A. Carr. This example is in Very Good-plus condition, showing quite minor wear for a service revolver, retaining a great bore and strong mechanics. This will be a nice addition to a US Military sidearm, Colt or early 20th Century revolver collection. Please see our photos and good luck!