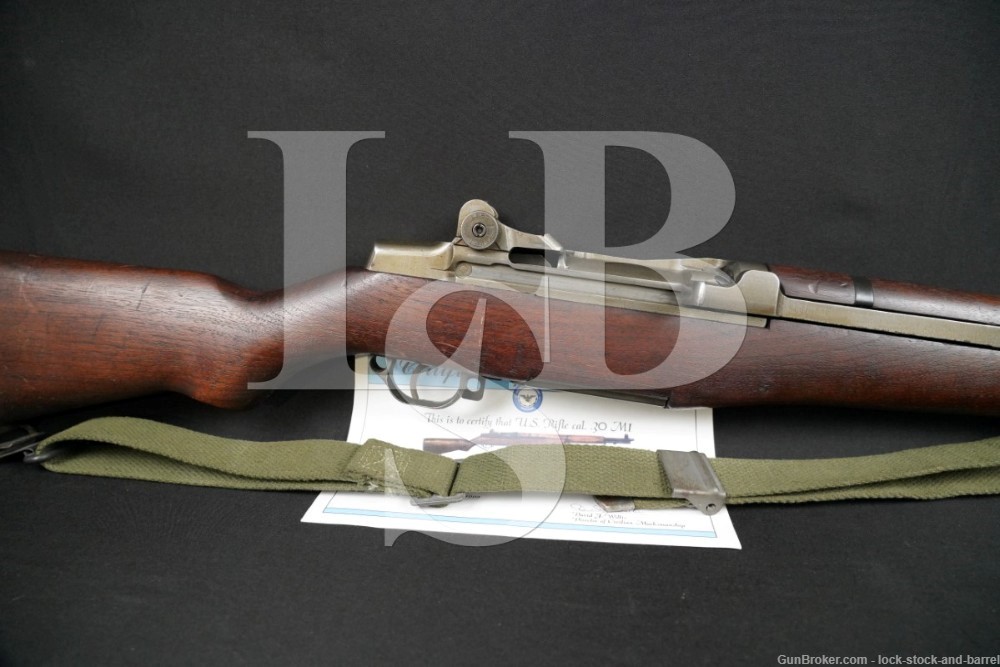 Sights / Optics: The front sight is a blade set between two protective wings. The rear sight is a fully adjustable aperture sight. The windage knob is marked “LEFT arrow” twice and “BME”. The elevation knob is marked from “2-12” in increments of 2 and “W in a hexagon”.

Stock Configuration & Condition: The left side of the buttstock is marked “R.I.A.” next to the grip. This Rock Island Arsenal mark appears to have been added. It is normally “boxed” and includes the inspector’s initials. The face of the grip is marked with 2 “circled P” proofs. One is overstamped with a “star”.
The three piece hardwood stock has a pistol grip, metal nosecaps, stacking loop, two sling loops, and a metal buttplate with hinged metal door for storage in the butt. The buttplate shows surface erosion and wear. The wood shows several scrapes, scratches & compression marks. Many have damaged areas of the surface wood. The right side of the butt has been sanded smooth below the barrel shank. The LOP measures 13 inches from the front of the trigger to the back of the buttplate. The stock rates in about Very Good overall condition as refurbished.

Bore Condition: The muzzle & grooves are semi bright and the rifling is deep. There is fouling at the muzzle and in the grooves. There is no erosion. The bore shows an M.E. of 0.8. The throat shows a T.E. of 2.

Overall Condition: This rifle retains about 95% of its metal finish. The bottom rear of the receiver has surface erosion bleeding through the new finish causing discoloration. The metal shows scrapes, small scratches and thinning on the leading edges of the metal. The most prominent are on the trigger guard. The receiver shows oil residue. The receiver and bolt show light operational wear.  The markings are deep. Overall, this rifle rates in about Very Good Plus condition.

Box, Paperwork & Accessories: The rifle comes with a Certificate of Authenticity from the Civilian Marksmanship Program (CMP) and a green canvas sling.
Please see photos as to the condition of the listed items.