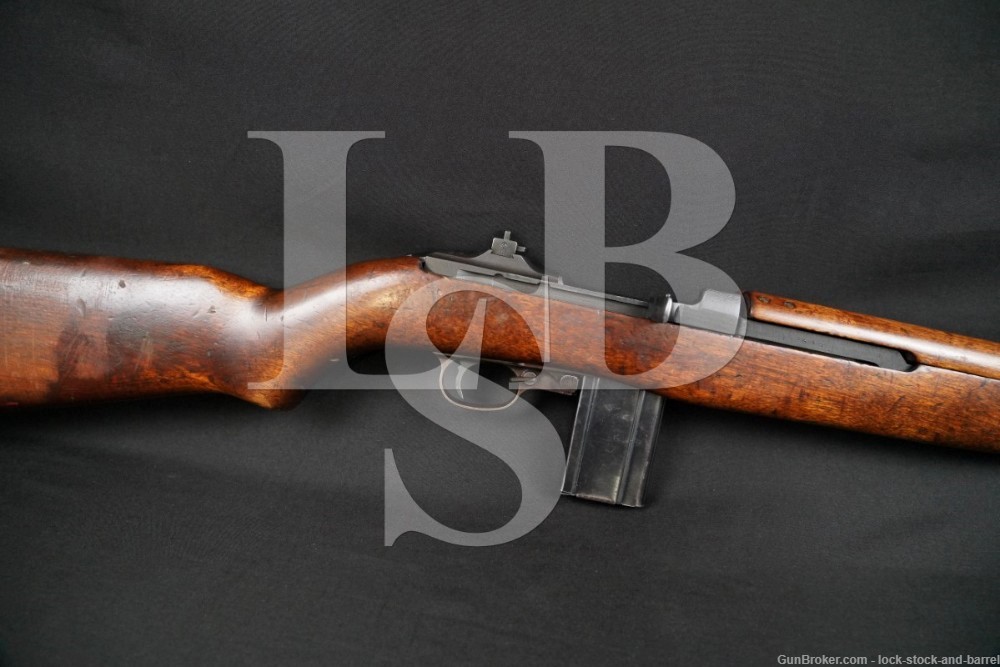 Make: Rock-Ola Manufacturing Corporation.
After WWI this M1 Carbine was provided to the Bavarian Rural Police and later to the Austrian Police.

Sights / Optics: The front sight is a post set between two protective wings. The rear sight is a flip up Type I dual aperture assembly.

Stock Configuration & Condition: The two piece hardwood stock has a pistol grip, replacement barrel band with sling loop, sling well, sling pass through and a metal buttplate. Both sides of the butt show sanding marks. The wood shows numerous scrapes, scratches and compression marks. Several have damaged or removed small portions of surface wood. The LOP measures 13 1/4 inches from the front of the trigger to the back of the buttplate. The stock rates in about Good to Very Good overall condition.

Finish Originality: Original to Rebuild
Portions of the metal have been treated with cold blue.

Overall Condition: This rifle retains about 95% of its metal finish. The areas of the metal have been treated with cold blue. The sides of the trigger group show light thinning under the wood. The remaining metal shows scrapes, small scratches and handling marks. The bolt and receiver show some operational wear. The markings on the metal are deep. The markings on the wood are faded. Overall, this rifle rates in about Very Good condition.

Box, Paperwork & Accessories: The rifle comes with a Certificate of Authenticity from the Civilian Marksmanship Program (CMP) and a 15 round magazine. The magazine shows scrapes, small scratches and oxidation. It is in about Very Good condition.
The 15 round magazine is not available to residents of California or any other state with magazine capacity restrictions.
Please see photos as to the condition of the items listed.

Our Assessment: The M1 Carbine was developed and produced after WWII started. Over 6 million were made by a number of U.S. companies to assist with the all out war effort. The M1 Carbine was widely issued to U.S. Military Forces which numbered over 16 million during WWII. The M1 Carbine contributed greatly to U.S. efforts during WWII.
The Rock-Ola Manufacturing Corporation was a top maker of jukeboxes. Starting in 1935, Rock-Ola sold more than 400,000 jukeboxes under the Rock-Ola brand name. It is thought to have inspired the term Rock & Roll. During WWII Rock-Ola was one of the many companies who helped with the war effort. Rock-Ola only produced about 3.7% of the total number of wartime M1 Carbines. Due to both the relative rarity of Rock-Ola M1 Carbines and the distinctive name, Rock-Ola M1 Carbines prized among collectors.

This WWII Rock-Ola M1 Carbine was made back in 1944 and has quite the history. In 1946 it was issued to the Bavarian Rural Police (Landpolizei) in Germany where it served for some time. It has Bavarian markings on the receiver, bolt and op rod. In 1956 it was purchased by Austria and issued to the Austrian Police (Gendarmerie). The bottom of the trigger guard is stamped with markings for the Austrian state of Tirol.
At some point The rifle was rebuilt but we do not know if it was rebuilt in Germany or in Austria. The rifle was purchased through the CMP and comes with a Certificate of Authenticity. This is a good looking M1 Carbine to add to your collection. Good luck.
For more German & Austrian M1 Carbine info see:
www.bavarianm1carbines.com/bavaria.html www.bavarianm1carbines.com/Gendarmerie.html