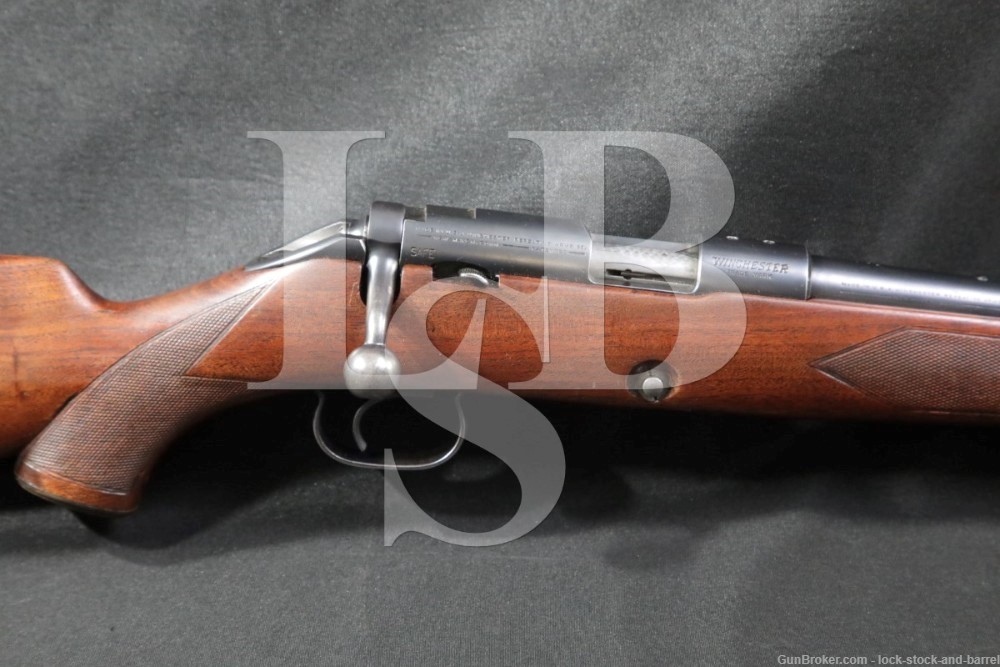 Model: 52 B This is a transitional Model 52B that was manufactured with a 52A stock, as visible by the safety cutout on the left side at the rear, making this rifle considerably more rare and collectible.

Sights / Optics: The front sight is a hooded blade dovetailed atop a textured ramped riser that is fixed to the barrel. There is a pair of drilled, tapped, and filled holes on the top of the barrel and receiver for mounting an optic (not included). There is no rear sight.

Stock Configuration & Condition: The stock is a one-piece walnut with a pistol grip, a straight comb with cheek rest on the left side, and a flat shotgun style checkered synthetic Winchester buttplate. It features the hand-cut checkering on both sides of the forestock, as well as the three hand-checkered “diamonds” on the forestock’s bottom. Hand-cut checkering on both sides of the pistol grip is as elegant as it is functional. The pistol grip has a hard rubber Winchester cap (marked “WINCHESTER REPEATING ARMS CO”), and the forend has an ebony nose cap. Sling plates are inlaid and screwed to the belly and the forend. The stock has some scattered light nicks, compressions, and scratches. The most notable are compressions on the left side of the forend behind the checkering. The checkering is generally well defined throughout, though showing more wear on the bottom diamond checkering. There are no chips or cracks. The LOP measures 12 3/4” from the front of the trigger to the back of the buttplate. The buttplate’s checkering is sharp and there are light marks along the edges. The synthetic buttplate on this rifle is not appropriate for 1937 production, and is not original to the rifle. Overall, the stock is in Very Good-Plus condition.

Overall Condition: This rifle retains about 87% of its metal finish. There is light pitting around the muzzle. The front fifth of the barrel has been touched up with cold blue. The left side of the receiver has three holes that have been permanently filled and this area has also been touched up with cold blue. There is thinning at the leading edges of the receiver. The bottom metal shows scattered light erosion and finish loss. There are sparsely scattered light nicks and scratches on the barrel and receiver. The bolt knob has thinned considerably. The action shows operational wear and there is light oxidation on the bolt. The screw heads range from sharp to tool marked with strong slots. The markings are clear. Overall, this rifle is in about Very Good condition.

Mechanics: The action functions correctly. The trigger is light and crisp. We have not fired this rifle. As with all used firearms, a thorough cleaning may be necessary to meet your maintenance standards.

Box, Paperwork & Accessories: This rifle comes with a 5-round blued steel magazine. The magazine is marked on its floorplate with “MADE IN U.S.A. / WINCHESTER / TRADE MARK / PAT. NOV. 25, 1919.” The magazine shows light operational wear.

Our Assessment: From its inception, Winchester had something special in mind for their Model 52. This rifle was never intended to be a typical .22 long rifle plinker, but rather a world class firearm that just happened to be chambered in a rimfire caliber. Fit and finish was comparable to a fine European sporting rifle, and a simple walk through the woods in search of small game with the Model 52 in hand could evoke the same emotions one might experience when hunting Africa’s fabled “Big 5,” only without fear of being stampeded or mauled! A great shooter then and now, accuracy rivaled its competitors; rest assured, the Model 52 would more than hold up its end of the bargain in any target shooting competition. The Model 52 underwent several changes throughout its 60-year production run, with mechanical and design alterations designated by different suffixes. Field & Stream, among the most respected hunting and fishing magazines ever published, called the Winchester Model 52 “one of the 50 best guns ever made.” Differences implemented with the model 52B were the replacement of the original left-mounted wing safety with a more convenient sliding-plate safety on the right side of the receiver. The 52B design also raised the left receiver wall abreast the magazine higher than the right, whereas on earlier versions both sides were flush with the loading platform. This rifle is in about Very Good overall condition with about 87% of its metal finish remaining. The bore is bright with sharp rifling and is a shooter for sure. This is a nice old Winchester with decades of shooting left in it. Please see our photos and good luck!