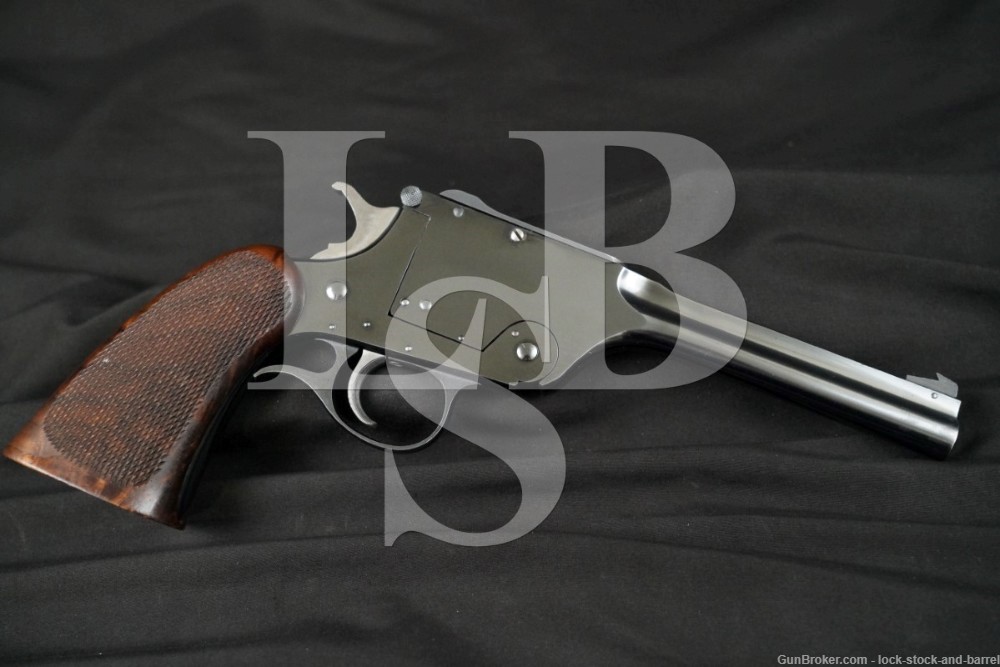 Sights / Optics: This pistol is mounted with a blade front sight and an elevation adjustable square notch rear sight.

Stock Configuration & Condition: The grip is one piece checkered wood. The smooth portions show finish wear and some minor little nicks and scratches. There is a scuff on the bottom at the rear. There are no chips or cracks and the checkering is generally sharp. The grips rate in about Very Good-Plus overall condition.

Overall Condition: This pistol retains about 94% of its metal finish. There is light thinning on the leading edges that is most notable around the muzzle. There are infrequently scattered little nicks and faint scratches throughout the metal surfaces. There is some faint oxidation on the hammer and trigger. There are light freckles of oxidation on the front strap. There is minor operational wear. The screw heads are in good serviceable condition with a few showing only light wear. The markings are clear. Overall, this gun rates in about Fine condition.

Mechanics: The action functions correctly. The barrel locks up tightly with no perceptible play. The trigger pull is very light. The top break functions correctly. We did not fire this pistol. As with all previously owned firearms, a thorough cleaning may be necessary to meet your maintenance standards.

Our Assessment: Total production of this pistol was only 3300. In 1932, an H&R pistol was used to set a new U.S. pistol record, and would go on to become the most famous firearm of its kind—the U.S.R.A. single-shot target pistol. This pistol was so accurate that it was adopted by the U.S. Army Pistol Team.

From www.ogca.com: “The rifling equipment used in making the barrels for this match pistol cut the grooves while simultaneously scraping the top of the lands to remove marks. Barrels for this pistol were so smoothly rifled that lapping was unnecessary. The American Rifleman in the March, 1930 issue announced and described an improved model now called the “U.S.R.A. Model” and so marked on the left side. From this point on, it is inconceivable that H and R made any profit directly on the sale of this pistol. With the limited production on a no costs spared constant design change basis, any direct profit from the sale of the pistol was probably not achieved. What H and R wanted was a reputation for the best single shot pistol – which they achieved.

This particular pistol is in Fine condition and should be as fun to shoot as it is accurate. These USRA pistols have become valuable for collectors as well as shooters. Please see our photos and good luck!