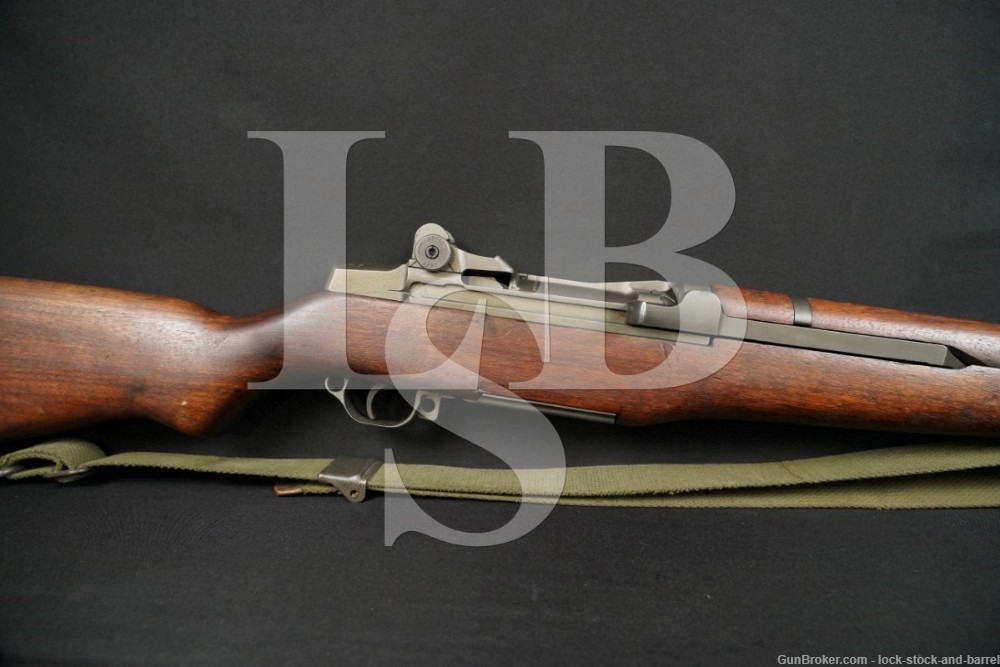 Stock Configuration & Condition: The face of the grip is marked with a “circled P” proof and a “P” proof. The base of the grip is marked with a faded “colored triangle”.  The hardwood stock has a pistol grip, metal nosecaps, stacking loop, two sling loops, and a metal buttplate with hinged metal door for storage in the buttstock. The bottom of the stock shows edge repairs on both sides, at the trigger group. The bottom left of the forearm shows a filled repair. The top of the handguard and bottom rear of the butt show marks that have removed some surface wood. The stock shows other scrapes, scratches & compression marks. The wood shows some paint transfer. The LOP measures 13 inches from the front of the trigger to the back of the buttplate. The stock rates in about Very Good overall condition as refurbished.

Overall Condition: This rifle retains about 90% of its metal finish. The metal shows scuffs and light scrapes. The bottom of the receiver shows thinning and discoloration from oxidation. The receiver legs show some light scrapes & thinning. The metal has areas of oxidation bleeding though the new finish causing discoloration. The receiver and bolt show light operational wear. The markings are deep. Overall, this rifle rates in about Very Good Plus condition as refinished.

Box, Paperwork & Accessories:  The rifle comes with a green canvas sling, combination tool, plastic oiler, and a grease pot.
Please see photos as to the condition of the listed items.

This Harrington & Richardson M1 Garand was made in 1953 or 1954. In June of 1966 it was Arsenal Rebuilt at the Letterkenny Army Depot. It is marked accordingly on the receiver leg.  It was rebuilt using Springfield parts and an LMR barrel. LMR made quality barrels mainly for International Harvester but did provide barrels for some H&R Garands. The rifle’s metal has since been refinished and the wood has been refurbished. This is a good looking rifle to add to your Military Collection.