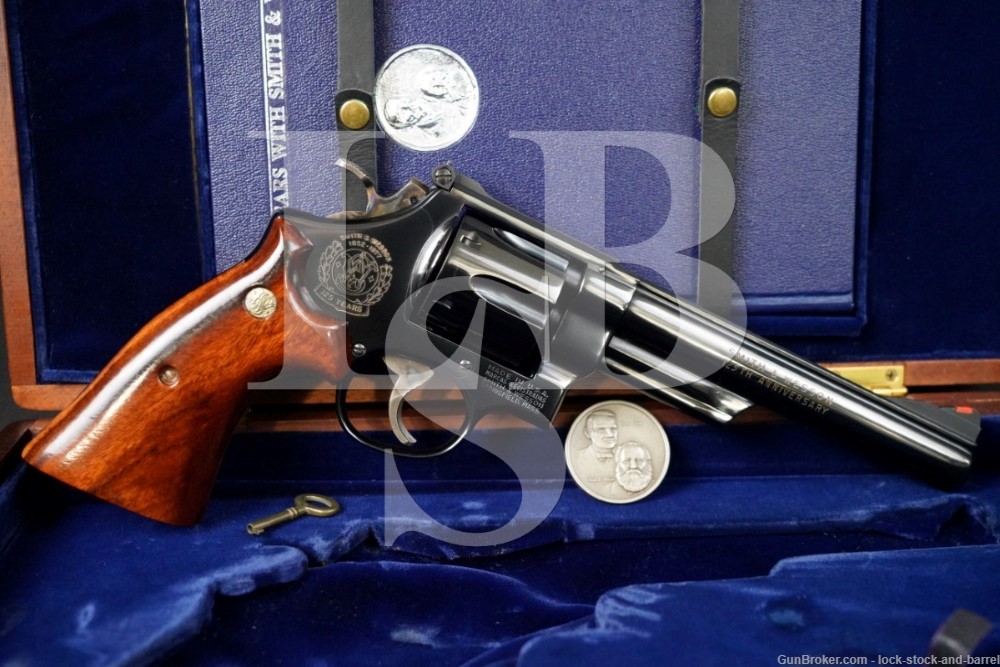 There is a brass plate for the mahogany presentation case lid, it is marked “Smith & Wesson / 125th Anniversary Commemorative / 1852-1977 / Billy Ray Cox”. A nickel-silver medallion is included with the S&W 125th anniversary commemorative seal on one side, the other with portraits of Horace Smith and Daniel B. Wesson. The included book is titled “125 YEARS WITH SMITH & WESSON” on the cover and spine and the cover has an inlaid silver-colored medallion with the same portraits of Smith & Wesson found on the commemorative medallion.

Sights / Optics: The front sight is a serrated ramped blade with red insert fixed to the barrel’s serrated rib. The rear sight is a square notched, white outlined leaf in a base adjustable for windage and elevation screwed to the topstrap.

Stock Configuration & Condition: The grips are two-piece smooth Goncalo Alves presentation grips with gold-colored S&W medallions. There are some scattered light handling marks. There is a small crack on the left panel at the top in the cut. Otherwise, there is just light handling wear. Overall, the grips are in about Fine condition.

Overall Condition: This handgun retains about 99% of its metal finish. There are a few scattered light handling marks, most noticeable on the barrel at the muzzle and backstrap at the bottom. There is a faint turn line on the cylinder, hardly noticeable. The screw heads are sharp. The markings are clear. Overall, this handgun rates in about Excellent condition.

Mechanics: The action functions correctly. The double-action trigger is smooth and the single-action trigger is crisp. The cylinder locks up with hardly any play on each of the six chambers. We did not fire this handgun. As with all used firearms, a thorough cleaning may be necessary to meet your maintenance standards.

Box, Paperwork & Accessories: This revolver comes with a 125th Anniversary mahogany presentation case with blue felt interior with fitted depressions for the revolver, medallion and inside the lid for the book “125 Years with Smith & Wesson” by Roy Jinks with thumb-snap straps to hold the book in place. The lining is coming apart in certain areas. The case has some scattered marks and scratches.

Our Assessment: In 1977, Smith & Wesson passed the milestone of 125 years providing the world with repeating cartridge handguns. In 1852, Horace Smith and Daniel Wesson, along with financier Cortland Palmer, began work on their Magazine Pistols, which would go on to launch not just Smith & Wesson but also Winchester! While the Magazine Pistol, later called the Volcanic, would not turn out to be a major success, after obtaining exclusive rights to Rollin White’s bored-through cylinder patent, Smith & Wesson began producing cartridge revolvers, and they would continue producing revolvers to this very day. This is Smith & Wesson’s model 25-3, a heavy barreled target revolver chambered in .45 Colt with a 6 1/2″ barrel, adjustable sights, produced to commemorate 125 years of Smith & Wesson. The revolver is in about Excellent condition with about 99% of its metal finish, and comes with its presentation case, commemorative medallion and the book “125 Years with Smith & Wesson” by S&W historian Roy Jinks. This should make for a great addition to a Smith & Wesson collection and would make a great addition to any gun room in America. Please see our pictures and good luck!