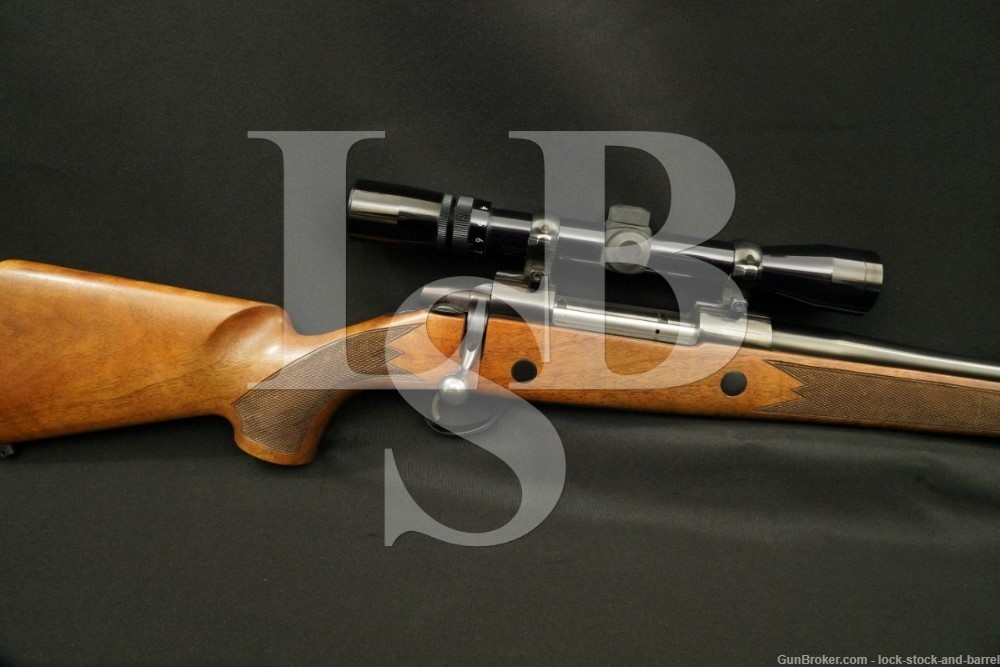 Barrel Length: 26” to the end of the muzzle break.

Sights / Optics: There are two drilled and tapped holes at the front of the barrel. The rear sight is a U-notch adjustable for elevation atop an escalator style base that is fixed to the barrel. The top of the receiver is equipped with a Bushnell Sportview optive with 3-9x magnification and a duplex reticle. The scope shows light operational wear and the lenses are clear. The scope rates in about Fine overall condition.

Stock Configuration & Condition: The stock is checkered wood and features a pistol grip with a right palm swell, monte carlo comb, cheek piece, two thru bolts, sling stud front and rear, and a red Sako buttpad. There are evenly dispersed faint draglines and light compressions. There is a slightly more notable dark compression on the bottom of the forend. There are no chips or cracks. The checkering is sharp with few interruptions. The LOP measures 14” and 13 1/4” from the trigger to the rubber buttpad and wood, respectively. The buttpad shows rub wear discoloration. The stock rates in about Fine overall condition.

Bore Condition: The bore is bright and the rifling is sharp. There is no erosion in the bore, just light fouling on the lands.

Overall Condition: This rifle retains about 93% of its metal finish. There are some slightly thinned spots on the top of the barrel ahead of the rear sight. There is thinning around the edge of the muzzle break. The floorplate has thinned significantly. The rear of the bolt and handle have taken a plum hue, as has the receiver. There are a few nicks and scratches throughout the metal and there is minor operational wear. The screw heads show light use with strong slots. The markings are crisp. Overall, this rifle rates in about Fine overall condition.

Mechanics: The action functions correctly. The trigger is light and crisp. We did not fire this rifle. As with all previously owned firearms, a thorough cleaning may be necessary to meet your maintenance standards.

Our Assessment: In 1919, two years after Finland declared independence from the Russian Empire, the Suojeluskuntain Yliesikunnan Asepaja (Civil Guard Supreme Staff Gun Works) opened in a former Helsinki brewery to repair private arms and recondition Russian military rifles for Finnish service. The rifle repair shop became financially independent of the civil guard in 1921. The Suojeluskuntain Yliesikunnan Asepaja moved from Helsinki to an ammunition factory in Riihimäki on 1 June 1927, and reorganized as SAKO in the 1930s. Sako hit the civilian market in the 1940’s making some of the world’s finest and most accurate rifles. They were so good that they became a part of the Beretta group. This AV is no exception. The bore is bright with beautiful rifling and the trigger is light as a feather. This rifle is chambered for 375 H&H Magnum, a medium-bore rifle cartridge introduced in 1912 by London based gunmaker Holland & Holland. The .375 H&H often is cited as one of the most useful all-round rifle cartridges, especially in shooting large and dangerous game. This rifle undoubtedly has many more decades of shooting left in it. Please see our photos and good luck