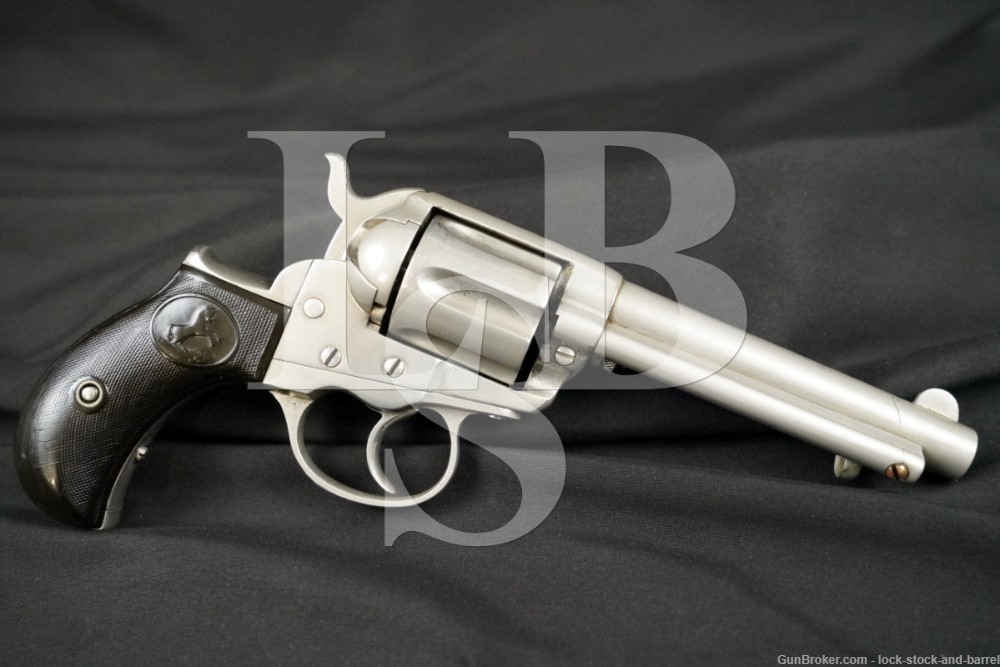 Markings: The top of the barrel is marked “COLT’S PT. F. A. MFG. Co. / HARTFORD. CT. U.S.A.”, this marking is worn and incomplete. The left of the barrel has only “D.A.” legible, preceded by what was “COLT”. The left side of the frame is marked “PAT. SEPT. 19, 1871 / “   “  15, “ 74. / JAN. 19, “ 75.” and with an incomplete circled rampant colt. The underside of the frame at the grip frame, the front of the trigger guard just behind it and the front underside edge of the backstrap are marked “81680”, the backstrap’s marking is shallow and incomplete. The rear of the loading gate has assembly number “883”. The rear of the cylinder is marked “3  6  0 5”. There appears to be something hand-scribed on the interior of the right grip panel, but we can’t make it out. It does not appear to correspond to the serial number.

Sights/Optics: The front sight is a blade fixed to the barrel. The rear sight is a “V” groove in the top strap.

Stock Configuration and Condition: The grips are checkered black hard rubber on a bird’s head grip frame, with a Rampant Colt in an oval at the top of each panel. The grips have handling wear, mostly toward the bottom and most notable on the right panel. There are some scattered light scuffs and scratches. The left panel has two notches on its rear edge which appear to be intentionally applied. There are no chips or cracks. The checkering ranges from well defined to worn smooth. There is fairly good detail in the rampant colts. Overall, the grips rate in Very Good-Fine condition as Antique.

Finish Originality: Refinished, the cylinder is not original to the gun.

Bore Condition: The bore is gray. The rifling is sharp where not interrupted by erosion. There is scattered light-moderate erosion and pitting in the bore.

Overall Condition: This revolver retains about 90% of its current metal finish. There is some finish loss at edges, mostly on the leading edges of the barrel, cylinder and frame. There is some scattered minor erosion under the finish. Most areas have a uniform cloudy appearance with the grip areas being more bright. There are some scattered light nicks, scuffs and scratches, most notable in the backstrap, on the left of the frame at the cylinder stop pin, on the top of the ejector housing at its mounting screw and above that on the right of the barrel. There is a firing pin strike-mark on the rear face of the cylinder next to one of the stop notches. The action shows operational wear. The markings range from clear to worn and incomplete. The screw heads range from sharp to tool marked with strong slots and the ejector mounting screw appears to be a replacement. Overall, this revolver is in Good condition, as refinished Antique (see Mechanics).

Mechanics: The cylinder has a tendency to over-rotate, possibly due to being a replacement. Otherwise, the action functions correctly. The cylinder locks up with no play. The double action trigger is fairly smooth. The single action is crisp. We did not fire this revolver. As with all used firearms, thorough cleaning may be necessary to meet your maintenance standards.

Our Assessment: The Colt M1877 was a double action revolver manufactured by Colt’s Patent Fire Arms from January 1877 to 1909 for a total of 166,849 revolvers. The Model 1877 was offered in three calibers, which lent them three unofficial names: the “Lightning”, the “Thunderer”, and the “Rainmaker”. The principal difference between the models was the cartridge in which they were chambered: the “Lightning” being chambered in .38 Long Colt; the “Thunderer” in .41 Long Colt. An earlier model in .32 Colt known as the “Rainmaker” was offered in 1877. The M1877 was designed by one of the inventors of the M1873 Colt Single Action Army, William Mason, as Colt’s first attempt at manufacturing a double-action revolver and was also the first successful US-made double-action cartridge revolver. Neither “Lightning” nor “Thunderer” were Colt designations, nor used by the factory in any reference materials. Both terms were coined by Benjamin Kittredge, one of Colt’s major distributors, who was also responsible for the term “Peacemaker” for the Single Action Army. Old West Outlaw John Wesley Hardin frequently used both “Lightning” and “Thunderer” versions of the Colt 1877 revolver. This Thunderer has had some work put into it, with the cylinder replaced and the whole revolver given a new nickel finish. It looks great for its age and apart from a timing issue, the mechanics are strong. This would be a neat addition to a Colt collection, especially one missing the “Thunderer”. Please see our photos and good luck!