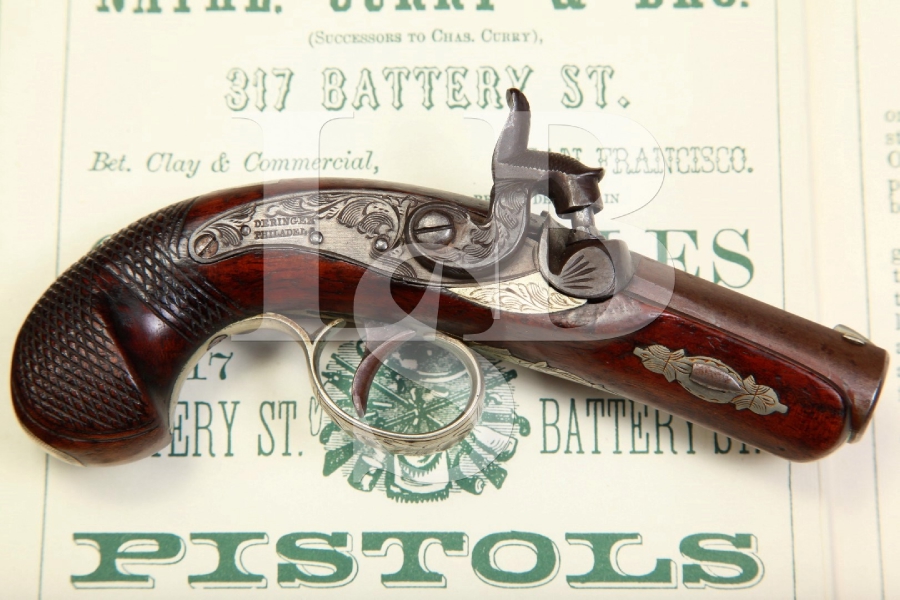 Markings: The top barrel flat and the side of the lockplate are both marked “DERINGER / PHILADEL” followed by what should be a small “a”, however the mark is illegible in both cases. The round undersides of the barrel and breechblock are each marked with a “VI”. The left side flat of the breechblock is marked with the Sunburst “P” proof mark. The front trigger guard finial has a pineapple design similar to the drawing labeled #7 on page 348 of Norm Flayderman’s “Guide to Antique American Firearms”, 8th edition. The trigger guard, sideplate, lockplate, flash plate, wedge escutcheons and top tang are scroll engraved. The shield behind the top tang and the tear shaped cap in the bottom of the butt have been border engraved with a pattern that resembles stitching.

Barrel Length: About 1 7/8” as measured from the muzzle to the seam at the breechblock.

Sights / Optics: The front sight is a dovetail set silver blade. The rear sight is a “V” notch at the rear of the breechblock.

Stock Configuration & Condition: The one piece stock is walnut with checkering on parts of the bird’s head butt. There are handling marks and a few mars on the checkering. There are some compression marks surrounding the trigger pivot pin. The stock rates in about Fine overall condition for an antique.

Bore Condition: The bore is brown and the rifling is sharp. There is no erosion in the bore.

Overall Condition: This handgun retains about 25% of its metal finish, not counting the silver mountings. The lockplate, hammer and trigger should have been case-colored originally, but have muted to the point that they now appear as gray patina. The top tang and breechblock also appear as gray patina. The barrel has thinned considerably on the top, but the portion of the underside protected by the stock still retains some of the original browning. The screw heads are surprisingly sharp, yet clearly show signs of a screwdriver. The top tang and sideplate screw heads are engraved, the small lockplate and rear trigger guard wood screws are not. The markings are clear except as described. Overall, this handgun rates in about Fine condition for an antique.

Mechanics: The action functions correctly. The barrel is rifled with seven grooves. The screw joining the barrel and breechblock can be seen by looking through the bore. We did not fire this handgun.

Our Assessment: We believe this to be a real Deringer, made by Henry Deringer of Philadelphia. Perhaps the most famous of Deringer’s pistols is the one used by John Wilkes Booth to assassinate President Abraham Lincoln, but his deringers were already famous before then and spawned many imitators. We encourage potential bidders to read the chapter titled “Percussion Deringers (Henry Deringer and His Imitators)” in Norm Flayderman’s “Guide to Antique American Firearms”. This handgun has survived in Fine condition, showing handling and some compression marks throughout, but having avoided attempts to overly clean or refinish it from the original. It has an approximate 5 ½” overall length with the barrel measuring about 1 7/8” as measured from the muzzle to the seam at the breechblock. It has the appropriate seven groove rifling, screw secured barrel/breechblock connection and markings. This is a great chance to own a handgun so historic it literally changed the American language.