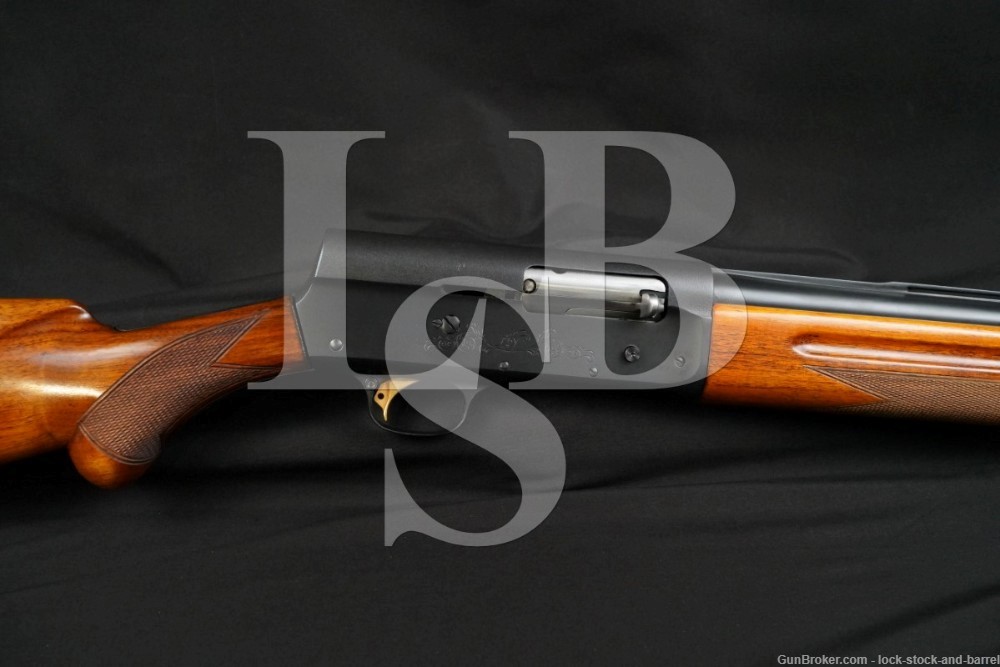 Markings: The left side of the barrel is marked “BROWNING ARMS COMPANY ST LOUIS MO / * SPECIAL STEEL – 16 GAUGE – SHELLS 2 3/4″” and at the rear with Remington inspector marks, the right has an inspector mark and “KL” date code. The left of the receiver is marked “BROWNING / TRADE MARK” with a bust portrait. The receiver has tasteful scroll engraving. The serial number “A11061” is marked on the bottom of the barrel lug, the left of the receiver, and the left of each tang.

Stock Configuration & Condition: The stocks are two-piece checkered walnut with finger-grooved forend, round-bottom pistol grip, straight comb and ventilated black rubber Pachmayr recoil pad. The wrist has had shims installed at the front edge and there is a repaired chip-loss to the left of the top tang. There are some scattered light nicks along the belly and comb with one notable nick in the bottom of the forend at the rear of the checkering. The checkering is generally sharp. The LOP measures 14 1/4″ from the front of the trigger to the back of the buttplate, 13 1/4″ to the back of the wood. The plate has scattered light wear. Overall, the stocks are in Very Good-Fine condition as refinished and repaired.

Overall Condition: This shotgun retains about 97% of its metal finish. The finish is strong throughout with only a few scattered minor marks and infrequent spots of minor oxidation, most notable on the right receiver flat near the front. The action shows minor operational wear. The screw heads range from sharp to tool marked with strong slots. The markings are clear. Overall, this shotgun rates in Fine condition.

Our Assessment: It is not everyday you get a chance to see an American Browning Auto 5. According to the Blue Book, roughly 63,000 were made between 1940-1947. These guns were made for Browning by Remington during German occupation of Belgium in WWII. A lot of people forget that the United States did not want any part with the war in Europe, and we didn’t even start providing military arms to help our allies until 1941 with the lend lease program, not officially joining the effort until after Pearl Harbor. Modern sporting arms manufactured during the war years are growing in collectability and becoming more sought after. This 16 gauge example is in Fine condition, appearing to have seen little use, though its stock has been repaired and refinished. It has been equipped with a recoil pad and the friction rings allow for adjustment, so it should be a soft shooter if you’d like to take it out in the field. It’s also a nice addition to a collection with all of the various Browning long-recoil guns. Please see our photos and good luck!