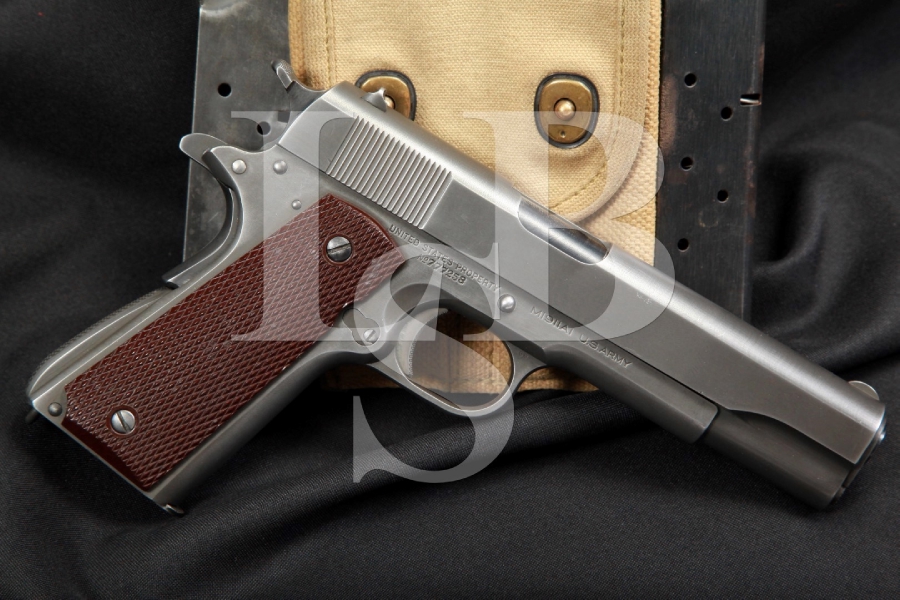 Stock Configuration & Condition: The grips are checkered reddish brown plastic. The checkering in the left grip is sharp with a minor mar in the center of the grip. The checkering on the right grip is sharp with light wear along the front of the grip and moderate wear along the bottom edge. There is a light mar in the upper front corner, another just below it and a larger mar in the center of the grip. There are neither chips nor cracks. The grips rate in about Fine overall condition.

Type of Finish: The finish is Parkerized. The mainspring housing is checkered.

Bore Condition: The bore is dark and the rifling shows light wear. There is light erosion in the grooves the length of the barrel.

Overall Condition: This pistol retains about 50% of its metal finish. All surfaces show thinning in the finish. The slide shows a few light marks with a few small compression marks on the right side, a mark through the finish in front of the port and a compression mark in the bottom right edge near the front of the frame. There is a very light mark near the bottom of the grip safety. The checkering on the mainspring housing and hammer shows moderate wear. The slide release, magazine release and recoil spring plug checkering is sharp except for their outside row, which shows moderate wear. The slide serrations are sharp with a faint mark in one of the ridges on the left side. The lower right grip screw is distressed and the markings are clear. Overall, this pistol rates in about Very Good condition.

Mechanics: The trigger pull is crisp. The slide is tight on the frame. The action functions correctly. We have not fired this pistol.

Our Assessment: > The 1911 and 1911-A1 pistols served the military of the United States from 1911 to 1985, through both World Wars and the Korean and Vietnam wars. They gained a reputation as a reliable handgun with plenty of stopping power, and are held in high regard by those who have used them. This is a WWII manufactured 1911A1 pistol made by Colt. It is in about Very Good condition with about 50% of its original Parkerized finish remaining. The bore is dark with light erosion in the grooves. The pistol is marked correctly, and the slide is numbered to the frame. This pistol comes with a total of three magazines, one from WWI and two from WWII and a WWI olive drab double magazine pouch with a 1918 date. This package is a great find for the Colt collector or collector of WWI and WWII weaponry. It is always nice to see an old gun that has obviously been shot a lot but has also been cared for well. The thinning is even, with only a few handling marks, and no signs of erosion.