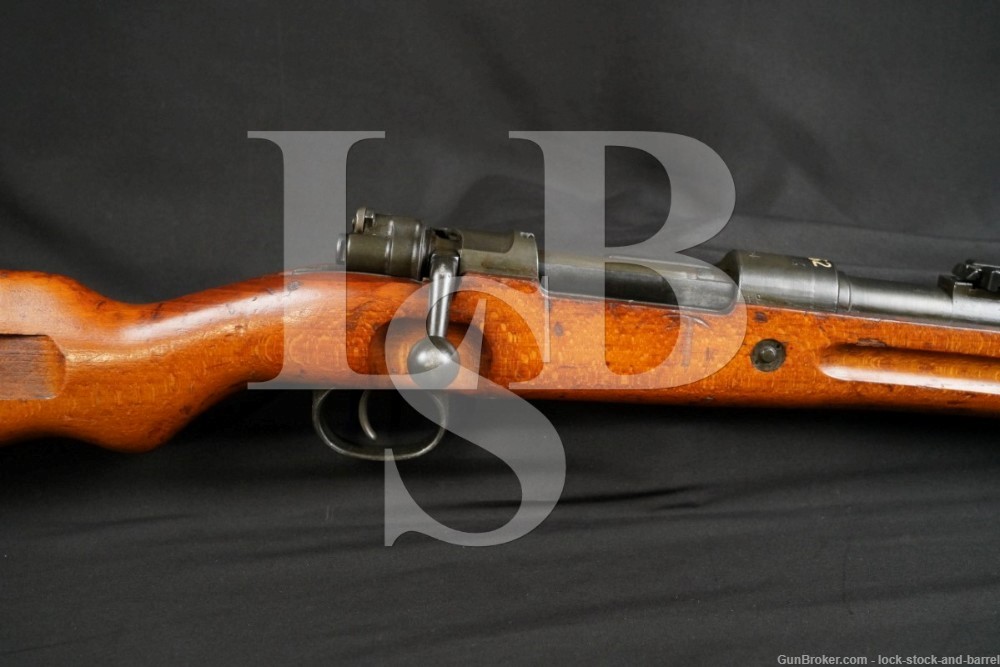 Make: Steyr, Austria. In 1944 “bnz” was the wartime code for Steyr-Daimler-Puch AG.
This Mauser later served for Israel.

Sights / Optics: The front sight is an inverted “V” post set atop a ramped base and under a protective hood. The rear sight is a “V” notched blade attached to a sliding sight escalator marked from “1-20”.

Stock Configuration & Condition: The wood stock has a pistol grip, scallop for the bolt handle, finger grooves, nosecap with bayonet lug, hole for the missing cleaning rod, barrel band with sling bar, through bolt, sling well, sling pass through and a metal buttplate. The wood shows numerous scrapes, scratches, and compression marks. Several of these marks have damaged small areas of  the surface wood. The LOP measures 13 1/4 inches from the front of the trigger to the back of the buttplate. The stock rates in about Very Good condition.

Overall Condition: This rifle retains about 96% of its metal finish as refinished. Scratches, tool marks and areas of surface erosion show through the new finish. The metal shows scrapes, small scratches and areas of discoloration. Some of the screw heads show heavy use. Most of the markings are deep. Some of the small marksing have faded. Overall, this rifle rates in about to Very Good Plus condition as refinished.

Mechanics: The action functions correctly. As with all used firearms, a thorough cleaning may be necessary to meet your maintenance requirements.

Our Assessment: This marked German K98 Mauser was made by Steyr back in 1944 when Austria was part of the Third Reich. This Mauser most likely saw action during WWII.
After WWII, Mausers found their way to Israel. In 1948 Israel declared statehood and was immediately attacked. Many countries declared an arms embargo in the Middle East, so the Israelis bought what they could to fight. This is one of the K98 rifles acquired by Israel. It still has original Geman markings on it but the “swastikas” have been removed.
In the 1950s these K98’s were converted to 7.62 NATO and became a standard for the Israelis into the 1970s. The “7.62” is marked on the receiver and stock to denote this.
For more, see pg. 168 of “Bolt Action Military Rifles of the World” by Joe Puleo.