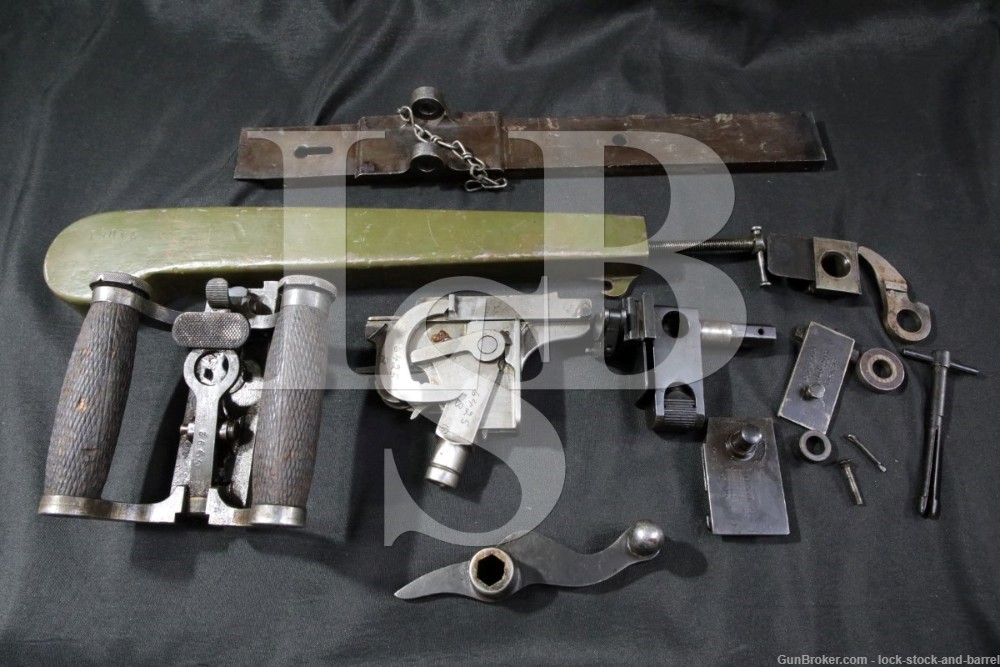 Markings: The spring box is marked “74601” and has a post-1928 Tula Arsenal marking (a star with an arrow inside). The handle block and trigger spring assembly feature the serial number “3544” and have Soviet proof marks. The included recoil plate has a Soviet proof. The crank slot filler piece has three struck out serial numbers. The roller handle has Tula proof marks and the serial number “67044”. The feed box assembly has markings which are both in cyrillic and English, the parts have been marked with the serial number “6425 / B” with the original serialization struck out (it was imported prior to the Russian Revolution). Finally, the handle block pin has a faded marking. Please note, this is not a conclusive list of every included part, only the markings we noticed on the parts when we inspected them.

Type of Finish: The spring box is painted Green.

Overall Condition: This lot of components for a Maxim Model 1910/30 have handling wear consistent with a weapon system used from 1910-1945. There is some light oxidation on some of the metal parts, some light finish loss on the spring box and some scattered cosmoline residue. The parts all appear to be in normal working order with no significant damage of note. Overall, the lot is in Very Good condition.

Mechanics: We do not have the capability to test the parts. We see nothing to indicate that the parts will malfunction when properly installed onto a Maxim M1910 machine gun.

Our Assessment: This is a lot of Maxim M1910 machine gun parts that appear to have been taken from various weapons.

Hiram Maxim was a gifted Anglo-American inventor who is credited with creating the machine gun. Maxim was a prolific inventor in the late 19th century, he installed the first electric lights in a New York City building (the Equitable Insurance Company building) and worked out technical kinks  which would be used to create the first light bulb (which Edison gladly took the credit for). He also worked on an early airplane design, but it failed to take flight. Maxim was an impressive technical mind but by the 1880s he still had not achieved a major breakthrough. He recalled late in his life how in 1882 he had received some advice from a fellow American while visiting Vienna, “Hang your chemistry and electricity! If you want to make a pile of money, invent something that will enable these Europeans to cut each others’ throats with greater facility” (https://www.nytimes.com/1985/11/26/science/100-years-of-maxim-s-killing-machine.html?sec=health&spon=&pagewanted=all). Hiram must have taken the advice to heart, three years later he had completed the world’s first practical machine gun. Maxim partnered with Englishman Edward Vickers to form “Vickers, Son & Maxim”, and they improved the design before marketing it to virtually to any country that would pay for it.

Maxim’s design reached the Russian Empire in 1887. Tsar Alexander III personally fired the novel weapon and was impressed. The Russian military initially wanted a variant of the design that would chamber the Berdan cartridge, but the Berdan Rifle was withdrawn from service during the trials. Ultimately, the machine gun was chambered in 7.62x54R the same cartridge used on the new standard issue rifle adopted by the Russian military, the Mosin Three-Line Rifle. Only a small number of the new machine guns were in service with the Russian military when it was humiliated during the Russo-Japanese War in 1905, following the defeat the Russian Military strove to rapidly modernize its capabilities. In 1910 an improved version of the machine gun was introduced, and large numbers pressed into service during WWI, the Russian Civil War and several other conflicts. Ultimately, in 1930 the Soviet military moved to upgrade its aged arsenal, the Maxim machine gun and Mosin Model 1891 were among the weapon systems that were adjusted. The upgraded variant of the Maxim was designated the Model 1910/30 and would remain in service with the Red Army until the end of WWII. After the war more modern weapons systems were introduced and the hardy but archaic Maxim was retired.

The parts have some handling wear but they remain well preserved for an older weapon system. This is a set of parts that Maxim owners will not want to miss out on!