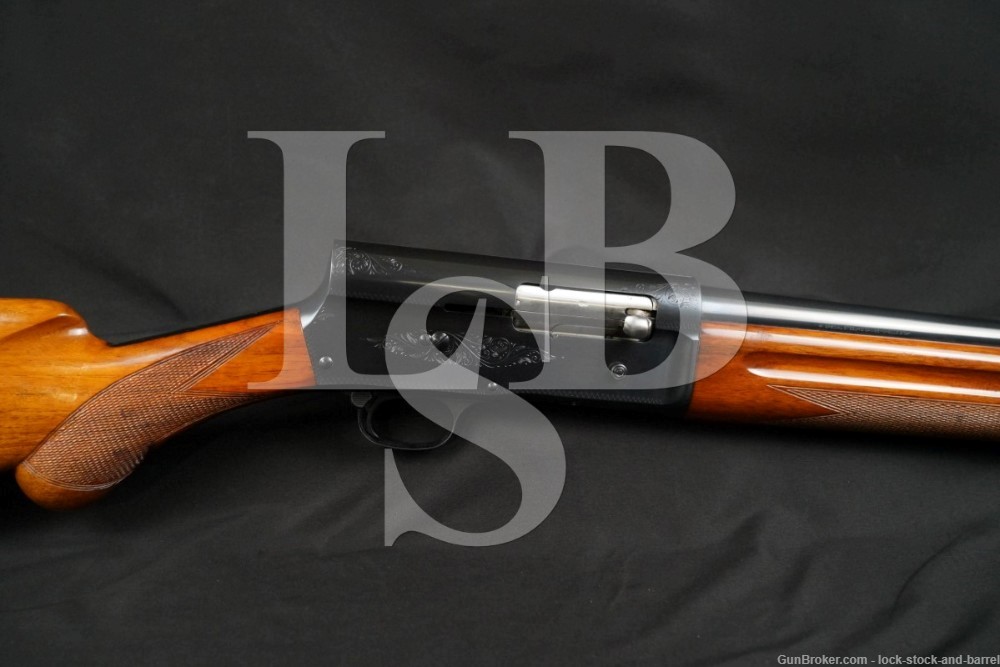 Sights / Optics: The front sight is bead mounted to a base at the front of the barrel. The rear sight is a flat surface which covers the length of the receiver, checkered to reduce glare.

Stock Configuration & Condition: The stocks are a two-piece checkered walnut set with finger grooves on the forend, round bottom pistol grip, straight comb and ventilated brown rubber Pachmayr recoil pad.  The stocks have some scattered minor nicks, scuffs and scratches with a couple of more notable dings at the top of the forend on the left and at the toe. There is a very thin crack at the bottom-rear edge of the forend. There are no chips. The checkering is well defined. The LOP measures 14 1/2” from the front of the trigger to the back of the recoil pad, 13 1/2″ to the back of the wood. The pad has minor wear, mostly around the edges, but has remained fairly supple. Overall, the stocks are in about Very Good condition and would rate Fine but for the crack in the forend.

Bore Condition: The bore is mostly bright. There is some minor erosion in the muzzle end of the bore.

Overall Condition: This shotgun retains about 96% of its metal finish. The finish is generally strong throughout with most of the balance in patches of solid erosion on the barrel at the muzzle-end, mostly on the top and left side. Otherwise, there are only a few scattered minor marks and light operational wear. The screw heads are sharp. The markings are clear. Overall, this shotgun is in Very Good-Fine condition.

Browning would eventually license the design to FN in Europe and later to Remington for their Model 11 and to Savage Arms for their Models 720 and 755. These designs went on to be a great commercial success, the first truly successful autoloading shotgun. This Auto-5 was built by FN in 1963 with Grade I engraving on the receiver and tangs. It is chambered for 12 GA. 2 ¾” shells and has a 29 1/2″ barrel choked Full. The gun appears to have been well cared for apart from some erosion on the barrel at the muzzle-end, in Very Good-Fine condition despite being nearly 60 years old. This should still make for a great hunting gun for the lucky winner but would also make a neat addition for collectors. Please see our photos and good luck!