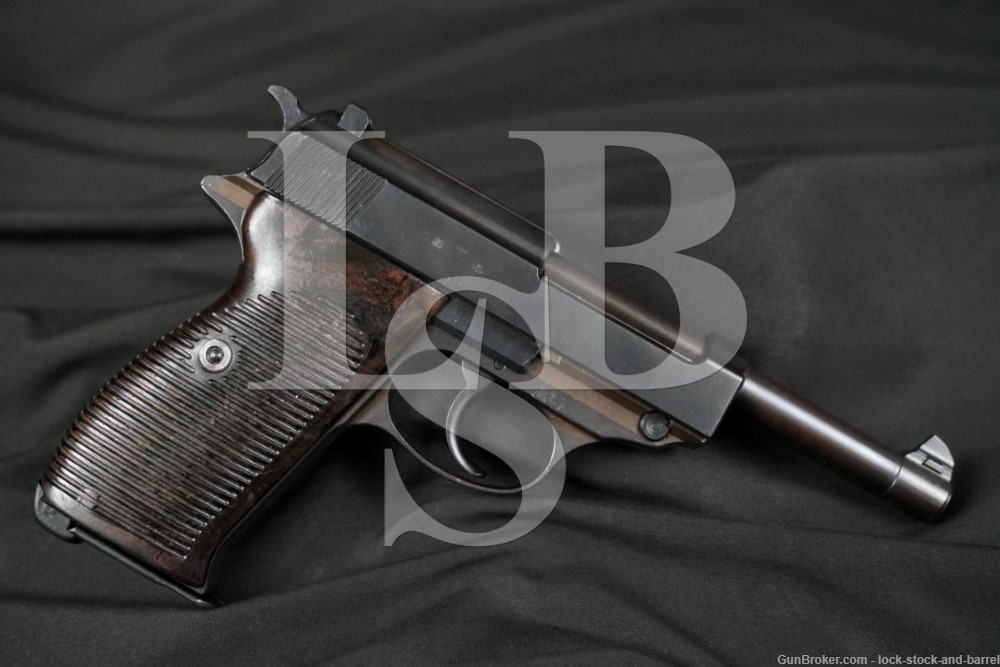 Stock Configuration & Condition/ Grip: The grip consists of two-piece serrated black and brown marble pattern synthetic panels with a thumb rest on the left panel. The panels have some light-moderate handling marks, nicks and scuffs. Notably, six grooves are interrupted by the screw-slot on the left and right panels. There are no chips or cracks. Overall, the grip panels are in Very Good condition.

Bore Condition: The bore is semi-bright with sharp rifling. There minor pitting concentrated in the grooves.

Overall Condition: The pistol retains about 75% of its metal finish. The barrel assembly as well as the upper portion of the frame around the barrel retaining latch are coated in light surface oxidation and have taken a patina color. The slide and majority of the frame have been refinished. There are some light handling marks, nicks and scuffs on the pistol’s metal surfaces. The markings remain clear. The screwheads have some light tool-marks but they remain serviceable. Overall, the pistol is in Very Good condition.

Mechanics: The action functions correctly. It has a decocker safety on the left side of the slide. We did not fire this pistol. As with all used firearms, a thorough cleaning may be necessary to meet your maintenance standards.

Box Paperwork and Accessories: There is a single 8-Round magazine. The magazine is not serial matched to the pistol. It has some light handling marks but the magazine remains in Very Good condition.

The Walther Pistole 38 (P38) was designed over the course of the 1930s and accepted for use in the Heer (German Army) in 1938. The first units were manufactured in late 1939, but the pistol went into full production in 1940. Walther could not meet the Wehrmacht’s massive demand for the P38s and production was eventually divided between Walther, Mauser and Spreewerk. During the war the three manufacturers of the P38 would use codes to identify where the gun was made: “ac” identified Walther, “byf” identified Mauser and “cyq” identified Spreewerk. This was done to conceal where production of German armaments was being performed, an especially pressing concern in the later phases of the war when Allied bombers reguarly targeted German production facilites (although the bombing failed to disrupt German production which reached its peak in 1944). The P38 saw extensive use by the German military during the war with far more issued then the more famous Luger.

This particular P38 is an interesting specimen. It was put together from components taken from four different guns. The barrel and its locking block are serial matched and were manufactured by Mauser. The slide and frame were made by Walther but are not serial matched. The magazine was also taken from a different gun and is not serial matched. We can not confirm when this was done or by whom, although it was not an uncommon practice among importers. Based on the Waffenamt on the frame it is safe to assume the gun was made between 1941-1945 but a more precise date is difficult to ascertain considering that the frame is from a different gun than the slide. This gun has some light handling wear but it retains the impressive aesthetic associated with German weapons and mechanically the pistol is sound. This is a WWII-era Wehrmacht handgun that you do not want to miss out on!