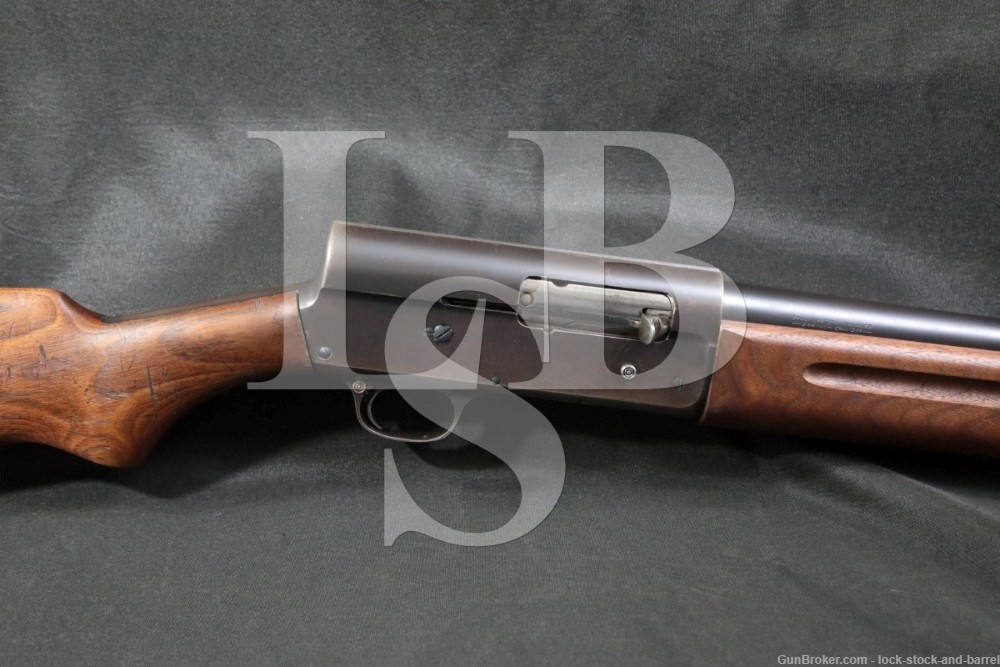 Sights / Optics: The front sight is a gold-colored bead fixed to the front of the barrel. The top of the receiver is serrated to reduce glare and provide a sighting plane.

Stock Configuration & Condition: The stocks are two-piece smooth walnut with a finger-grooved forend, pistol grip, straight comb, and serrated black hard rubber buttplate. The forend has no notable wear or damage, only light handling marks. The forend is a replacement. The buttstock has some scattered nicks, dings, scuffs and scratches with a few thin cracks at the left-front edge of the wrist. The LOP measures approximately 14″ from the front of the trigger to the rear of the buttplate. The plate has scattered light wear with well defined serrations. The stocks rate in Very Good condition as partially not original to the gun.

Bore Condition: The bore is mostly bright. There is some minor oxidation at the muzzle-end as well as some wear from dressing the bead.

Overall Condition: This shotgun retains about 87% of its metal finish. The finish is thinning at all edges. The barrel has generally strong finish with a few nicks and scuffs along the top which have discolored with oxidation. There is a thin ring around the muzzle, likely from the cutting process. The receiver has scattered minor wear, also showing some discoloration. The receiver has a few scattered light nicks and scratches with a cluster of more notable marks in the bottom tang. There are some spots of minor surface oxidation on the bolt and lifter. The action shows light operational wear. The screw heads range from sharp to tool marked with strong slots. The markings are clear. Overall, this shotgun is in Very Good condition as modified.

Our Assessment: The Savage 720, like the Remington 11 and Sportsman, was a U.S. produced copy of the Browning/FN Auto-5 long-recoil semi-automatic shotgun. Like the Remington models, the 720 saw use by the U.S. Military during WWII in both Riot and Sporting configurations. The Riot guns would be used in security roles such as guarding bases or factories while the Sporting guns would be used for aerial gunnery training. This example is properly marked for a Military 720, but it appears to have been an aerial trainer which was cut down to Riot configuration. Given how scarce genuine 720 Riot guns are, this shotgun will still make a great addition to a collection that hasn’t managed to add one, but if the collectors do not take notice, it should still prove to be a nice recreational or defense shotgun with a story. Please see our photos and good luck!