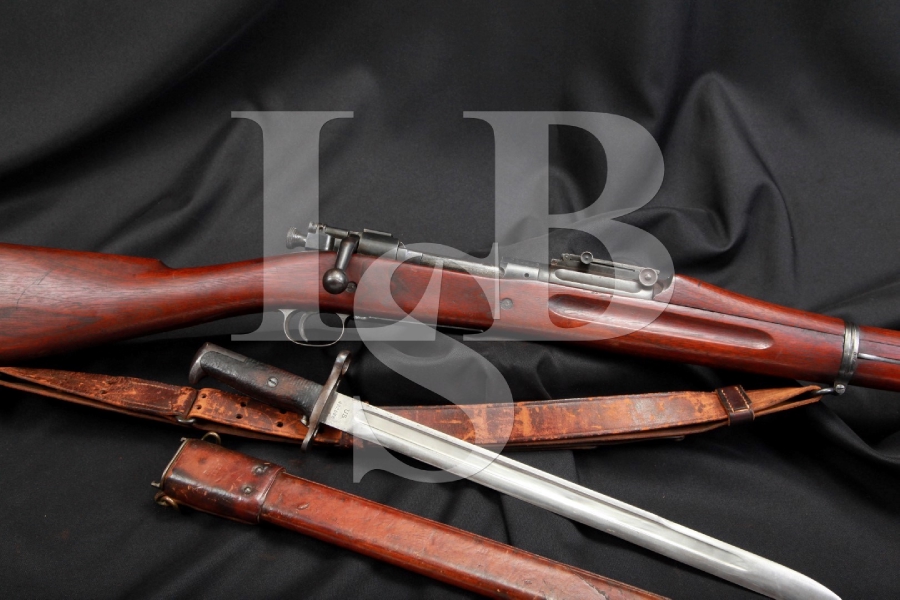 Sights / Optics: The front sight is a pinned blade. The rear sight is a “U” notched blade attached to a fully adjustable sight ladder marked from “3-27”. When flipped up separate notches and an aperture on the ladder can be used for sighting.

Stock Configuration & Condition: The two piece hardwood stock has a straight grip, metal nose cap, stacking loop, barrel band, two sling loops, two through bolts and a metal buttplate with hinged door for storage. There is a metal tube with cleaning gear in the butt. Its coating is flaking off and it is in about Good condition. There is some paint residue on the left side of the butt. The right side of the butt and the left side of the forearm are both scratched. There are various other light scrapes and marks on the wood. The LOP measures 12 7/8” from the front of the trigger to the back of the buttplate. The stock rates in about Very Good to Fine overall condition.

Bore Condition: The bore is dark. The rifling is deep. There is erosion and some pitting in the grooves. The bore shows an M.E. of 3.

Overall Condition: This rifle retains about 83% of its current metal finish. The front sight is deeply scratched from mounting the bayonet. The right side of the receiver shows some thinning, staining from surface erosion and surface erosion under the new finish. The bottom metal has a small dent; it is scratched and has a different finish than the rest of the metal. The buttplate is worn and shows some thinning. The remainder of the metal shows light scratches and some thinning. The screw heads show use. The markings are defined. Overall, this rifle rates in about Very Good condition, as refinished.

Box, Paperwork& Accessories: The rifle comes with the correct Model 1905 sword bayonet and a scabbard; see http://worldbayonets.com/Bayonet_Identification_Guide/United_States__WW_I_/us_wwi_2.html. The scabbard shown in the link is a different variation but both are correct for use with the bayonet. The bayonet blade shows scrapes and staining on the edges. The grip is worn. Both the pommel and cross piece show surface erosion and a small amount of pitting. The leather scabbard shows scrapes, scratches, compression marks and small areas where the surface of the leather has flaked off. Both the bayonet and scabbard are in about Good to Very Good condition.

Our Assessment: This Springfield Armory Model 1903 was made back in 1919. It comes with the correct bayonet and scabbard. The rifle has seen better days, but it is 95 years old. From Wikipedia: “The M1903 Springfield, formally the United States Rifle, Caliber .30-06, Model 1903, is an American clip-loaded, 5-round magazine fed, bolt-action service rifle used primarily during the first half of the 20th century. It was officially adopted as a United States military bolt-action rifle on June 19, 1903, and saw service in World War I. It was officially replaced as the standard infantry rifle by the faster-firing semi-automatic 8 round M1 Garand starting in 1937. However, the M1903 Springfield remained in service as a standard issue infantry rifle during World War II, since the U.S. entered the war without sufficient M1 rifles to arm all troops. It also remained in service as a sniper rifle during World War II, the Korean War, and even in the early stages of the Vietnam War. It remains popular as a civilian firearm, historical collector’s piece, and as a military drill rifle.“