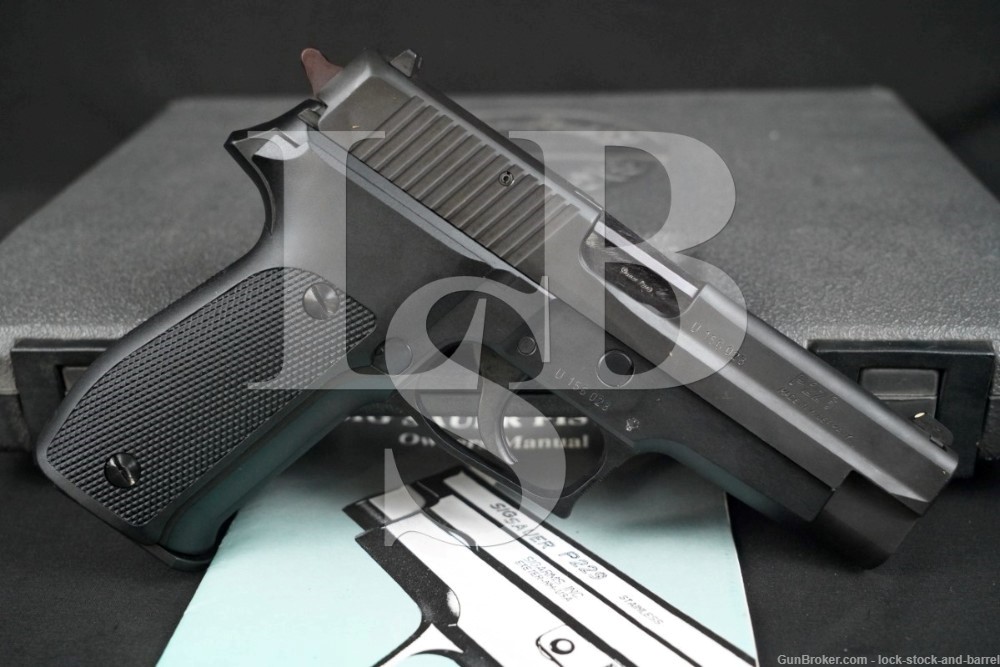 Stock Configuration & Condition/ Grip: The grip panels are two-piece checkered black synthetic. The grip panels feature checkered side panels and a checkered back-strap. The grips have some light handling marks but lack any notable defects. The checkering remains sharp. There are no chips or cracks. Overall, the grips are in Fine condition.

Bore Condition: The bore is mostly bright with sharp rifling. There is no erosion, but there is some stubborn fouling in the bore.

Overall Condition: The pistol retains 90% of its metal finish. There are some light handling marks, nicks and scuffs. Notably, there is some finish loss on the barrel from the action and some scattered light handling marks on the slide. Also the decocking lever has some stubborn fouling in its grooves. The markings remain clear. The screwheads have tool-marks, but they remain serviceable. Overall, the pistol is in Very Good condition.

Mechanics: The action functions correctly. The slide to frame fit is snug. The single-action trigger is crisp and the double-action is smooth. We did not fire this firearm. As with all used firearms, it may need a thorough cleaning to meet your maintenance standards.

Box Paperwork and Accessories: The pistol comes with a grey SIG Sauer box (the case has no serialization information on it), a user manual and a single 10-round magazine.

Our Assessment: This is a Sig Sauer manufactured P226 which is a single and double-action semi-automatic pistol chambered for 9mm Luger cartridges. The gun’s genesis begins with the P220, a pistol designed in a joint venture between Schweizerische Industrie Gesellschaft (SIG) and J.P. Sauer & Sohn GmbH. It was adopted by the Swiss military in 1975 and proved an effective service pistol. The pistol was introduced into the US commercial market by Browning and sold from 1977-1980 as the Browning BDA. As the design evolved, a number of variants were engineered, with the P226 submitted to the US Army in 1984 as it sought a replacement for the aged Colt M1911. Only the P226 and Beretta 92  completed the trials successfully. Ultimately the Beretta was cheaper to manufacture and was adopted as the M9, although the P226 was adopted for service with several elite formations including the Navy SEALs. The handgun was eventually accepted for service by a number of military and police organizations across the globe. The P226 also entered the civilian market where it has remained a popular personal defense handgun. This particular specimen has some light handling wear but it remains an impressive handgun that is mechanically sound. Good luck on your bid!