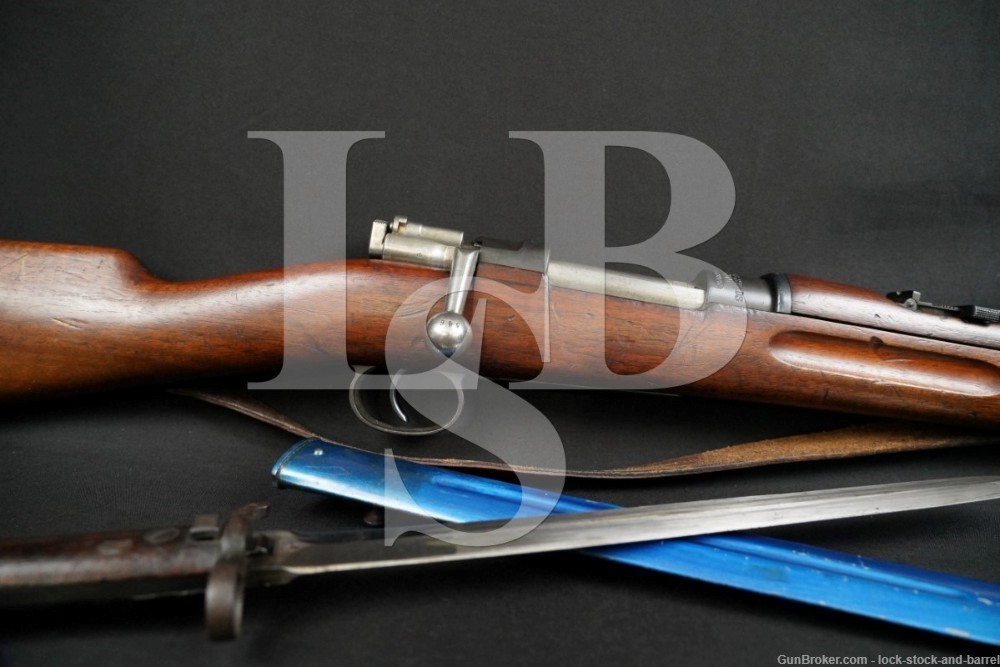 Markings: The top of the receiver is marked “crown / C / CARL GUSTAFS STADS / GEVARSFAKTORI.” and “INTERARMCO G33/50” (added by the importer). The left side of the receiver is marked with the serial number and with an “HK” inspection stamp. Most of the metal parts are marked with small Swedish “crowns” or with 3 digits numbers that do not match the serial number. The marking disk on the right side of the buttstock has been replaced with a disk that is marked “CAL / 6.5 / SWEDISH / MADE IN SWEDEN”.
The base of the Model 1894 Bayonet blade is marked with an “crown” on one side and “crown / C” on the other.

Sights / Optics: The front sight is an inverted “V” post set between two protective ears. The rear sight is a “V” notched blade in the down position. When flipped up it becomes a sight ladder that uses a second, sliding “V” notched blade. It is marked from “4-16”.

Stock Configuration & Condition: The two piece hardwood stock has a straight grip, finger grooves, nosecap with bayonet mount, barrel band with sling loop, sling well with pass through, metal marking disk on the right of the butt, two sling screws & sling tab mounted into the right sling well and a metal buttplate. The buttplate has some adhesive residue on it which should clean up. The stock hardware has been refinished. The wood shows numerous scrapes, scratches & compression marks. The LOP measures 13 1/8 inches from the front of the trigger to the back of the buttplate. The stock rates in about Very Good Plus overall condition.

Bore Condition: The lands are bright. The muzzle and grooves are semi bright. The rifling is deep. There is light intermittent erosion near the muzzle.

Overall Condition: This rifle retains about 96% of its metal finish as refinished. The metal shows scrapes, small scratches and areas of light discoloration. The bottom metal has surface erosion showing through the new finish.  The screw heads show moderate use. The markings are deep. Overall, this rifle rates in about Very Good Plus condition, as refinished.

Mechanics: The action functions. We have not fired this rifle. As with all previously owned firearms, a thorough cleaning may be necessary to meet your maintenance standards.
The bayonet mounts the rifle properly. The scabbard locks on to the bayonet properly.

Box, Paperwork & Accessories: The rifle comes with a leather sling and a Model 1894 Bayonet with locking Scabbard. The scabbard has been colorfully refinished.
Please see photos as to the condition of the listed items.

Our Assessment: This Model 1894 Swedish Mauser Carbine was imported by Interarmco. The metal has been refinished, the wood is in Very Good condition and the bore is still strong. These Swedish Mausers were renamed by the importer and many of the rifles imported had 1/2 inch extensions added to the barrel (making them 18 inch barrels) to comply with the law. This one has a 17 1/2 inch barrel without an extension and comes with a Model 1894 Bayonet with locking scabbard. Good luck.