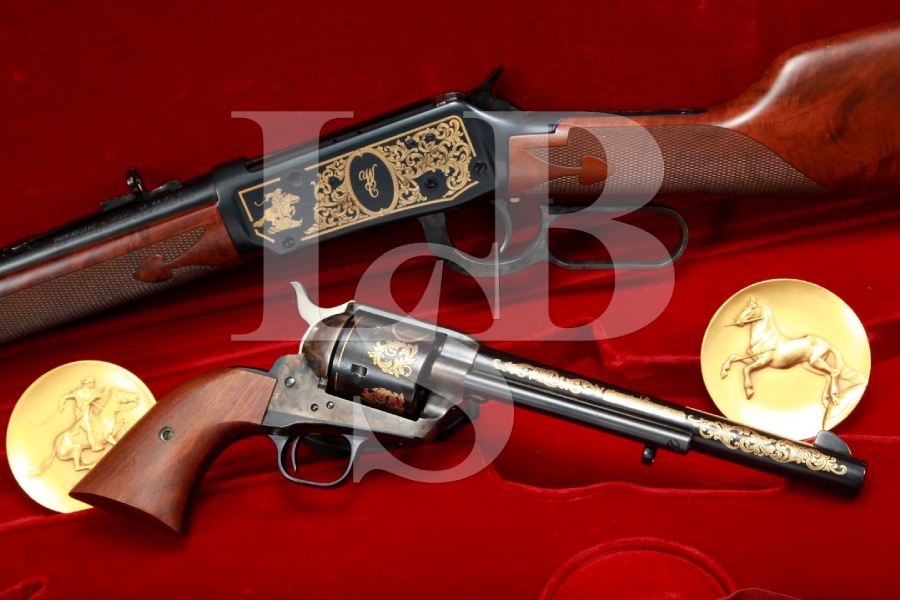 W INCHESTER: The left side of the Winchester barrel is marked “WINCHESTER – registered trademark – MODEL 94 44-40 WIN. / MADE IN NEW HAVEN CONN. U.S.A. WINCHESTER PROOF STEEL”. The top of the barrel at the receiver is marked with a circled “PW” proof. The underside of the frame is marked “18WC” and the bottom tang is marked “Mfd. by U.S. Repeating Arms Co. / Winchester TM’s licensed from / Olin Corporation”.

Sights / Optics: COLT: The SAA front sight is a blue blade with a curved front face fixed to the barrel. The rear sight is a “U” groove milled into the top strap.

WINCHESTER: The 1894 is equipped with a gold plated blade front sight pinned to a mount fixed to the barrel. The rear sight is a “U” notched full buckhorn elevator leaf adjustable for elevation dovetail set to the barrel.

WINCHESTER: The 1894 is equipped with two piece deluxe checkered straight grip stocks with a blue semi-crescent buttplate. A notable compression mark is visible on the forend tip and another is present in the underside of the forend at the receiver. Lighter marks and two marred diamonds in the checking are evident. Three deep marks in the wood are visible on the left side of the grip above the lever and a patch of damaged checkering is present on the right side near the rear. A few light marks are also evident in the butt stock. The LOP is 13 3/8” from the front of the trigger to the semi-crescent blue buttplate which has a smooth surface, exhibits only light marks and is in Excellent condition. The stocks are in Very Good condition.

Finish Originality: The finish on both firearms is all original

COLT: This handgun retains about 88% of its metal finish. Frosting, handling marks and scattered pinprick erosion is present on blue surfaces. Scattered pinprick erosion is visible in the case coloring of the frame. The hammer exhibits pinprick erosion and oxidation. A scroll pattern gold leaf engraving with a Colt logo is present on the left side of the barrel and an image of the Colt factory featuring the Colt dome is visible on the right side. There is a mark in the gold leaf on the right side of the barrel. The backstrap is adorned with a gold leaf Samuel Colt signature. The cylinder sports a scroll gold leaf engraving with a Rampant Colt logo and an Oval “W / C” logo, honoring the Winchester/Colt commemoration. There is some loss of material in the engraving on the front edge of the cylinder. Unfilled engraving in the blue finish is present around the cylinder’s front circumference. Drag marks in the finish and surface loss in the locking slots are visible. The screw heads are sharp. The markings are clear. Overall, this handgun rates in about Very Good condition.

Mechanics: COLT: The action of the SAA does not function correctly. The firing pin is absent and the hand spring has been removed, preventing the cylinder from rotating. Both are easily remedied. The pistol is built on a black powder frame and four clicks are audible when the gun is cocked. We did not fire this handgun. WINCHESTER: The action on the 1894 is stiff and appears to function properly. We did not fire this rifle.

Box, Paperwork & Accessories: This set of firearms comes in a wooden display case with a brass plaque on the lid. The protective plastic cover shows deep marks from contact with other items and seems to have fulfilled its purpose by largely protecting the plaque itself. The plaque reads “WINCHESTER / COLT / COMMEMORATIVE SET / O.F. Winchester signature, Col. Samuel Colt signature / U.S. Repeating Arms Company / Winchester trademarks licensed from Olin Corporation”. The case exhibits handling marks and marks in the wood. The interior of the case is lined red velvet and has form fit compartments for the pistol and rifle. The velvet exhibits compression marks from contact with the firearms. One accessory compartment is also present and two formed fit spots for two gold colored commemorative medallions. One medallion sports a Rampant Colt and the other displays a rider on horseback holding a Winchester rifle. The reverse sides are marked “COMMEMORATIVE” with scrollwork, an Oval “WC” logo and are stamped “18WC”. The medallions are in Excellent condition. The Case is in Good condition.

Our Assessment: In 1984, Winchester and Colt collaborated to manufacture a special commemorative set to honor their symbiotic relationship during Western Expansion. Partnering a Colt Single Action Army with a Winchester 1894 carbine in .44-40, this set was number 18 and encompasses the spirit of the West and those who were brave enough to battle the wilds to make a better life for themselves. Both the rifle and revolver are finished in blue, except for the traditional case colored frame of the Colt, and feature lovely gold leaf engraving honoring the relationship between the two classic American companies. The revolver exhibits evidence of handling, but is may be unfired. It is in Very Good condition, with the hand spring and firing pin removed to help keep the pistol’s condition from changing. The 1894 carbine also shows evidence of handling and also may have never been fired. The rifle is in Very Good condition. This commemorative set is an excellent choice for anyone who is in the beginning phases of acquiring a collection of classic American firearms worthy of display, combining two of the most famous American firearm manufacturers in history.