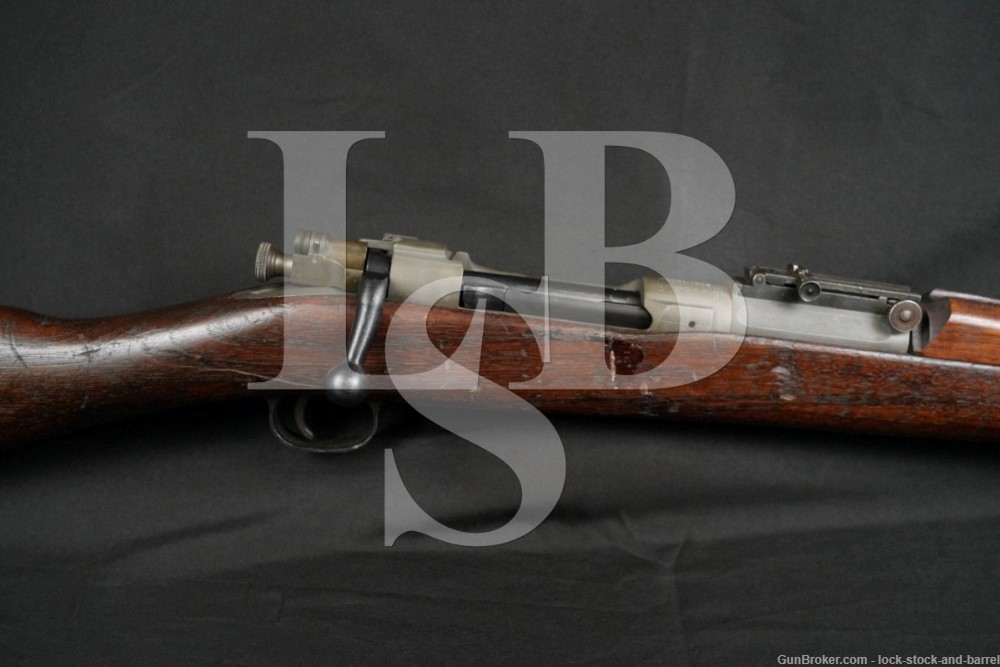 Markings: The top of the receiver is marked “U.S. / REMINGTON / MODEL 1903 / 3065119”. The top of the Sedgley replacement barrel is marked “U.S.M.C. / 1 – 44 / circled S”. This replacement barrel was originally made by the Sedgley Manufacturing Company under contract for the U.S. Marine Corps (page 164-165 of Joe Poyer’s book, The M1903 Springfield Rifle and its Variations, 3rd Edition). The safety is marked “SAFE READY” and the magazine cutoff is marked “ON OFF”.  The underside of the bolt handle and rear of the bolt assembly (twice) are marked “R” for Remington. The left side of the stock, above the trigger, is marked with “crossed cannons” cartouche and an Inspector’s stamp “FJA in a box”. The bottom of the grip is marked “2” and with a “circled P” proof. The belly of the stock is marked with small inspection stamps.

Stock Configuration & Condition: The two piece hardwood stock has a pistol grip, metal nosecap with bayonet lug, barrel band, stacking loop, 2 sling loops, 2 reinforcing pins, and a metal buttplate with hinged door for storage. The refinished buttplate has surface erosion showing through the finish. It shows scrapes and discoloration. The right side of the butt shows 3 small nail holes. The wood shows numerous scrapes & scratches and compression marks. Several have damaged or removed small portions of the surface wood. The LOP measures 13 inches from the front of the trigger to the back of the buttplate. The stock rates in about Good to Very Good overall condition.

Bore Condition: The muzzle was not covered when the rifle was refinished and is lightly coated. The lands are semi bright. The rifling is deep. There is no visible erosion. The bore shows an M.E. of -0.5 (negative 0.5).

Overall Condition: This rifle retains about 96% of its metal finish as refinished. The metal shows scuffs and light handling marks. The front of the barrel shows a few spots of discoloration from oxidation. The bottom metal scrapes, thin scratches and discoloration. The receiver and bolt show light operational wear. The screw heads show heavy use. The markings are deep. Overall, this rifle rates in about Very Good Plus condition as refinished.

This Remington Model 1903 was made during WWII. It has since been rebuilt and refinished. The barrel has been replaced. The replacement barrel was originally made by the Sedgley Manufacturing Company under contract for the U.S. Marine Corps. It is marked “U.S.M.C.” which makes it valuable to collectors. Despite being refinished it has nice deep markings on the receiver as well as on the barrel. This Remington 1903 looks impressive for its age and has a strong bore. It should do well out at the range. Good luck.