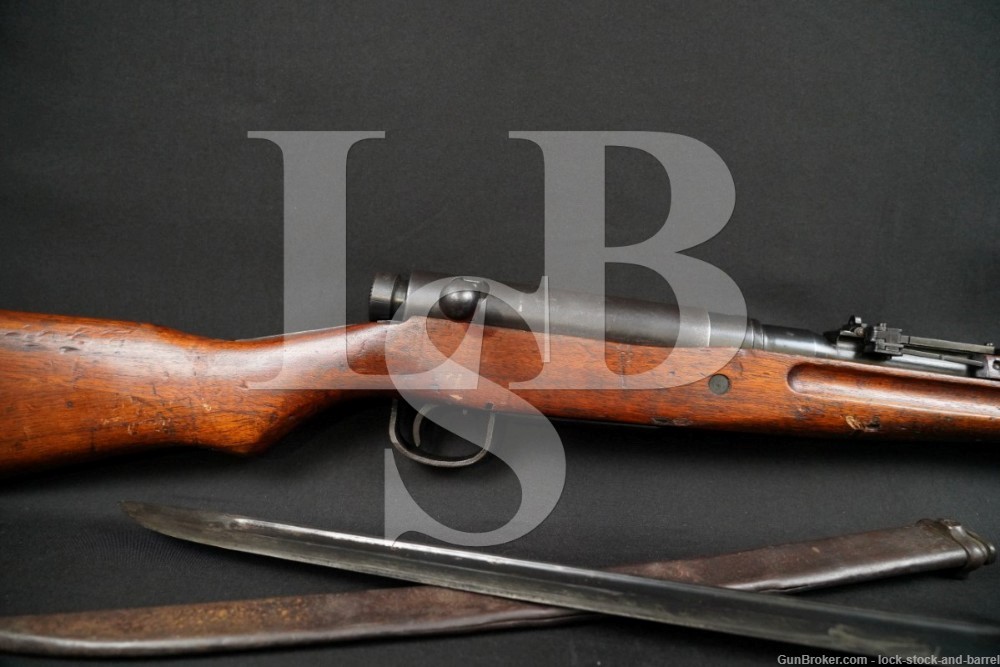 Markings: There is no visible import mark. The top of the receiver is marked with a “chrysanthemum” (the Imperial ownership seal) and with three Japanese characters that translate to “99 Type”. The left side of the receiver is marked (from left to right) with the “5th series” symbol, the serial number and with the symbol for Nagoya Arsenal. There is a line on the left of the barrel shank that matches a line on the receiver. The bottom of the bayonet lug, bottom of the safety, firing pin, extractor and the bottom of the bolt handle are all marked with the last three digits of the serial number. The rear of the dust cover is marked with a number that does not match. The rear of the safety has decorative metal work on it.
The base of the Type 30 bayonet blade is marked with the symbol for the Nagoya Arsenal. The bottom of the grip is marked  “circled 1” and “82432”.          .
For more information on the markings see pages 210 – 215 of Joe Puleo’s book, Bolt Action Military Rifles of the World.

Sights / Optics: The front sight is an inverted “V” post set between two protective ears. The rear sight ladder has a fixed aperture when down and a sliding aperture when flipped up. The ladder is marked from “3 – 15”. The sides fold out to be used as anti-aircraft sights. They are marked “2” in the middle and “3” on the ends. There are inverted “V” notches on each side of the AA sights.

Stock Configuration & Condition: The hardwood stock has a pistol grip, finger grooves, nosecap with bayonet lug, hole for the included cleaning rod, barrel band with monopod, 2 sling loops, through bolt and a metal buttplate. The buttplate shows scratches, discoloration and surface erosion. The belly of the stock shows a drain hole. The bottom of the butt shows a roughly filled repair at the bottom metal. The wood shows numerous scrapes, scratches and compression marks. Several have damaged or removed small portions of the surace wood. The LOP measures 12 5/8 inches from the front of the trigger to the back of the buttplate. The stock rates in about Good to Very Good overall condition.

Bore Condition: The grooves are semi bright and the polygonal rifling is deep. There is some intermittent erosion at the muzzle.

Overall Condition: This rifle retains about 85% of its current metal finish. The metal shows several scrapes, scratches and areas of discoloration from oxidation. The metal also shows small spots of light surface erosion; more prominent on the barrel. The bolt and receiver show operational wear. The screw heads show heavy use. The remaining markings are deep. Overall, this rifle rates in about Very Good condition.

Mechanics: The action functions correctly. We have not fired this rifle. As with all previously owned firearms, a thorough cleaning may be necessary to meet your maintenance standards.
The cleaning rod is stuck in place. It turns but does not screw in or off. The bayonet mounts the rifle properly.

Box, Paperwork & Accessories: The rifle comes with an “early” Type 30 Bayonet & Scabbard. The early bayonet cross pieces were made with a quillion (hook). The bayonet metal shows scrapes, surface erosion and discoloration from oxidation. The handle shows scratches and chips in the wood. The Bayonet is in Very Good Condition. The metal scabbard shows surface erosion, dents and a brown patina. The rear is also split. It is in Fair condition. The rifle comes with a dust cover that shows surface erosion. It is in Good condition.

Our Assessment: This Japanese Type 99 Arisaka was made by the Nagoya Arsenal between 1939 and 1943. It is over 75 years old and still looks like it can still do serious work out at the range. It has a monopod, dust cover, AA sights and matching numbers on the receiver, bayonet lug and bolt assembly parts. It also has a deep intact chrysanthemum on top of the receiver. It is very common for the Mum to be damaged or removed from Arisakas, as Mums were systematically ground off after the Japanese surrender. These weapons were also destroyed in large numbers after the Japanese surrender. This comes with an “early” Type 30 bayonet & scabbard.  It will add to your Military or WWII collection.