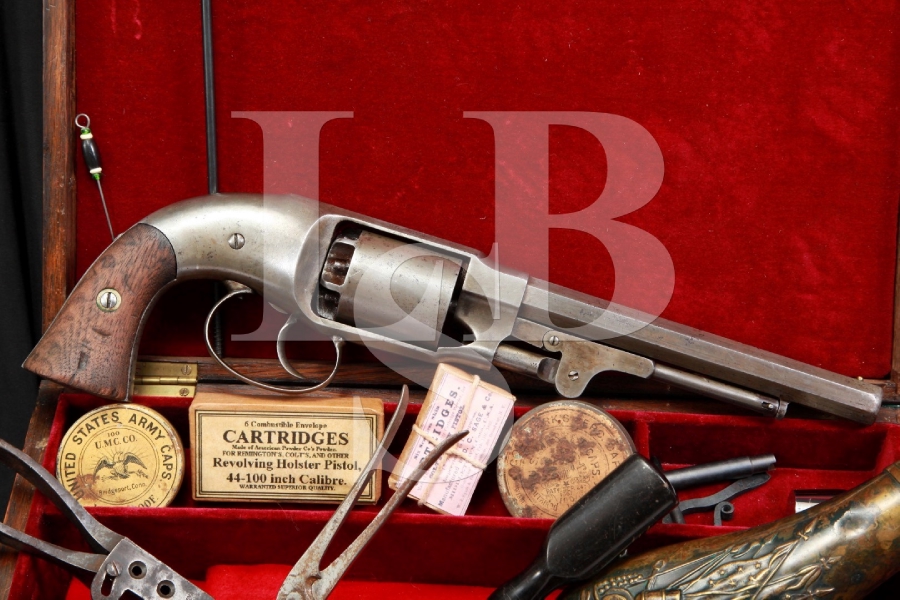 Markings: The top of the frame is marked “PETTENGILL’S / PATENT 1856” and “RAYOND & ROBITAILLE / PATENTED 1858”. The barrel and frame display a “WP” proof mark. The cylinder is marked “PP”. The butt is marked “2999”. The butt is also marked “w” on each of the wood grips. This gun has been polished and grips sanded at some point in its life. We believe the cartoche on the grips and the proof on the loading lever / cylinder arbor may have been sanded off at that time. The inside of the trigger guard is marked “2999” as well.

Sights / Optics: The front sight is a brass bead fixed to the barrel. The rear sight is a “U” groove milled in the top strap.

Stock Configuration & Condition: The two piece oiled walnut grips are flared at the butt and feature brass escutcheons. Handling marks and compression marks are visible with two deep marks on the right panel. The grips rate in about Good overall condition.

Bore Condition: The bore is rough and the rifling is sharp. There is erosion in the bore.

Overall Condition: This handgun retains about 10% of its metal finish. The barrel and frame exhibit a smattering of original finish along with pinprick erosion, handling marks and scattered spots of surface erosion. The right side of the muzzle is rounded from time spent in a holster. The edges of the barrel flats are sharp. The screw heads are mildly deformed and the grip screw head is moderately deformed. All screw heads are serviceable. The markings are shallow. Overall, this handgun rates in about Good condition.

Box, Paperwork & Accessories: The pistol comes in a stained wooden display case with edge trim and a small brass plaque on the lid. The exterior of the case exhibits handling marks and scattered marks through the finish. A corner of the trim on the left end of the lid is loose. The finish is inconsistent and looks like the case has been restored. The interior of the case is covered in purple velvet which exhibits wear and compression marks from contact with the items contained. The floor of the compartment fitted to the pistol is covered in red felt which is glued to the original velvet. The box is in Good condition. A two cavity mold, able to produce one Minnie ball and one round ball is contained in the case. The mold is marked “COLT’S PATENT” on the sprue cutter, exhibits handling marks, erosion and surface loss and is in Good condition. A single cavity round ball mold in-the-white which is marked “65” is included, exhibits handling marks and is in Good condition. The box contains two reproduction cartridge packages in good condition. One feels empty and the smaller contains unknown filler. We did not open the packages. A steel 2 3/8” cap box with a Winchester label is included which shows a gray patina, moisture damage and erosion. The box is in Fair condition. A 2” steel UMC cap box is also included, in Fair condition. A large screwdriver, a small screwdriver, a cleaning rod, a nipple pick and a nipple wrench are present, all in Very Good condition. A chrome oil well is included in Fine condition. Also present is a powder flask with a flags, rifles and cannon motif is included, which exhibits a dent and surface loss on the body with the brass fitting exhibiting a natural patina. The flask possesses strap ringlets and has a spring released spout which would be more appropriate to a muzzle loading rifle than a pistol. The accessories and box are part of a display and are not necessarily period correct or authentic.

Our Assessment: In 1859 Rogers & Spencer started to produce Pettengill Revolvers based on the Raymond and Robitaille improvements on the original patent. After the original test guns were praised for their accuracy and quality, but criticized for their long trigger pull and propensity to foul, Rogers and Spencer quickly made changes and fulfilled an Army order for 2000 pistols with an 85% success rate in 1863. The Pettengill proved difficult to produce and did not become favored by the Army, so Rogers and Spencer moved on to develop the more traditional single action pistol and ultimately the Spencer rifle. In the time when Colt Single Action pistols were the state of the art, a hammerless double action revolver would have been revolutionary. The original order from the Ordnance Department called for 5,000 of these pistols to be manufactured. That order was cancelled and only 2,000 of these pistols were called for. Interestingly, existing serial numbers range from 1600-4600. This would indicate that some 3,000 of these pistols were produced. In our opinion, due to the delicate internal mechanism, not all the revolvers manufactured passed the initial inspection at the factory before delivery. This would explain to span of serial numbers. We can’t explain why you find Ordnance marked revolvers in the 4300 range exactly, but they exist. This an uncommon example of a step in the evolution of the double action revolver, in a very nice display case surrounded by visually interesting, period appearing accessories.