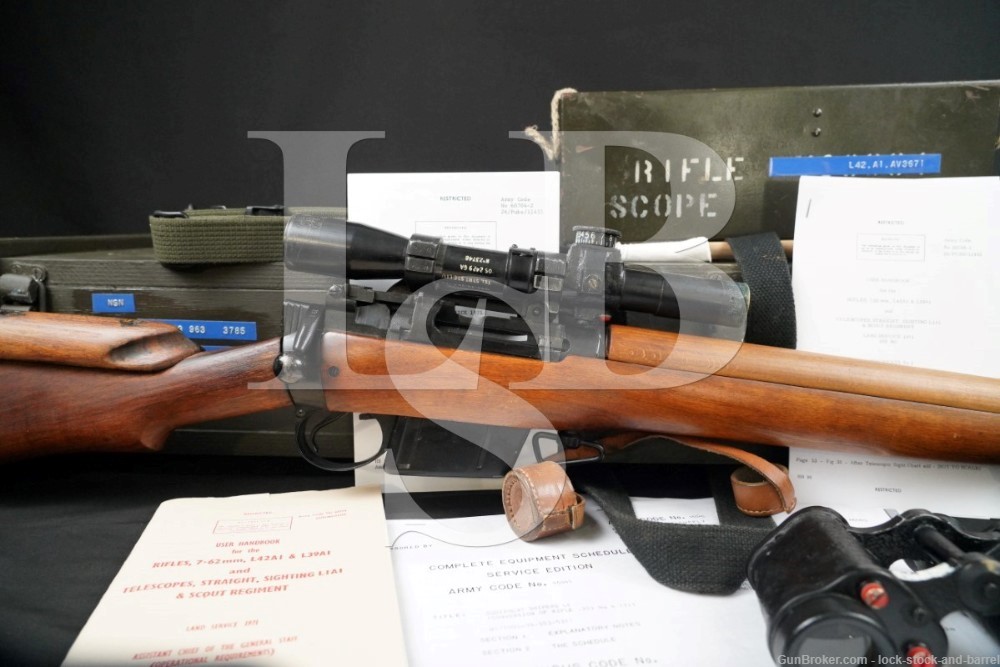 Year of Manufacture: ATF MODERN
Originally manufactured in 1943. Converted in 1972.

Markings: The import mark iis on the bottom of the barrel at the forearm. It is in small text and partially stuck. It is illegible but should read “GEMCO, PRINCETON NJ”. The left side of the stock collar is marked “M47C” (the code for BSA Shirley), “1943”, with the serial number, and “TR” (the final inspection proof prior to being upgraded to a No4 MkI (T) sniper by Holland & Holland). The left side of the receiver is marked with the new designation “L42A1.”, “D72.” for 1972 and “T” (signifying a No.32 telescope had been fitted to the rifle when it was a No.4 Mk. I, and the combination had met all inspections). The rear of the receiver is marked with inspection stamps. The rear of the bolt handle and bottom of the magazine are marked with the serial number. The bolt handle and bolt head are each marked “19T” and with “crossed flags”. The bottom of the grip is marked with faded stampings. The top of the grip is marked with the scopes serial number “23748” and with “crossed out numbers” from a scope that had been previously paired to the rifle. The top rear of the butt is marked “N”. The underside of the forearm is marked “A / 800”. The right side of the magazine is marked “CR 141A 65D”. There are a few other small markings on the rifle. The rifle still has hang tags from the Donnington Small Arms Arsenal.
The No.32 scope’s markings include “crossed out markings”, AK 7 S / 1945” and “TEL STRT.SCTLIA / OS 2429 GA / No23748”. The side of the scope mount is marked with the rifle’s serial number. The scope base and rings are marked with matching assembly numbers, “G99 / G99” & “G100 / G100”. The refurbished metal scope case is marked “RIFLE SCOPE”, with faded markings and with tape that lists the rifle’s serial number and the scope’s serial number. The interior of the metal scope case is marked with previous rifle & scope information.
The markings on the rear of the binoculars include “BINO PRISM No2MK3 / X6 / No236598”.
The sling markings include “SLING SMALL ARMS RIFLE L8 A1”.
The front & back of the wood chest each have an “AIR CARGO LABEL” applied. One end of the case has a “barcode” sticker on it. The case is marked with tape (between the latches) that lists the rifle & scope serial numbers as well as other identifying information. The underside of the top door has a sticker attached. Its markings include “EQUIPMENT, L1 A1 (CR 185A)”.

Sights / Optics: The front sight is a blade set atop a small ramped base and between two protective ears. The rear flip up sight ladder normally uses a fixed aperture in the down position. The aperture was removed inorder to mount the scope. The ladder is marked from “2 – 13”.
The left side of the receiver has two threaded holes for accepting the scope mount that is attached to the scope. The scope is attached to a one piece mount with two rings. The mounting screws have oversized heads and are attached to the mount. The small screw heads show heavy use. The mount shows scrapes, small scratches and areas of discoloration. Overall the mount is in about Very Good Plus condition.
The No. 32 scope was rebuilt and recalibrated for 7.62 NATO. It has been set for Meter distances. The top adjustment knob is marked “M” for meters. The scope is a fixed 3 power with a post reticle. The view appears clear with the exception of a small black fleck on the upper left edge of the view and a smaller black fleck along the horizontal line. The adjustment knobs turn. The scope tube shows scrapes and scratches. Some have removed areas of the paint finish. Some of the exposed metal shows discoloration from oxidation. The scope is in Very Good Plus condition.

Stock Configuration & Condition: The hardwood stock has a straight grip with finger groove, raised cheek piece, barrel band, 2 sling loops and a brass buttplate with hinged door for storage. The barrel is free floated so there is a gap between the barrel & wood at the nose. The buttplate shows small scratches and light discoloration from oxidation. The raised cheek piece is secured by two screws. The wood shows several scrapes, scratches and compression marks. Most of the marks are light but some have damaged small areas of the surface wood. The LOP measures 13 ¼ inches from the front of the trigger to the back of the buttplate. The stock rates in about Very Good Plus overall condition.

Bore Condition: The bore is bright and the rifling is deep. There is no erosion. The bore shows an M.E. of -1.5 (negative 1.5).

Overall Condition: This rifle retains about 96% of its current metal finish. The metal shows scuffs,  small scrapes and handling marks. The barrel & front sight also shows scratches. The bolt handle knob shows scrapes & thinning. The screw heads show use. The markings are deep. Overall, this rifle rates in about Very Good Plus to Fine condition as refinished.

Box, Paperwork & Accessories: The rifle comes with a refurbished No. 32 scope assembly; see above. The scope comes in a metal case and with leather lens covers. The case shows several scrapes & scratches as well as a few shallow dents. Many of the scrapes have removed areas of the paint finish. The exposed metal shows discoloration from oxidation. The interior of the metal case securely holds the scope assembly which screws to the threaded metal posts. The refurbished case is in about Very Good condition. The lens cover shows discoloration and creasing. On end shows a repair where the attachment strap has come loose. It is in Very Good condition.
The included binoculars show scrapes & scratches. The right lens uses a reticle made of several evenly spaced vertical lines. The right lens view is dim & cloudy and there are several small gray/black flecks in the view. The left lens view appears clear but is slightly dim. The binoculars are in Good condition.
The rifle comes with a 10-round magazine that shows scrapes, a few thin scratches and small areas of thinning. There are small areas of the paint finish which are bubbling due to loss of adhesion to the metal. It is in about Very Good Plus condition.
The included green canvas sling is in Excellent condition.
The rifle comes with a “USER HANDBOOK” for the rifle & scope. It is in Fine condition. Copies of manuals & spect sheets related to the rifle are also included.
The rifle and accessories are stored in a wooden transit case. The case uses lockable metal latches, metal hinges and canvas carrying straps. The exterior shows several scrapes & scratches. The interior uses small sections of felt & padding to protect the contents. It uses leather straps to hold the lid open. It also uses rotating pieces of wood to secure items. The transit case is in Very Good Plus condition.

Our Assessment: This Enfield L42A1 Sniper Rifle was built back in 1972. It is a rebuilt Enfield No.4 Mk1 (T) Sniper Rifle so it has markings consistent with a No.4 Mk1 (T) Sniper.
The rifle started life as a standard Enfield No.4 MkI made at BSA Shirley back in 1943. It was selected for its inherent accuracy and then upgraded to sniper configuration by Holland & Holland. It was eventually paired with a sniper scope and put to good use. The Holland & Holland mark and the scope pairing mark are still clearly visible on the rifle.
The L42A1 is an upgraded version of the No. 4 MkI (T) Sniper Rifle that fires the 7.62 NATO cartridge. It was introduced in 1970 and was used by the British Military until 1992. The rifle’s main upgrade was the free floated 27 1/2 inch heavy barrel. The original WWII No. 32 scope was rebuilt & recalibrated for use with the 7.62 NATO round.
About half of the approximately 900 rifles made were condemned and destroyed in the post-service years by the British Ministry of Defense. These are scarce rifles. This one is in nice shape with a strong & bright bore and great markings. The markings include the rifle’s serial number on the receiver, bolt, magazine and scope mount. The scope is also matched to the rifle. The rifle comes in its wooden transit case and with accessories. Please see our photos. This is a Nice package for an Enfield collector. Good luck.