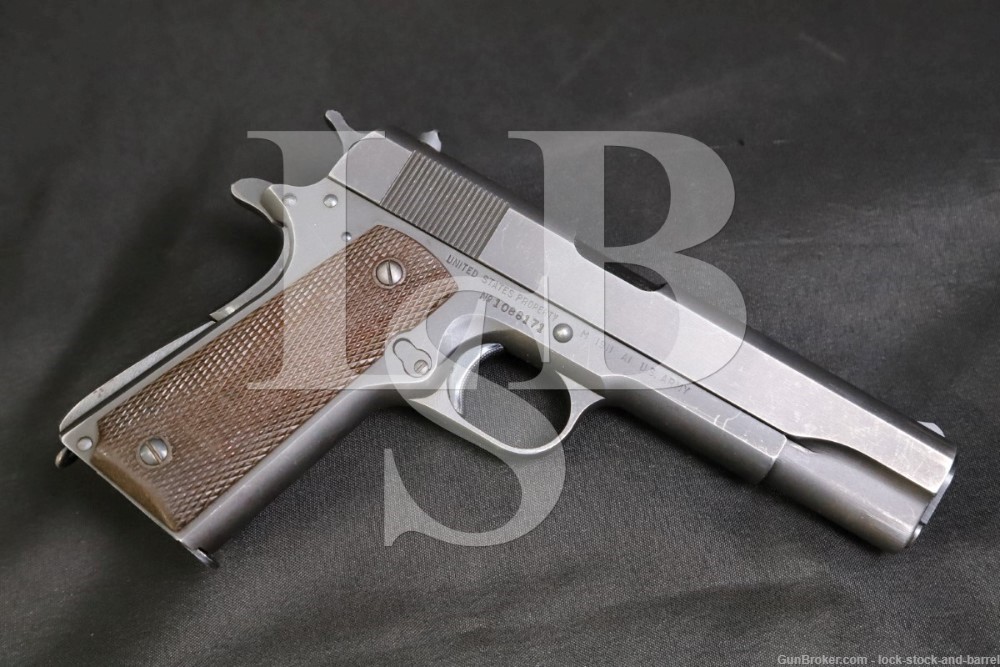 Finish Originality: The overall appearance of the finish is Original. There is discoloration at the slide-stop notch on the left of the slide consistent with spot-hardening which was performed at this location as part of the normal production process. While some discoloration from this hardening process is normal, this is one of the more noticeable examples we have seen. Please see our photos.

Overall Condition: This pistol retains about 90% of its metal finish. The finish is thinning at all edges. There are scattered light nicks, scratches and scuffs. The grip areas show handling wear and a few spots of light surface oxidation. As noted above, there is some discoloration at the slide stop notch on the left of the slide. There is some light finish wear on the trigger guard at the bottom-front. There is a light scratch under the slide stop from disassembly/reassembly. The action shows operational wear. The screw heads range from sharp to lightly tool marked with strong slots. The markings are clear. Overall, this pistol is in about Very Good-plus condition.

Box, Paperwork & Accessories: This pistol comes with a single 7-round MS Little magazine. The magazine has light operational wear and infrequent minor surface oxidation with intact feed lips and a strong spring.

Our Assessment: The 1911 and 1911-A1 pistols served the military of the United States from 1911 to 1985, through two World Wars and the Korean and Vietnam wars. They gained a reputation as a reliable handgun with plenty of stopping power, and are held in high regard by those who have used them. As in the Great War, production demands of WWII required many manufacturers to produce military equipment for the war effort. While much of the small arms production was performed by arms manufacturers, there were also contracts that went out to other firms. As the name suggests, Union Switch & Signal Co. produced switches and signaling equipment for railroads. They received a contract to produce 200,000 1911-A1 pistols, though the contract would be shortened with only 55,000 delivered to the government. This makes the US&S 1911-A1s the second rarest of all the manufacturers, behind only Singer who developed the educational material to allow non-firearms manufacturers to swiftly tool up to produce 1911 pistols. It is believed that when the drawings were originally delivered to US&S, the “P” proof mark on the slide was not included, leading to the early production US&S pistols not having the mark at all. When this was discovered, Ordnance requested that the marking be added to the pistol, but it appears that the location was not clear, with interim production guns having the marking notably left of center. The later production pistols had the marking in the same location as other makers. This slide’s “P” is roughly centered, consistent with the frame’s serial number. The pistol is in Very Good-plus condition with 90% of its DuLite finish remaining. The left of the slide has notable discoloration at the slide-stop notch. This location saw spot-hardening during the manufacturing process and it’s possible that this discoloration is from normal hardening, though it is more severe than we have seen on other examples. Apart from this spot, the finish appears original. Perhaps it was a worker’s first day, or just a rough morning/late evening. The pistol’s left grip panel has also been replaced while its right panel is a correct Keyes Fiber Co. panel. The bore is semi-bright with sharp rifling and the mechanics are still strong. This pistol should garner a lot of interest from the collectors of WWI and WWII pistols, and 1911s in particular, but should also still make a fun shooter. Please see our photos and good luck!