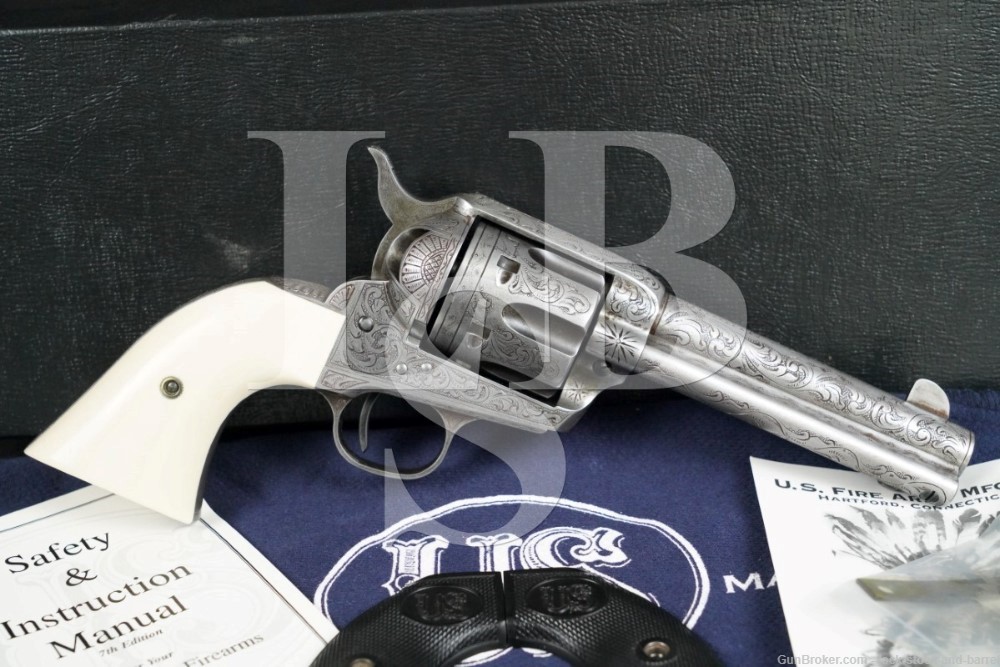 Markings: The left of the barrel is marked “.45 COLT” on a banner, the top is marked “U. S. F. A. MFG. Co  / HARTFORD. CT. U.S.A.”. The left of the frame is marked “PAT. SEPT. 19, 1871 / ” JULY, 2 – 72. / ” JAN.19 -75.”. The bottom of the frame, trigger guard and backstrap are each marked with the serial number “58659”. The rear face of the cylinder is marked “659”. The rear of the loading gate and the rear of the frame each have assembly number “1388”. The assembly number is also hand-scribed on the side of each portion of the grip frame and the inside of each original grip panel. The barrel, ejector housing, frame, cylinder and grip frame have extensive Western-style foliate scroll engraving with punch-dot fills. The left of the frontstrap is signed by the engraver “J. ADAMS”.

Type of Finish: The finish is “Antiqued”, with most surfaces appearing worn to white with minor discoloration.

Finish Originality: The Gunslinger was offered with a factory Antiqued finish, but given the extensive engraving, it may have seen an additional Antiquing process after engraving.

Overall Condition: Given that the overall appearance of the handgun is intentional, it’s difficult to put a percentage on the remaining finish. There is finish in the cylinder flutes and stop notches as well as some other protected areas. Most exposed surfaces are worn to white and there is scattered minor discoloration, but it is difficult to determine what is intentional and what is from actual oxidation. There are some scattered minor nicks, scuffs and handling marks. The action shows operational wear, mostly in the lead-in grooves on the cylinder. The screw heads are sharp. The markings are clear. Overall, this handgun rates in Fine-Excellent condition as customized.

Mechanics: The action functions correctly and quite smoothly. Cylinder lockup produces barely perceptible play on each chamber. The trigger is crisp. The cylinder has a removable bushing. The firing pin is conical and there is no window in the loading gate at the hinge, indicative of US-made parts. We did not fire this revolver. As with all used firearms, a thorough cleaning may be necessary to meet your maintenance standards.

Box, Paperwork & Accessories: This revolver comes in a two-piece cardboard USFA box with black exterior, green interior, manual, the original grips as described and a blue cloth USFA pouch. The original mainspring is included. The box has light storage wear.

Our Assessment: Colt’s Model 1873, the Single Action Army, is the “gun that won the west”, perhaps the most iconic handgun of all time. For nearly 150 years, the gun has been produced in a variety of configurations, finishes and calibers. The USFA SAA revolver is the absolute closest to a Colt you can get without a pony on the side. This example has a 4 3/4″ barrel and is chambered for the .45 Colt cartridge. The conical hammer and lack of a window on the loading gate where it enters the recoil shield are indicative of parts which were produced in the USA, not with the Italian parts used to assemble some USFA revolvers. Since then, it has been to noted engraver John Adams as well as having new grips fitted and installed (though the original grips are also included). John Adams worked as a freelance engraver for Colt’s starting in 1976. Adams was selected by Ruger to engrave some 400 Red Label shotguns, engraved many guns for the Rocky Mountain Elk Foundation, and has done work for notable customers such as Tom Selleck and Sammy Davis Jr. This classic USFA Single Action Army, chambered for a classic cartridge, is a nice example of Adams’ work, with an old-west feel and a beautiful overall “Antique” appearance. It will make a fine addition to any collection in America. Please see our photos and good luck!