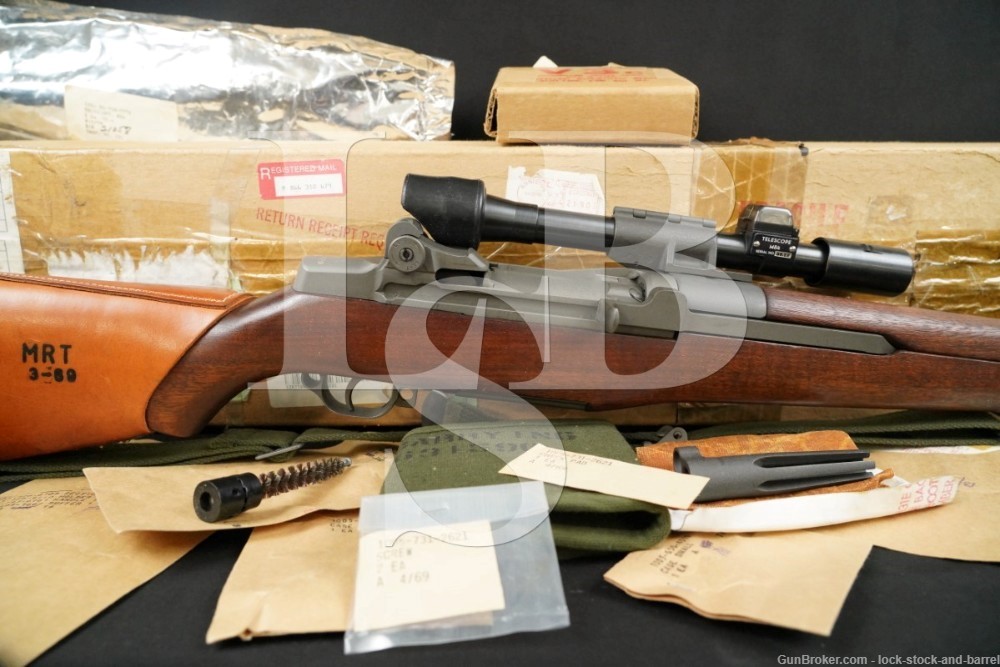 Sights / Optics: The front sight is a blade set between two protective wings. The rear sight is a fully adjustable aperture set between protective wings. The windage knob is marked “LEFT arrow” twice and “DRC”. The elevation knob is marked from “2-12” in increments of two.
The scope is attaches to the rifle with a two piece hinged mount. The mount has an included screw with an oversized head that mates with the base installed on the barrel. The scope is an M84 2.2 power that uses a thin post reticle. The scope appears to have been refurbished or repaired in the past as it no longer has a tapered post reticle (this is common). The scope has a sliding sunshade on the front of the tube and a rubber eyepiece on the rear. It has two adjustment knobs under metal flip caps that turn. The top knob is marked “0 1 2 3 4 5 6 7 8 9”. The side knob is marked “20 15 10 5 R 0 L 5 10 15 20”. The scope is marked “TELESCOPE / M84 / SERIAL NO. 21058” on the side plate.  The tube & sun shade show scuffs & light scrapes. The rubber eye piece shows scuffs. There is a small black fleck near the center of the view. There is a cloudy spot in the top right of the view. The remainder of the view appears clear. Overall the scope assembly is in about Very Good Plus Condition. The scope mounts show scuffs & light scrapes. They are in Very Good Plus to Fine condition.

Stock Configuration & Condition: The left side of the buttstock, under the pad, is marked with a partial Springfield Armory stamp “S.A. in a box” and an Arsenal Rebuild stamp from the Raritan Arsenal “RA”. The face of the grip is marked with a “circled P” proof.
The three piece oil finished stock has a pistol grip, metal nose caps, two sling loops, stacking loop and a metal buttplate with a hinged door for storage. The refinished buttplate has surface erosion and scratches showing through the finish. The wood shows scrapes, scratches and handling marks that have been oiled. The LOP measures 13 1/8 inches from the front of the trigger to the back of the buttplate. The stock rates in about Very Good Plus to Fine overall condition.

Bore Condition: The lands are bright, the grooves are semi bright and the rifling is deep. There is some fouling in the grooves which should clean up a bit. There is a small amount of light erosion at the muzzle. The bore shows an M.E. of 1.5. The throat shows a T.E. of 2.7.

Overall Condition: This rifle retains about 98% of its metal finish. The metal shows scuffs and light scrapes. The right side of the receiver shows light operational wear. The markings on are well defined. Overall, this rifle rates in about Very Good Plus to Fine condition as refinished.

Box, Paperwork & Accessories: The rifle comes with an M84 scope assembly; see above. The rifle comes with a canvas scope case, canvas sling, leather cheek piece, T-37 Flash Hider, chamber brush, its original shipping box from the Civilian Marksmanship Program (CMP), long term storage packaging and paperwork documenting its purchase from the CMP.
The scope case can be attached to a belt. It is marked “CASE CARRYING / 7631596”. It comes in a cardboard storage box. It is in Excellent condition.
The canvas sling is marked “MRT / AUG 1964”. The metal shows scuffs. It is in Fine condition.
The leather cheek piece is marked “MRT / 3-69”. It uses leather lacing to secure it to the stock. It comes with 2 cheek pad screws which are still in their plastic bag. It shows light scrapes & compression marks as well as discoloration. It is in Very Good Plus condition.
The flash hider shows light marks and is in Fine condition.
The chamber brush is in its storage bag. It is in Very Good Plus condition.
The shipping box has postage from the CMP in “ANNISTON ALABAMA”. It shows discoloration, tape residue and tears. It is in Good condition.
The rifle comes with paperwork that documents the purchase of the rifle from the Civilian CMP in 1995. We do not have a CMP Certificate of Authenticity, but we do have a shipping invoice from the CMP. The shipping invoice lists the rifle’s serial number on the front & back. The invoice is also marked “RIFLE CAL. 30 M1D COND A SERVICE GRADE W/E”.

This Springfield Armory M1 Garand was originally produced back in 1943 and was later Arsenal converted to an M1D Sniper rifle. At some point it was Arsenal Rebuilt at the Tooele Army Depot and is marked accordingly on the receiver leg. It was placed into storage and eventually sold through the CMP. This M1D comes with a M84 scope assembly, canvas scope case, canvas sling, leather cheek piece, T-37 Flash Hider, chamber brush, its original CMP shipping box, long term storage packaging and paperwork documenting its purchase from the CMP in M1D configuration.
The Springfield Armory barrel is marked properly with the correct date and stampings on the side of the barrel. This rifle was refinished after it was purchased from the CMP. The metal finish & wood look good and the bore is strong & bright. This is a Nice M1D Sniper for your collection.