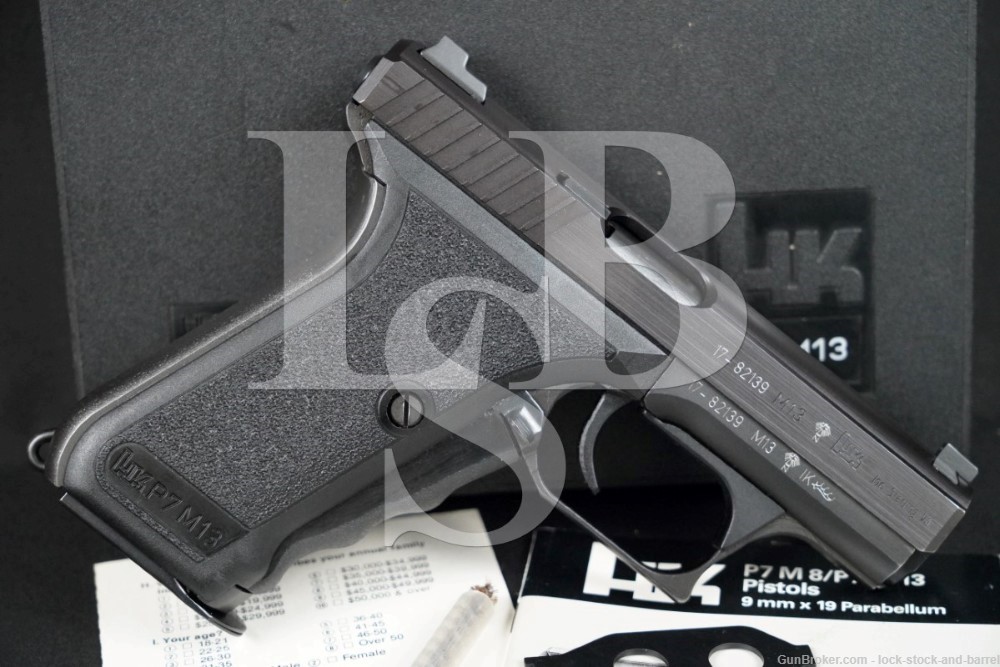 Stock Configuration & Condition: The grips are high-strength polymer with textured sides, showing a few scattered light marks and some scuffing at the bottom of the right panel. There are no cracks or chips. The grips rate in about Fine overall condition.

Overall Condition: This handgun retains about 97% of its metal finish. The finish is lightly thinning at some edges, most notable at the leading edges of the slide flats and trigger guard. There are a couple of faint spots of thinning on the backstrap at the top and back of the slide. There is a spot of dark discoloration from previous oxidation on the backstrap at the bottom. There are a few scattered light marks. The screw heads are sharp. The markings are crisp. Overall, this handgun rates in about Fine Plus condition.

Box, Paperwork & Accessories: Included is a serial matching case, cleaning rod in its protective sheath, gas cylinder cleaning tool, and a single 13-round magazine. Please note, no magazine will be included if prohibited by your local laws.

Our Assessment: The decision to equip West German police with an advanced 9mm service pistol and replace existing 7.65mm Browning-caliber weapons was prompted after the 1972 Munich Olympics Massacre. The new firearm was to meet the following requirements: chamber the 9×19mm Parabellum cartridge, weigh no more than 1,000 g (35 oz), the pistol’s dimensions would not exceed 180 × 130 × 34 mm, it should have a muzzle energy of no less than 500 J and a service life of at least 10,000-rounds. The pistol was also to be fully ambidextrous, safe to carry with a loaded chamber and able to be quickly drawn and ready to fire instantly. As a result of a competitive bid the German police forces selected three different pistols into service: the Swiss SIG Sauer P225 (designated the P6) and two German designs—the P7 (officially designated the PSP) and the Walther P5. Series production of the P7 started in 1979. Shortly after, the pistol was introduced in a higher capacity, double-stack frame, just in time to be submitted to the US Army trials to replace the 1911. Though the trial ultimately resulted in the adoption of the M9 from Beretta, the P7M13 is still considered by some to be the best version of the P7 series. This pistol was made in 1989 and is in Fine Plus condition. The polygonal rifling is still highly formed with no erosion and the pistol has a superb trigger pull that is initiated by squeezing the fore grip of the grip frame. Its blued finish has only the slightest of wear and it appears this pistol was used seldom if at all. It comes with its original box, gas cylinder scraping tool, and a total of one 13-round magazine. Please see our pictures and good luck!